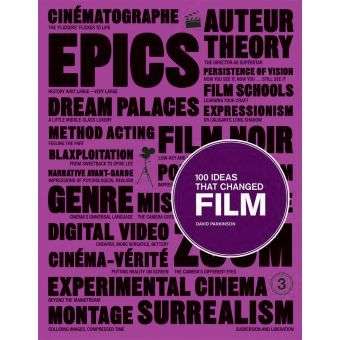 As the recent Sight & Sound Critics Poll shows there is nothing critics / film academics & historians / cineastes love more than a good list (even if it’s just so they can argue vehemently about said list). So David Parkinson’s 100 Ideas That Changed Film should inspire more than a modicum of a debate as – much like it says on the tin – it examines the 100 most important ideas that influenced the development of the medium.

The book itself is something of a cross between a coffee table affair and primer in film history (Parkinson describes it in his introduction as an ‘alternative history of film’). There are some truly lovely illustrations and the book works on its own as a collection of stills. The content is eclectic, going from sound to chase sequences, from method acting to sequels. Whilst it sometimes feels slightly random it also has that great feeling of a book that you can dip in and out of at a moment’s notice. By the book’s nature each entry is relatively brief but Parkinson (well known for his exemplary coverage of world cinema and festivals in Empire over the past few years) manages to be concise and clear without ever feeling slight.  The book would certainly work as an introduction to some of the important aspects of film studies for the novice whilst even those who have spent a life steeped in academia will probably find themselves coming away with one or two new facts.  And those who are just fans of cinema will enjoy everything it has to say and – more likely than not – arguing passionately about why a certain idea should have been left out and another put in.

It’s a simple yet elegant book that would find a nice home amongst cinema reference books and make a good gift for the film fan or academic. Just get ready for discussing it long into the night.