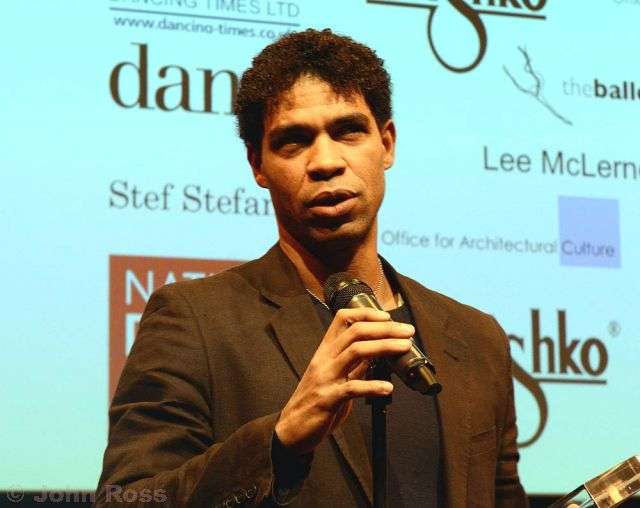 The Awards, hosted by Arlene Phillips, were held at The Place on 26 January. The Outstanding Company of 2014 was English National Ballet and the award was accepted by the company’s artstic director and principal ballerina, Tamara Rojo. The De Valois Award for Outstanding Achievement presented by Darcey Bussell was given to Carlos Acosta in recognition of his outstanding career as a dancer and as a producer of new work. The Jane Attenborough Dance UK Industry Award was presented to Frank Doran MP, Secretary of the All Party Parliamentary Group for Dance, in recognition of his work for the dance industry. Mr Doran, MP for Aberdeen North, is standing down at the General Election.

Jonathan Goddard in the title role as Dracula for the Mark Bruce Company.

Natalia Osipova in the title role in Giselle for The Royal Ballet.

Xander Parish in the title role in Apollo for the Mariinsky Ballet.

The winners with Dance section chair Graham Watts on the right. ©  John Ross.

Wendy Houstoun for Pact with Pointlessness.

Christopher Wheeldon for The Winter’s Tale for the Royal Ballet.