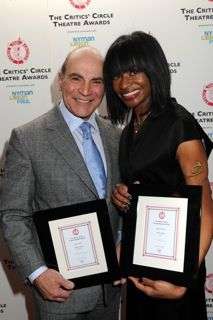 The Drama Section of the Critics’ Circle held its annual awards at lunchtime today at the Prince of Wales Theatre. They were introduced by Arthur Smith and hosted by Mark Shenton, Chair of the Drama Section.

Subsidised theatre almost entirely swept the board as the National Theatre, Royal Court and Donmar took most of the prizes. David Suchet who collected the award for Best Actor for his performance in ‘All My Sons’ was the sole representative of a commercial production, although even here, an earlier version of that production had first been presented at the National Theatre.  Astonishingly, Thea Sharrock was the first woman to win the Critics’ Circle award for Best Director for her production of Terence Rattigan’s ‘After the Dance’ at the National. She shared her prize with Michael Grandage for ‘King Lear’. Grandage was winning his fourth award. Sharrock spoke of hers as part of a healing process, which has seen Rattigan’s reputation as a fine playwright restored and some critics regretting their earlier hostile reviews.

Derek Jacobi won the Jack and Wendy Trewin Award for Best Shakespearean Performance for King Lear. Sadly, he was unable to be at the lunch himself as his voice is suffering from the stress of playing King Lear eight times a week. Instead, it was collected by the youngest member of the cast, Pippa Bennett-Warner, who plays Cordelia and who spoke of how much she had learnt from working with Jacobi.

Best Musical is usually an area in which commercial theatre triumphs but this year it was won by ‘Matilda’ the musical which is currently playing at the RSC in Stratford upon Avon and is destined later for the West End. Several of the young girls playing Matilda were in the audience.

Jenny Jules won the Best Actress award for ‘Ruined’ at the Almeida in which she played Mama Nadi, a woman who runs a bar and brothel in the Democratic Republic of Congo. After thanking the production team and her family, she dedicated her award to the women in the Congo who were struggling to overcome the terrible war injuries described in the play.

It was mentioned that Jules had once said she would like to play Cleopatra at 50. This was picked up by David Suchet who suggested he could be her Antony. Does the Critics’ Circle have a new role as casting director? Suchet made a generous speech, which included the rare confession from an actor that he reads his reviews and has occasionally learnt something.

Many thanks to Arthur Smith who set an informal tone by inviting all present to turn their mobile phones on while issuing a warning that critics are not as skilled at public speaking as they are at the written word. He went on to criticise our dress sense, lack of height and rotundity while never approaching Ricky Gervais levels of cruelty.  Those presenting at least rose above such low expectations.

Best Actor: David Suchet in All My Sons

Thea Sharrock for After the Dance

Most Promising Playwright: Anya Reiss for Spur of the Moment

The Jack Tinker Award for Most Promising Newcomer (other than a playwright): Daniel Kaluuya for Sucker Punch

The awards were presented in association with Nyman Libson Paul Chartered Accountants, and supported by Delfont Mackintosh and lastminute.com.