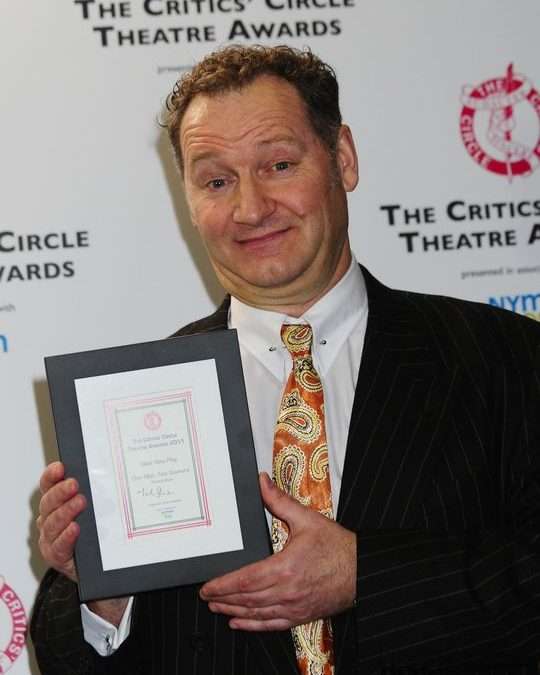 The National Theatre was the big winner at the Critics’ Circle Theatre Awards 2011, which were announced at the Prince of Wales Theatre on Tuesday. As usual, the awards were hosted by the Chair of the Drama Section, Mark Shenton, who welcomed everyone to a celebration of the theatrical successes of 2011. These awards are more informal than most, lacking nominations or short lists. Shenton pointedly commented that there was no room for horse trading here. As if to emphasise this fact, for the first time he chose to read out the long list of people who had been nominated for each award. Some of the lists were so long that a few of the winners must have wondered whether they got more than a couple of votes.

The list of National Theatre winners included: Richard Bean for ‘One Man, Two Guvnors’, now playing in the West End; Alecky Blythe and Adam Cork for ‘London Road’, which Blythe announced will return to the National and play in the Olivier in August; Mike Leigh for his production (and creation) of ‘Grief’; Benedict Cumberbatch for his performances in ‘Frankenstein’ (no sharing with Jonny Lee Miller this time); and Mark Tildesley for the spectacular design of ‘Frankenstein’. Many of these recipients made a point of praising the National for the skill and encouragement of all its staff under the leadership of the two Nicks, Hytner and Starr.

The West End was given a single nod with Sheridan Smith winning Best Actress for her moving and restrained performance in ‘Flare Path’. Most unusually, the only other theatres featured were the Donmar, Finborough and the Bush.

Only Benedict Cumberbatch was unable to attend and asked his director, Danny Boyle, to stand in for him. Star of the moment, Eddie Redmayne, was there to collect his performance for Best Shakespearean Performance and James Corden was much in evidence giving his support to Richard Bean.

Almost all of the recipients were spilling over with gratitude and humility. Newcomer Blanche McIntyre generously suggested that there was more theatre knowledge in the room than in Ancient Athens. Fortunately, Mike Leigh and Richard Bean can be relied upon to add a note of acerbity. While Leigh deplored the bad taste of those critics who didn’t approve of ‘Grief’, Bean spoke of his ‘loyal friends in the Critics’ Circle’ with more than a touch of irony.

As in previous years, Arthur Smith provided an entertaining and scurrilous warm-up, beginning with the promise to donate his fee, possibly not very large, to the Royal Yacht fund.

The awards were presented in association with Nyman Libson Paul and supported by Delfont Mackintosh Theatres.

Presented by Michael Coveney of whatsonstage.com

Presented by Kate Bassett of the Independent on Sunday

Presented by Michael Billington of The Guardian

Presented by Libby Purves of The Times

Mike Leigh, winner of Best Director, with Danny Boyle, the director of ‘Frankenstein’, who collected the Best Actor’s Award on behalf of Benedict Cumberbatch © Stephanie Methven

Presented by Charles Spencer of the Daily Telegraph

Tom Wells for The Kitchen Sink

Prsented by Paul Taylor of The Independent

Presented by Caroline McGinn of Time Out

Some of the Press Coverage