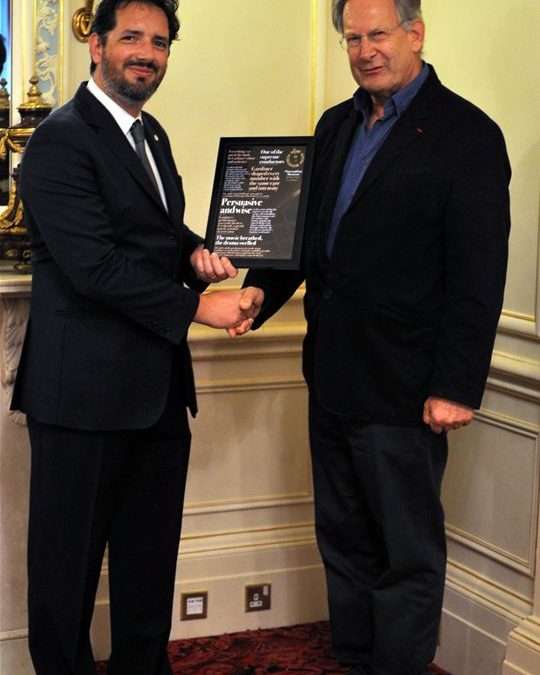 Our 2013 Critics’ Circle Awards for Music are as follows:

The announcement was accompanied by the following press release.

In its centenary year, the Critics’ Circle today announces its third annual Critics’ Circle Music Awards and is proud to confer its 2013 Award for Outstanding Musician on John Eliot Gardiner. The award is presented later this month at a ceremony at the Royal Opera House, where Gardiner is currently conducting Le Nozze di Figaro.

John Eliot Gardiner is that rare figure among musicians in being both a household name and an artist of uncompromising vision. His exceptional creative energy and drive is as immediately palpable today as it was when he founded the Monteverdi Choir almost 50 years ago, and is equally evident in his live music making as it is in the stream of new projects on which he embarks every year. In this, the year of his 70th birthday, also the year which marks the fruition of his visionary and vast Bach Cantatas series, it is hard to think of a musician in our lifetime who has done more to shape and change the way we listen to music, both directly through his own creative work and also indirectly, through the generations of musicians he has guided and inspired.

The Critics’ Circle Awards are unique across the industry on being voted for by the 76 members of the Critics’ Circle’s Music Section, in recognition of musical activities in the United Kingdom during the previous calendar year and, in the case of the Outstanding Musician Award, for a continuing career of international significance and exceptional artistic achievements. In contrast to other awards panels, Critics’ Circle members are unusual in remaining judges all year round, collectively listening critically week-in week-out to more concerts and recordings than any other sector of the industry. The shortlists are therefore drawn from the widest possible pool and established independently of any third-party nomination system. Consensus in such a passionate and experienced community is not easily won, but when established speaks volumes about the quality of the artistry and musicianship singled out for praise.

The Outstanding Musician Award is the Music Section’s most prestigious award. The previous laureates are the composer Oliver Knussen and the conductor Daniel Barenboim. Also announced are the Critics’ Circle Awards for Exceptional Young Talent in music. Presented each year to musicians under the age of 35, the awards are intended to recognise both achievement and promise across three categories: Singer, Instrumentalist, and Conductor or Composer. The 2013 awards are being made to the conductor Ryan Wigglesworth, the counter-tenor Iestyn Davies and the pianist Yevgeny Sudbin.

Founded in 1913, the Critics’ Circle is a professional association of British critics of dance, drama, film, music, visual arts and architecture. Membership is by invitation from the Circle’s Council. The organisation’s aims are to promote the art of criticism, to uphold its integrity in practice, to foster and safeguard members’ professional interests, and to support the advancement of the arts more generally. In addition to an annual award voted for by all members of the Critics’ Circle – the Critics’ Circle Award for Distinguished Service to the Arts – each section of the Critics’ Circle has its own Awards. The Music Section awards were reinstated in 2011 and are now in their third year.