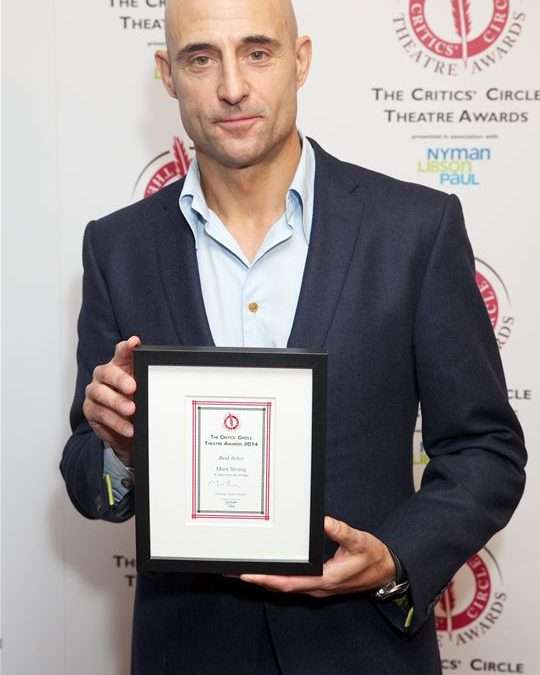 Best Actor: Mark Strong for his performance as Eddie in 'A View from the Bridge' © Piers Allardyce

Once again, the Critics’ Circle Theatre Awards, held at the Prince of Wales Theatre, were a very different affair from other award ceremonies, partly because they are so much more informal, and partly because we have Arthur Smith as our warm-up. Much missed was his joke about the taxman which has become like an old friend. Instead, there was a good new one about a Russian critic (why Russian?) who went to see a play that started at 7pm and went on to 11. About halfway through, he looked at his watch and was dismayed to see it was 7.20pm.

This ceremony is, of course, about celebrating those occasions when time flies rather than crawls. As the Standard awards increasingly chase glitz and glamour, it’s these awards, voted for by the critics themselves, that give a truer picture of where the most exciting theatre can be found. Happily, a number of this year’s winners have recently transferred to the West End and so can still be seen. Once again the Young Vic was dominant. Mark Strong, winner of the Best Actor award for ‘A View from the Bridge’ at the Young Vic, described how the play pulled him back into the theatre after so many years away, and also how discomforting it was to be told that they would perform in bare feet with no props. The director, Ivo van Hove, who denied Mark his shoes, was also a winner.

Helen McCrory, winner of the Best Actress award for ‘Medea’, and Antony Sher, winner of the John and Wendy Trewin Award for Best Shakespearean Performance, both claimed they had to be persuaded to take on their roles. Helen told presenter Georgina Brown that she had been terrified of the role and was only convinced by her husband, Damian Lewis, that she could play a woman who murdered her children. Antony Sher said that he had never ever thought that he would be right for Falstaff. ‘I realised I was being offered the greatest challenge for a character actor that there is, because I would have to change my body, voice, my whole inner energy to become him. So it became a great journey.’

Patsy Ferran, winner of the Jack Tinker Award for Most Promising Newcomer (other than a playwright) couldn’t attend as she was performing in a matinee of ‘Treasure Island’ at the National, but Michael Coveney memorably described her as having ‘witty elbows’ when she appeared in ‘Blithe Spriti’, something not seen, claimed Michael, since Maggie Smith. Jonathan Kent, winner of the Peter Hepple Award for Best Musical for ‘Gypsy’, was surprised to discover a member of his cast serving drinks in the foyer.

Out of all those either presenting or accepting awards, it was Dominic Cavendish who sprang the biggest surprise when he delivered a speech written entirely in iambic pentameters as a tribute to Mike Bartlett’s ‘King Charless lll’. Not surprisingly, it left the playwright speechless. Here are Dominic’s final verses:

At times a light capering jest and then

Again, some thought to sting the mind awake.

With craft and guile and insight he did ask:

What will Britain be when Queen’s reign will end

And does the state a constitution need?

He brought to utterance what deep lies hid.

Those who have not yet seen this Charles the Third

Must fly forthwith to Wyndhams here hard by.

And Rupert Goold, director most regal.

Performances sublime and without spite!

But lest you fear I almost did forget

For Mike I would invite upon this stage

To take his due – he has amazed the age;

At least the Critics Circle, near as good.

It made a terrific finish to the ceremony.

Many thanks to our loyal sponsors Nyman Libson Paul and to the support given by Delfont Mackintosh Theatres. Thanks also to Catherine Cooper for organizing the event.

Festival Theatre, Chichester, to be followed by 2015 transfer to Savoy Theatre, London

Mark Strong in A View from the Bridge

Ivo van Hove for A View from the Bridge

Es Devlin for The Nether