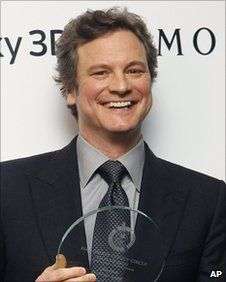 Terrific acceptance speeches were the standard, with witticisms coming from Aaron Sorkin, Best Supporting Actress Olivia Williams, Colin Firth and a gracious, amusing acceptance from Kristin Scott-Thomas, who was given the presitigious Dilys Powell Award for Excellence in Film. Accepting by video were Gareth Edwards, in a funny pro-UK acceptance speech cheekily recorded near the Hollywood sign, and a particularly nice acceptance speech from the bearded writer of ‘Of Gods And Men’ Etienne Cormar.

Chairman Jason Solomons hosted the event (in good style – Ricky Gervais could take a few tips), with presentations from critics such as David Gritten, Rich Cline, Anna Smith, Robbie Collin and others. Bubbly sponsorship was everflowing, thanks to Moet & Chandon.