All change at The Stage 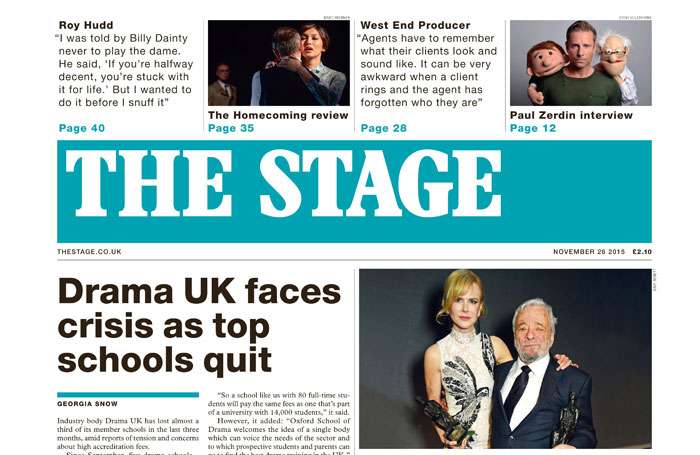 A face lift for the showbusiness bible.

… and some harsh words on awards

The Stage is even older than we are. The Circle has been going since 1913, The Stage for 135 years. Set up in 1880 has a new look. Editor Alistair Smith says they wanted to unite the paper and its website under a single design to reflect the fact that readers could access all the great news, reviews and features The Stage offered in whatever way suited them – be it in print, on a mobile phone, tablet or computer.

The print redesign followed a comprehensive revamp of editorial content and means the retirement of the paper’s famed black and white masthead replaced with the new white on teal version designed for the relaunch of the website in February.

Smith said the new website design had proved extremely popular so they were now rolling it over into the weekly print newspaper. Readers would still be able to enjoy everything they were accustomed to getting from The Stage, but presented in “a cleaner, more modern and easy to digest way.”

The Stage is the bible for all in the performing arts industry so  it was important that the relaunch edition be newsworthy. As a result out came the claws in an editorial in which Mr Smith expressed his views on the London Evening Standard theatre awards, views which seem to have struck a chord elsewhere. The paper under its current proprietor Evgeny Lebedev is very much it’s master’s voice and the Twittersphere and Facebook had people remarking how things had changed in recent years and not for the better.

Dismissing the awards as “the Evgeny Lebedev show,” Alistair Smith said that it was not that any of the winners were undeserving, and indeed some great talent was recognised. It was more that they were entirely predictable. “Rather than being the gold standard of quality they once were the awards now appear to be entirely in thrall to celebrity,” he said. “A bit of glitz is great, but you can have too much of a good thing. This year the awards slipped in to self parody.”

There is no getting away from the fact that it was not so much the winners who featured in the subsequent reporting of the awards but the dresses almost worn by the various celebrities, notably Salma Hayek, the Hollywood star, who turned out to present them. It was also none too clear from the Standard just who decided who got what.

At least the Circle, whose Theatre Awards voted for by the 110 or so members of the Drama section will be revealed at the end of January, is not in a glass house when it comes to looking at what others do. We are throwing no stones, leaving that to Mr Smith. The voting for our awards is transparent, there is no pressure to “create” a red carpet event, although we do get big names turning up to accept them and the event held in the Prince of Wales theatre is undeniable stylish and well organised. But celebrity is not the name of the game and there are no “dresses” strutting down our red carpet. It is quality of performance, of direction, of the artistic standards achieved that count. We have yet to vote, but it will be interesting to see to what extent our voters agree with whoever decided who got what at the Standard awards.