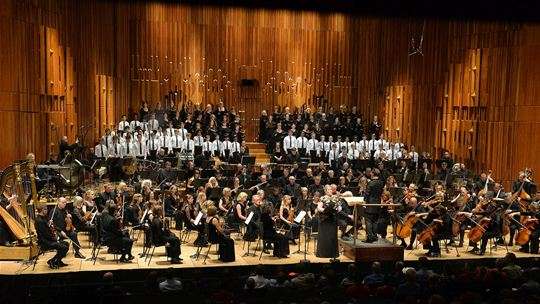 When Friedrich Nietzsche was asked in what category he placed his book Also Sprach Zarathustra, he replied ‘Symphonies,’ so it was appropriate when, in the same year as Strauss’ wordless version, their contemporary Mahler set a text from it at the heart of his Third Symphony, completed in 1896. This first attempt to set philosophy to music, where poetry or the Bible had previously been preferred, opened the BBC Symphony Orchestra’s new season last night away from home at the Barbican.

The dry, unforgiving acoustic is more of a test than the general ambient smudge at the Albert Hall, the orchestra’s summer residency as host of the Proms. In Barbican Hall the audience is on top of the players and sees clearly that the sinuous solo flute blows from beneath a moustache almost as transverse as his instrument, or that the impressive solo trombone has no facial hair at all. Chief Conductor Sakari Oramo pointed straight to Helen Vollam as first of the soloists to be applauded and she rose from her seat to a roar. She had played her epic first movement solos with resonant fluid tone, melodious natural phrasing and unflinching accuracy, where horn and posthorn had struggled and made the air seem more arid than it was.

Vollam had the authoritative volume of a Nietzschean ‘God is dead’ pronouncement over the responsive strings. She pre-echoed Nietzsche’s solemn warning ‘O Mensch!’ enunciated in the round column of Karen Cargill’s mezzo-soprano throughout the quietly ominous fourth movement at the symphony’s core. The singer’s trombone-like tone rang with all the grief of the twentieth century in her repeated wail ‘Tief ist ihr Weh’ (deep is its [the world’s] woe). The ascending fiddle solo cry appended to it was eloquent under the bow of leader Stephanie Gonley. Instruments coloured in humanity’s crowd scene. The clarinet glissandoed with a dismissive sneer.

The Women of the BBC Symphony Chorus sang with folksong-freshness the angelic fifth movement while the trebles of Trinity Boys Choir did Croydon proud as they sang from memory their onomatopeic tolling refrain – bim bum, German for ding dong. Then at last, voices, percussion, wind and all soloists fell silent for the communal body of strings which command the attention for more than half the finale. Oramo has cultivated a depth to this bedrock sound which is starting to have the profundity of a philosophical wisdom.