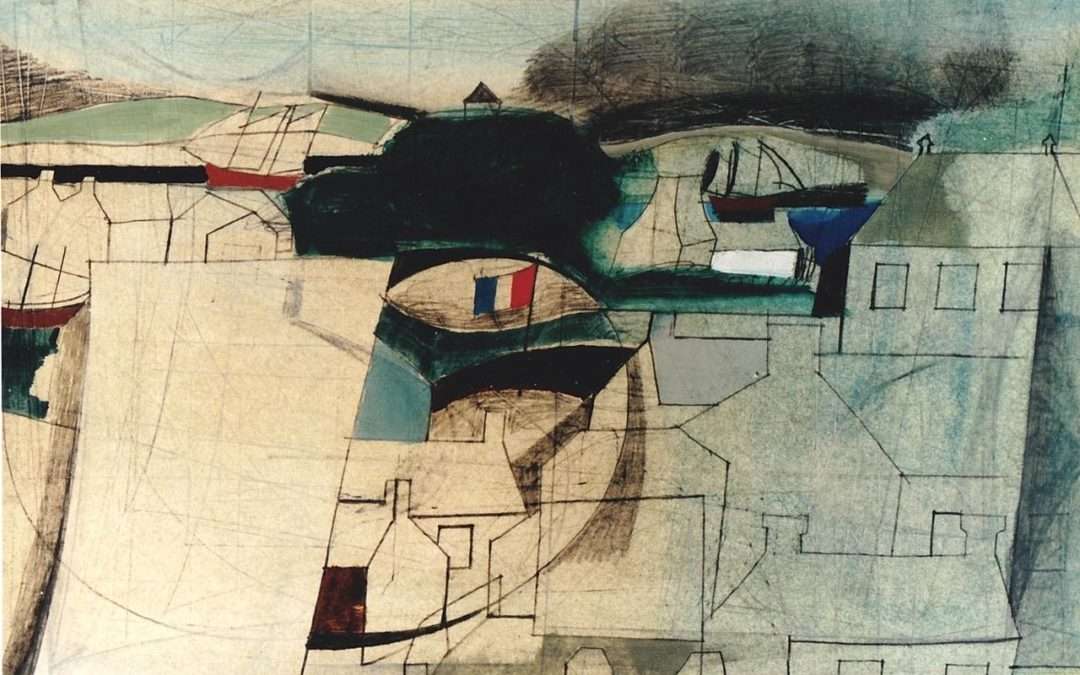 Treboul, Brittany, 1954 Oil and pencil laid down on board

As with many artists, Ben Nicholson’s letters have long been hidden away in archives, being freed only occasionally by scholars. He was a prolific, lively and informative writer of letters, notes and publications of various sorts all through his life, and this small, well-illustrated selection now makes many of his unpublished letters accessible for the first time. While notes and extracts for publication are written for a wider public, it is in his letters we find his personal, private voice. By far the majority published here were written to his first and second wives, Winifred Nicholson and Barbara Hepworth, as well as to his eldest son, Jake. Here we find his quiet humour and honesty over his struggle on the slow path to abstraction with his work.

He also corresponded constantly with friends and trusted supporters – Herbert Read, Adrian Stokes, Jim Ede, Margaret Gardiner – and his closeness to personalities in international modernism comes across, Mondrian, Henry Moore, George Braque and Picasso among others.

Son of the painter William Nicholson, he was an alumnus of the Slade School of Fine Art. These were details that for him played a minor role in his development. “I like to discover things for myself,” he said to the Sunday Times in 1963. The value he placed of “new development” tellingly appeared in a description of his father’s “best” work, still lifes and small landscape paintings. He seems to damn them with faint praise by saying he thought they lacked “the seeds of a new development”, (letter to Herbert Read, 25 September, 1944). Yet in 1936 he had written “I admire very much the way he tackles his work & makes progress all the time.” (Letter to Winifred Nicholson, June, 1936).

This published selection covers a wide range of subjects: art and its making, living with art, landscape and place, exhibitions, publications, influences and inspirations, travels. They were chosen by the Ben Nicholson expert Dr Lee Beard, Director of the Ben Nicholson Catalogue Raisonné project. Beard also contributes a clearly written introduction and contextual notes for each section.

Nicholson’s search for new materials, his experience cutting different boards, his developing interest in the effect of shadows as an element in his reliefs, his explorations of space, depth and colour, are all expressed and examined in letters to his two wives. He writes of applying several coats of white paint to his reliefs, both flake white and titanium, mentioning the technical inconvenience of having to let each dry. But eventually he achieves “a marvellous glistening deep silver white” (letter to Winifred Nicholson, 29 June, 1935).

The physical isolation of his total absorption in his work also come forcefully across: “I have been working so hard, at times I have hardly spoken for days. I did 10 paintings in one fortnight, not reliefs but new carved paintings that is using colour in a carved way” (letter to Winifred Nicholson, 16 August, 1934).

Beyond the making of his art, he expresses his concerns over and the effects of display and exhibition. He voices his clear views on framing. Of abstract expression he wrote that he thought it “both musical and architectural, where the architectural construction is used to express a ‘musical’ relationship between form, tone and colour…” (‘Notes on Abstract Art’, in Herbert Read, Ben Nicholson, Paintings, Reliefs, Drawings, Lund Humphries, London, 1948).

The text is illustrated with almost 50 images of his work: handwritten illustrated letters, exhibition hangs, Nicholson at work and the works themselves. Among them is a letter to his son Jake, at that point only 13. He writes: “I must say I only like purely abstract paintings when the artist has arrived at them by working for a long time from something actual – rather like painting a bottle & a plate & a mug on a table, which becomes, after a long time, shapes and colours taken from the bottle, plate, mug, table and from that they go on…” This description is interspersed first with a drawing of a table with plate, mug and bottle in perspective, then with a more abstract, cubist-type image of the same subject and finally with small shapes of what the plate, mug and bottle have become. It is a letter full of encouragement to his young son.

The book was brought to my attention by the Crane Kalman Gallery who are promoting it and where the launch was held. It is a book that can be simply dipped into or read cover to cover, both equally rewarding approaches. It is well referenced, and as each personality appears in the text they are introduced in the notes. Anything that makes primary source documents accessible is to be commended and this small publication does just that. It is a very informative treasury.