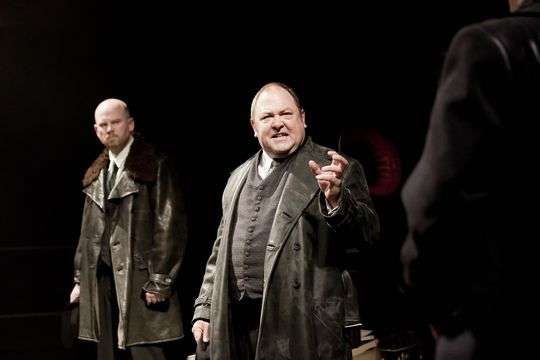 John Hodge wrote the screenplays for,among others, Trainspotting, Shallow Grave, A Life Less Ordinary, and The Beach, all directed by Danny Boyle. His latest screenplay, Trance, co-written with Joe Aherne, currently in production, is also directed by Boyle. Given Boyle’s association with the National Theatre – he directed the hugely successful Frankenstein there earlier this year – it is perhaps unsurprising that Hodge’s first play, originally conceived as a film,  has opened in the Cottesloe and will run in repertory until the end of  March next year. It is a blistering black comedy about the plight of the Soviet dramatist, Mikhail Bulgakov, whose play, The White Guard, was Stalin’s favourite drama. He saw it 15 times. In 1938, at the height of the tyranny during which millions of Russians were killed on Stalin’s orders, Bulgakov was asked – instructed is a better word – to write a play about the dictator’s early life as a revolutionary.
Suffering from the kidney disease which would eventually kill him Bulgakov had no alternative. The play looks at the dilemma the artist living under a tyranny faces – how to survive, and how to keep faith in what one believes in at the same time.

Alex Jennings as Mikhail Bulgakov and Jacqueline Defferary as his wife, Yelena © The National Theatre

It is Hodge’s first play. He says he was commissioned in 2007to write a screenplay, the principal source for which would be Simon Sebag-Montefiore’s Young Stalin, a vivid and wonderful account of the tyrant’s early years. Trying to work out how to do it he discovered a footnote about Bulgakov and his play, which seemed to provide a way in. It didn’t find favour with the money men, and Hodge embarked on a television mini series on the subject. The director of the proposed film suggested the original version of the script might make a play – and that is what has happened. Bulgakov’s play, Batum, a pale imitation, according to Hodge, of his other work was never performed. Stalin changed his mind.

Hodge has created a fantasy in which the overwrought and ill dramatist, played superbly by Alex Jennings, imagines
encounters with the dictator – Simon Russell Beale oozing faux bonhommie. Stalin writes the play he has demanded, while Bulgakov, harassed by a jovial and sinister NKVD man, Mark Addy, tells him how to rule Russia– with disastrous results.

Black and very funny, it will be screened on the 1st December in 120 UK cinemas as well as 600 more worldwide. The chances are, given its origins and the limitations of the Cottesloe – the set is complicated and bits of the action
are divorced from different parts of the audience – that it will look better on the screen. It makes a fascinating companion piece to two plays the National has staged recently  – Bulgakov’s The White Guard, and a stage version of Burnt By the Sun, Nikita Mikhalkov’s 1994 film about the terror.