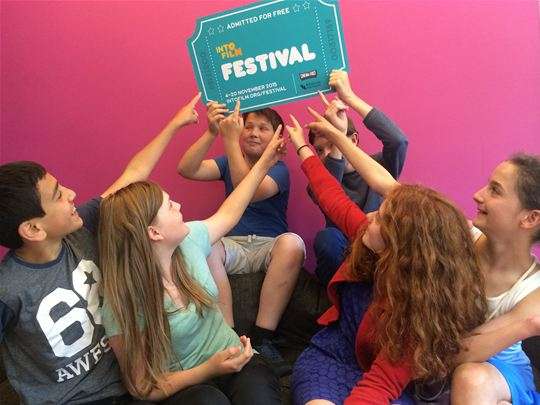 The "Into Film" Festival

To some, writing a film review is a specialised skill useful only in the media section of a GCSE English paper. As a teacher I think the skills required to write a film review reach far wider into the curriculum and into our adult lives. — Carrie McDonough, teacher and Film Club leader

Research shows that the majority of teachers say their students leave school for university without learning “essential” critical thinking skills. Critical thinking is ranked as one of the most important skills for success in higher education yet it is something that many students from primary all the way to sixth form struggle with.

Encouraging children and young people to critically analyse and review films is one of the most important elements of Into Film – an education charity, funded by the BFI, which seeks to place film at the heart of young people’s learning and personal development. At Into Film we believe, and feedback shows, that learning to critically analyse and review films can significantly increase young people’s engagement and attainment right across the curriculum.

In a recent survey 73% of teachers said participating in a school film club increases pupils’ critical thinking skills. Pupils who struggle with reading are able to express opinions about film far more easily than about text, and those who are usually reluctant writers often enjoy reviewing films, which, in turn, boosts their literacy skills and confidence.

Some of my boys who are reluctant writers are eager to complete film reviews and do so to such a high quality that I was pleasantly surprised, as they do not show that level of capability in class. — Sam Linton, Deputy Headteacher

To help develop young people’s critical and literacy skills through the medium of film, and highlight the skills of professional critics, Into Film has created comprehensive Review Writing Guides for primary and secondary, available to download free from its website. Learning to plan, structure  and write effective reviews can have a positive impact on other areas of academic performance and – who knows – may even encourage some youngsters to consider a career as a journalist or film critic themselves.

In English literature, film adaptations of novels and plays, studied alongside the text, can be used to develop students’ interpretation and understanding of narrative, character, form and language, as well as cultural and social context. Reading film as text will develop learners’ critical thinking, analytical and contextualisaton skills – skills equally applicable to and transferable between film and literary texts. Into Film has a number of teaching resources to support this including a new 19th Century Novels on Film resource and our Reel to Real resources produced in partnership with the V&A. It also offers CPD sessions in Raising Literacy Attainment Through Film.

In History, being able to view a film critically and write apt reviews helps with those vital analytical skills needed to examine sources. Watching and analysing a foreign language film is a perfect way to learn a language in context and explore cultural, social and political aspects.

Into Film provides a range of opportunities for teaching and learning through film, including free films clubs which provide access to over 4000 films, dynamic, curriculum-linked and enrichment teaching resources available to download free from the website, filmmaking opportunities, CPD and training for teachers – and the annual Into Film Festival, the worlds’ largest film festival for children and young people. This year’s Into Film Festival takes place from November 4-20 with a UK-wide programme of free screenings, workshops, special events and Q&As with industry professionals for 5-19 year-olds. We are delighted that the Critics’ Circle Film Section will be hosting workshops at the festival and also that its Chair Anna Smith was a judge at our Into Film Awards earlier this year. Both of these events are making the expertise of professional critics available to young people who may not otherwise have access to it.

The Into Film Festival 2015 takes place from November 4-20. All events and screenings are free. Register now for bookings information at www.intofilm.org/festival

To find out about Into Film or set up an Into Film Club visit www.intofilm.org