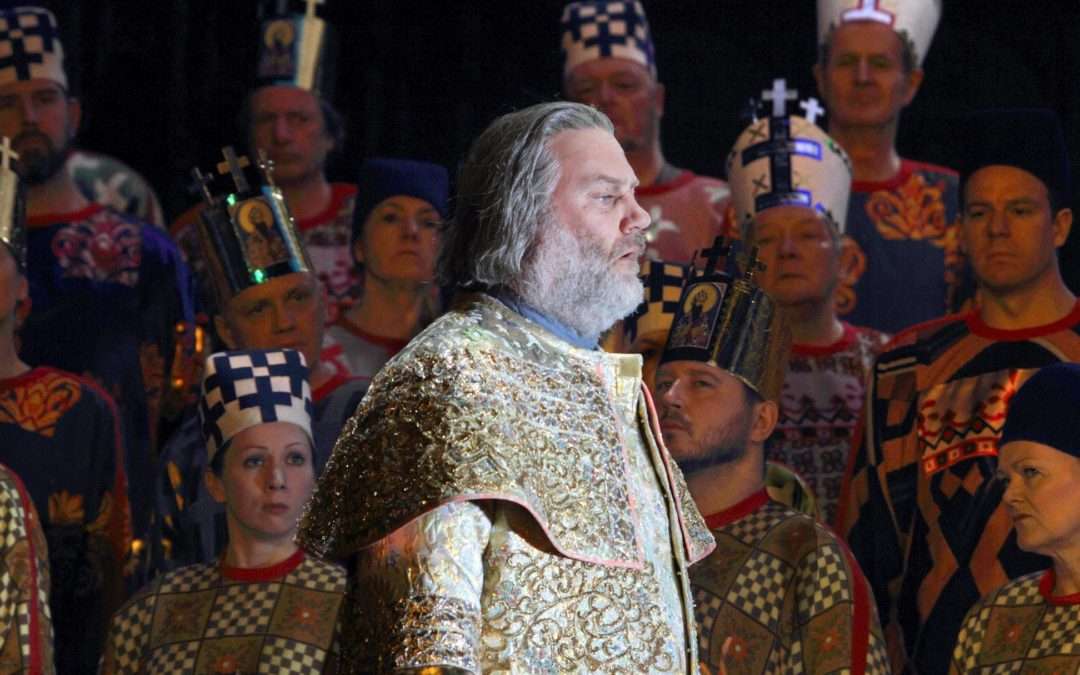 'Terfel’s bass-baritone was not ideal in colour for this majestic role.' (C) Catherine Ashmore

Richard Jones’s new Royal Opera production of Boris Godunov is excessively house-trained. Has there ever been so tidy a production of Mussorgsky’s sprawling epic? Admittedly this original 1869 completion, a version never before staged here (where the composer’s and Rimsky’s revisions have mostly been the norm) took fewer operatic liberties than the 1872 version which was designed for more conventional tastes. But the composer wanted to focus on truthful natural discussion between characters, how people really are, and bent his music to that end, whereas Jones has marshalled in an indoors environment both unruly Russian peasants and uniformed Boyars alike – doing what they are told (by him). In Miriam Buether’s single two-level hall set, we get no great outdoors for Novodevichy on the way to the colourful hotspot of the coronation, nor for the impenetrable scale of tundra and forest implied by the map studied by Boris’s son Fyodor. Nicky Gillibrand’s imaginative trad-blend costumes are well worth a look, though at Boris’s death with so much fur and beard she makes Terfel look like a dead sheep.

Jones shows us at the opening and three times thereafter a striking mime of the child Dmitry, younger brother of the last Tsar, having his throat cut. So no excuse if we fail to grasp the adult “Dmitry” (when we meet him) is a pretender. This, though stylishly done, was reminiscent of Covent Garden’s popular Turandot: too much choreographed movement is closer to Disney than the realism Mussorgsky craved. At the Lithuanian border Varlaam and Missail’s monkish episode has the cleanest provincial hostelry in Russia and the neatest hostess, while the dumb security seeking Grigory are very PC Plod; it’s all far too cold and over-controlled.

For the musical flood we have Antonio Pappano conducting with relish and sympathy, mapping an indelible path. Mostly the cast are an excellent home-grown team – John Tomlinson notably outstanding as Varlaam, and young Ben Knight from Kingston-on-Thames making a big impact in the role of Fyodor (usually a little mezzo). The Estonian Ain Anger was a superb Pimen, voicing his knowledge about what really happened to the dead Tsarevich but blind to the mind of novice Grigory (nicely done by David Butt Philip). Andrew Tortise relished the keening atmospheric melody of the Holy Fool. Kostas Smoriginas supplied some of the dark bass timbre the work invites.

Terfel in the title role and John Graham-Hall as his co-conspirator (and eventual heir) Shuysky played off each other well. Graham-Hall really needed more impact. Terfel’s bass-baritone was not ideal in colour for this majestic role which has been so memorably served by the deep darkness available to Kipnis and Chaliapin. And there was something wanting too in Terfel’s ability to convey the inescapable overhanging of fate and divine punishment. The wild side of the work did not quite register that shadow which deep black bass tone implies.