Borough: Bomberg and His Students at the Borough Polytechnic, Waterhouse & Dodd, London 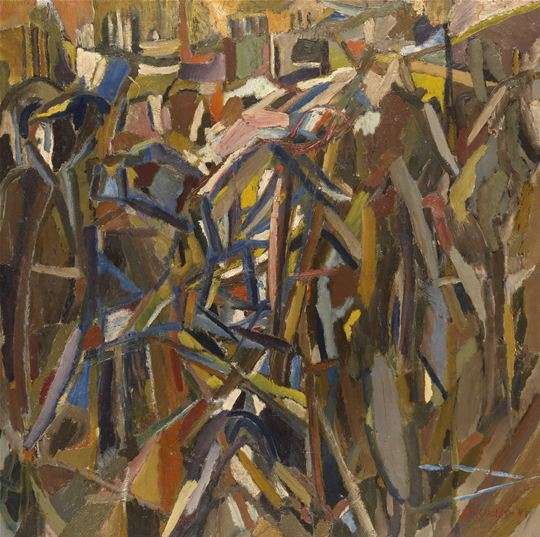 Was David Bomberg the most lastingly influential art teacher in Britain during the twentieth century?  A visit to “Borough: David Bomberg and his students at the Borough Polytechnic”, Waterhouse & Dodd’s current exhibition, prompts this question.  The show and the informative, profusely illustrated catalogue are evidence that Bomberg’s creed of the “Spirit in the Mass” continues to inspire long after he began preaching it to his students.

As Bomberg taught, his disciples grew: at the South East Essex School of Art, the City Literary Institute and, most importantly, from October 1945 at the Borough Polytechnic.  The following January, four of them – Dorothy Mead, Edna Mann, Cliff Holden and Miles Richmond – founded the Borough Group, Holden as president.  It would hold several exhibitions, Bomberg assuming the presidency in 1948, by which time Frank Auerbach and Lilian Bomberg – Auerbach as a non-exhibitor – had joined the classes.  Their fame grew, with Dinora Mendelson, Len and Dorothy Missen and Leslie Marr joining in 1948 and Dennis Creffield in 1949.

With the contentious Bomberg involved, progress was not always smooth.  After in 1950 Leon Kossoff joined Bomberg’s classes, like Auerbach as a Borough Group non-member, the Group was disbanded following bitter arguments about membership and the direction to take.  When in 1952 Mead, Holden, Richmond and Creffield staged a show in Sweden, Bomberg disliked a reference to him in the catalogue, holding Holden responsible, causing a rift.  Despite this, Holden remained a vociferous supporter of Bomberg’s art and teaching, his rejection of traditional academic attitudes and ability to encourage self-belief and free expression.

Although Bomberg ceased teaching at Borough Polytechnic in 1953, he, his step-daughter Dinora Mendelson, Marr, Kossoff, Garth Scott, Richard Michelmore, Roy Oxlade, Cecil Bailey, Gustav Metzger and the sculptor Anthony Hatwell set about forming a new group, Borough Bottega, which had four exhibitions, the last in 1955.  By then, Bomberg had returned to Ronda in Spain, where he had spent time before the war, the subject of some of his most powerful landscapes, eventually dying in London in 1957.

Nearly 70 years later, there has been a surge of interest in his and his students’ output.  In 2013, Annely Juda’s gallery organised an exhibition of Kossoff’s London landscapes, also shown in Paris and America.  Waterhouse & Dodd put on a welcome show of Mead’s work in 2014.  Now, Frank Auerbach at Tate Britain, Dennis Creffield at James Hyman Gallery and Miles Richmond at Messum’s are increasing exposure.

Bomberg’s legacy continues to inspire the work of younger artists, too.  Lucy Creffield, met recently at an open studios event in Wales, is producing strong, gestural works clearly influenced by her father.  And at the permanent Borough Road Gallery in southeast London, opened in 2012 based on Sarah Rose’s collection, Sarah Sluglett, resident artist there, tells in the Waterhouse & Dodd catalogue how the work of Mead has affected her.