British values should be preserved 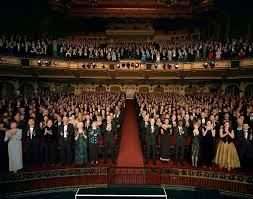 Here they are - standing. But why?

The curse of theatre going especially in London has become the standing ovation. No matter how dire the show, especially on a first night, the audience gets to its feet, although some members do so reluctantly it has to be said. The definition of a standing ovation is that it is a form of applause where members of a seated audience stand up while applauding after extraordinary perfformances of particilarly high acclaim. Well not any longer, particularly in the West End theatres although the habit has spread to the fringe as well. The practie, an American one, has spread, like so many things, across the Atlantic and London audiences, especially at musicals or events featuring living legends, are standing up like lemmings.

The critic Lyn Gardenr has said the standing ovation has become a phenomenon so common that it sometimes felt as if a show that did not get one must be a bit of a failure, while Michael Billington, who has been to more first nights than most, has said that while he was all for spontaneous enthusiasm the standing ovation was a “filthy American habit” that should be discouraged. At the first night of a big musical for instance they were clearly orchestrated affairs in which backers and friends tried to convince themselve and everyone else they had been present at a major contribution to Western civilisation. The standing ovation had been turned into a hollow gesture.

I could not agree more. There is nothing wrong with a standing ovation as such. But it has to be earned, not given as a matter of course.  The result is that the first night reports, not written by critics but by showbusiness reporters, mention the standing ovation and everyone gets misled as to what has been unveiled on stage One could, of course, remain seated, although that can provoke the ire of those standing and does mean that one cannot see what is happening. The living legend, for instance, might cease to live. In those circumstances even critics must become reporters.

Applause when the living legend or the visiting Hollywood seeking endorsement of their talent by actually appearing in a play on the London stage star walk one is one thing. Warm applause at the end to mark the fact that are still living or have even done well is fine. Shout bravo if you must. But why stand up? When it happens at the show that we all know in our heart of hearts is not going to run and run, why encourage false hopes in he hearts of the cast by over egging the pudding. It is time to restore British values in British audiences.

As for those who ululate……but that is another story.