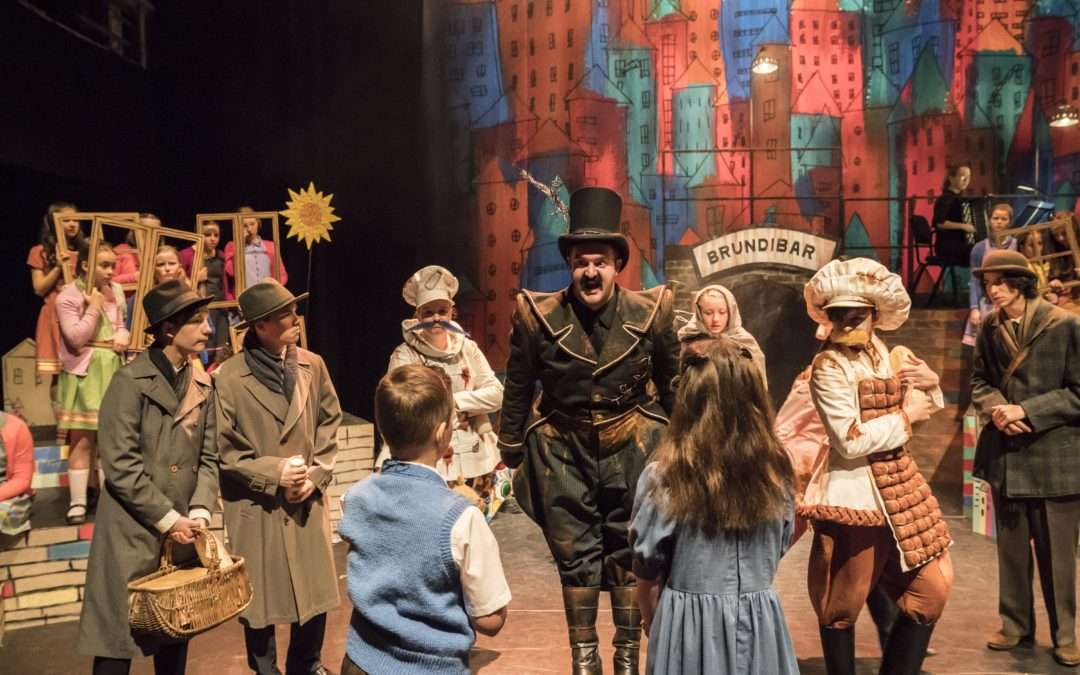 Hans Krása’s Brundibár is perhaps the only opera given its early performances by a cast on death row.

Written for a competition, it was first performed in 1942 in the Jewish orphanage in occupied Prague. The second performance was put on in the place now called Terezín in the Czech Republic. This had been an Autro-Hungarian garrison town named Theresienstadt; it was turned by Hitler’s government into a vast ghetto. As a model concentration camp (and thus a work of fiction in itself), Red Cross officials were brought there to have wool pulled over their eyes.  It was also a holding camp from which the internees would be taken to the execution factories further east.

The final opera in WNO’s admirable ‘Rhyddid/Freedom’ series of operas, Brundibár was presented in two casts.

Written for children, it is a simple story. A father has died, a mother is ill, the doctor says she needs milk. Her children (Alfie Jones/Jacob Adams and Manon Thomas/Penelope George) go to market but have no money. They try singing and begging, but are driven away by an aggressive organ-grinder, Brundibár himself (Steffan Lloyd Owen/John Ieuan Jones). The crowd is full of people with things to sell: a baker (Euan McEvoy/Rhiannon Spannaus), a milkman (Lauren Williams/Dylan Mingay), and an ice-cream vendor (Sophie Perry/Tara Jones), and the policeman (Josh Stanbury/Owen Parsons) insists that life is all about getting and spending. These were clothed by designer Bethany Seddon in cartoon peaked caps and jodhpurs, and sported colourful moustaches.

The next morning, a cat (Gracie Jones/Carys Davies), a dog (Anton Rogan/Dylan Tilley) and a sparrow (Megan Jones/Elie Gent) gather hundreds of children to help; their excellent chorus drowns out the bully, the collection is enough to pay for milk and the tale concludes with a chorus drawing the moral about making a stand. Given what we know about what happens next, the conclusion is both powerful and painful.

The whole event takes place in Bethany Seddon’s set of portable townscapes, with a sun and a moon on sticks which are raised and lowered to mark evening and morning.

Visually, the effect matches the music, being deceptively simple and sweet. The children’s costumes are similarly storybook, everyone neat and clean, and in old-fashioned little frocks and shorts.

Pepiček and Aninku, the begging children, are miked up, creating the usual disadvantage that their voices always seem to be coming from the wings.

On arrival, audience members are issued with yellow scarves by guards, who then lock the gates. The cast is marched in under whistled instructions, a bit like the entrance of the von Trapp children in The Sound of Music. This makes all possible points and is far better than Nazi flags, swastika armbands or giving the villain a toothbrush moustache. Praise and thanks to director David Pountney for not doing any of these. The device keeps faith with the piece itself, which similarly avoids direct comment on the circumstances of the time.

This half-hour piece was followed by a short film and then a speech by conductor Tomáš Hanus, whose mother sang in the Terezín production and survived, unlike so many other cast members.

The previous evening in the series was a double bill of Dallapiccola and Beethoven, bringing together one of the most famous items in the repertoire with one known largely just to people who follow 20th-century music closely.

In a slight change to Misty Buckley’s set from the preceding Heggie and Menotti productions, the action takes place stage right, separated by a raked walkway from a stage-left orchestra. This was all fine, and I’m sure there was a really good reason for shunting the chorus so far to the stage left that they were as far out of sight as a Berlioz cor anglais.

Luigi Dallapiccola’s one-act The Prisoner from 1949 opened with Sara Fulgoni grieving powerfully over her son’s imprisonment. Beautifully accompanied by a Mahler-sized BBC National Orchestra of Wales (not the WNO home team on this occasion) under Lothar Koenigs, this was one of the high points of the evening, with the lightly written score creating subtle and emotionally intense pairings. This is the kind of writing that gives serialism a good name. I’m not sure why Fulgoni was then left kneeling onstage for the rest of a show in which she never piped up again. All being well, she’d found time to nip over to Homebase and invest in a pair of gardening knee-pads.

Peter Hoare, kitted out as a gaoler, drops hints that the imprisoned Lester Lynch should not give up hope, and gives him news of the uprising in Flanders and the threat to Philip II (we’re in Don Carlo and Egmont territory). The eponymous prisoner escapes his cage to transcendental music, faintly reminiscent of the starlight at the end of Verklärte Nacht, in the evening’s second moment of intense musical riches and dramatic intensity. However, even as he rejoices, he hears Hoare’s voice again singing ‘fratello’ (the word of brotherhood that had convinced him the gaoler was a secret ally). Hoare is now costumed as the Grand Inquisitor; the encouragement was a duplicitous tactic to torture him with hope. The despairing baritone is led to his death by Huw Evans and William Stevens.

After the interval, we move back to 1814 and another continent-wide war in which states were destroyed. In Act 2 of Fidelio, Gwyn Hughes Jones is banged up and struggling with despair. Now it is a tenor is behind the bars and he accordingly strikes a more consistently heroic note (Jones is good at this Helden stuff), expressing faith in divine order and justice. While Dallapiccola’s prisoner is unnamed and never meets his mother, Beethoven’s is named, meets his wife and is rescued by her when Emma Bell pulls a gun on Lester Lynch, now in a smart suit as the corrupt Don Pizarro, boss of the prison and Florestan’s enemy. Wojtek Gierlach was an excellent Rocco, mounting the ‘only obeying orders’ Nuremberg defence and then declaring to everyone it was he who saved Florestan’s life. The International Court in the Hague knows Rocco well, frequently seeing him in the dock and the witness box.

The absence of Act 1 left Carly Owen’s Marzelline and Osian Bowen’s Jaquino in narrative dislocation. Still, any mystified audience member will have given up trying to figure out the subplot as the force 9 gale of a triumphant WNO chorus blew all before it.

This was a challenging and illuminating pairing for which WNO is to be congratulated. The contrast brought out the manifest modernity of Beethoven’s writing – the prominent use of dissonance, the occasional syncopation and slippery concealment of the pulse: he got rhythm – just don’t try dancing to it, because you don’t always know where he’ll take it and you. Both operas show the world as Pascal describes it, a prison from which the inmates are daily led out to die. But in Dallapiccola, the apparent ally turns out to be as snakelike as the Erlkönig; the fanfare that announces the arrival of Don Fernando (a white-suited, panama-wearing Daniel Grice) never sounds for the unfortunate baritone.