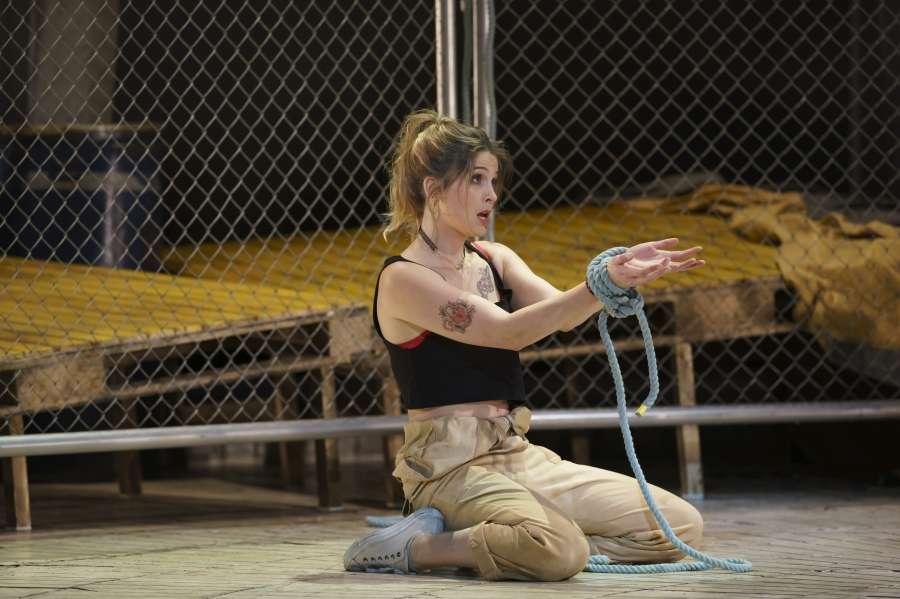 Can't tie me down: Virginie Verrez as Carmen - Photo by Bill Cooper

Bizet’s Carmen is a good example of the dark/fair contrast introduced to Romanticism by Walter Scott: here, Carmen’s (Virginie Verrez) smoking, drinking and all-round bad-girl mezzo v. Micaela’s (Anita Watson) clean-living soprano. The task for the fair-haired woman is to get the audience onside, and Bizet gives Micaela a head start in Act 1. Watson seizes her chance to win the sympathy vote. But of course that head start means she is really just the warm-up act. The audience knows perfectly well who the headliner is, and when Verrez enters she is given that showstopping habañera, a manifesto of free love and liberty: the musical equivalent of a landslide victory.

That Romanticism has something to do with revolution is well known from much-imitated images by Delacroix; Jo Davies’ production likewise hangs out a banner declaring liberty. Several of the crowd scenes look appropriately like a cross between a rowdy party and a political riot. Here the production really hits its stride. The gathering at Lillas Pastia’s bar and the arrival of Escamillo (Phillip Rhodes) is excellently done. The dancing by Josie Sinnadurai and Carmine De Amicis gives a visual focus to the gathering, and Sinnadurai then melts into the cast as Pastia’s waitress, coming back round reminding Verrez that when fortune-telling, Carmen dealt herself the death card. The toreador’s voice seemed to struggle at the bottom end of his range, but his character was rounded and well communicated. Of course he and Verrez are going to hook up: they’re both too shiny for their own good. José (Dimitri Pittas) is naturally more like Micaela and should have taken his mother’s advice.

After being musically and personally crushed by Carmen, José and Micaela are both given a further chance to be more than the mezzo’s cannon fodder. Watson and Pittas display some unexpected vocal steel. José’s solos and duets particularly allow him a bit of Heldentenor ringing.

Harriet Eyley and Angela Simkin as Frasquita and Mercédès succeed in creating real characters, particularly at key moments such as when the women gather around the dead body of Carmen. The various soldiers and smugglers, Ross Ramgobin, Henry Waddington, Benjamin Bevan, Joe Roche, also use the several ensembles and break-out solos to establish themselves.

Tomáš Hanus sets the orchestra a cracking pace in the overture: if you like it that way, it was full of energy and excitement; if you don’t, it was rushed.

The set (Leslie Travers) is designed to look like a combination of a walkways block of social housing and a bullring. This makes for a pretty reasonable town square in Seville, but is less happy as the mountain crags of the concluding smugglers action. The blocking means that while the bandits are singing about soldiers being below them on the slopes, the said soldiers are walking about above them in the walkways.

The fighting (Lisa Connell) was plausible, though some of those punches were being thrown as loosely as in a John Wayne bar brawl.

The costumes (Gabrielle Dalton) are vaguely mid-twentieth century, with the women from the cigarette factory coming out in overalls a bit like Rosie the Riveter. Carmen in Act 2 is smartly turned out as though following a trip to Galeries Lafayette, allowing the audience to remember that in Act 1 Escamillo was flush with money. The social-class associations of the new clothes are surprising, though; she seems to have turned into a Kristin Scott Thomas character. The soldiers are in military green and tote sub-machine guns. This is largely fine, except when the chorus sings excitedly about the sunlight gleaming on them and four men in fatigues march in, looking insufficiently refulgent.