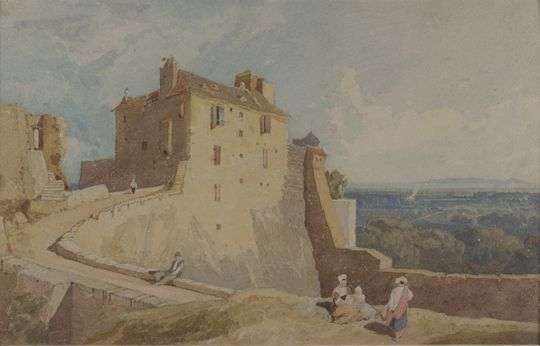 igures on the ramparts at Domfront 1823 John Sell Cotman - private collection. In the Cotman in Normandy exhibition at the Dulwich Picture Gallery.

The first and last rooms of this exhibition are the ones that admirers of John Sell Cotman will get the greatest pleasure from. They contain the watercolours. In the intervening room are mainly the etchings he made as a result of three trips to Normandy in 1817, 1818 and 1820. In all they added up to his spending six months touring the countryside there. His plan was to create a volume of etchings to raise money by tapping into the interest in things French in the aftermath of the Napoleonic wars. The book did not, however, prove the best seller he had hoped for. There is no denying they are splendid etchings as Cotman was a superb draughtsman. He was fascinated by the links between the architecture of the Normans in Britain – he had painted many of the Norman churches in his native county of Norfolk – and those in their homeland. The drawings at the least are a record of buildings often under threat but they are dead pictures unlike the watercolours. They are also studio works done from sketches he made on the spot. The watercolours on show do not disappoint, and neither does the exhibition as long as one is not expecting something it was not designed to deliver.

Entrance to the town of Falaise 1823. © Martin Gregory

Mont St Michel 1818. By permission of the Keepers and Governors of School.