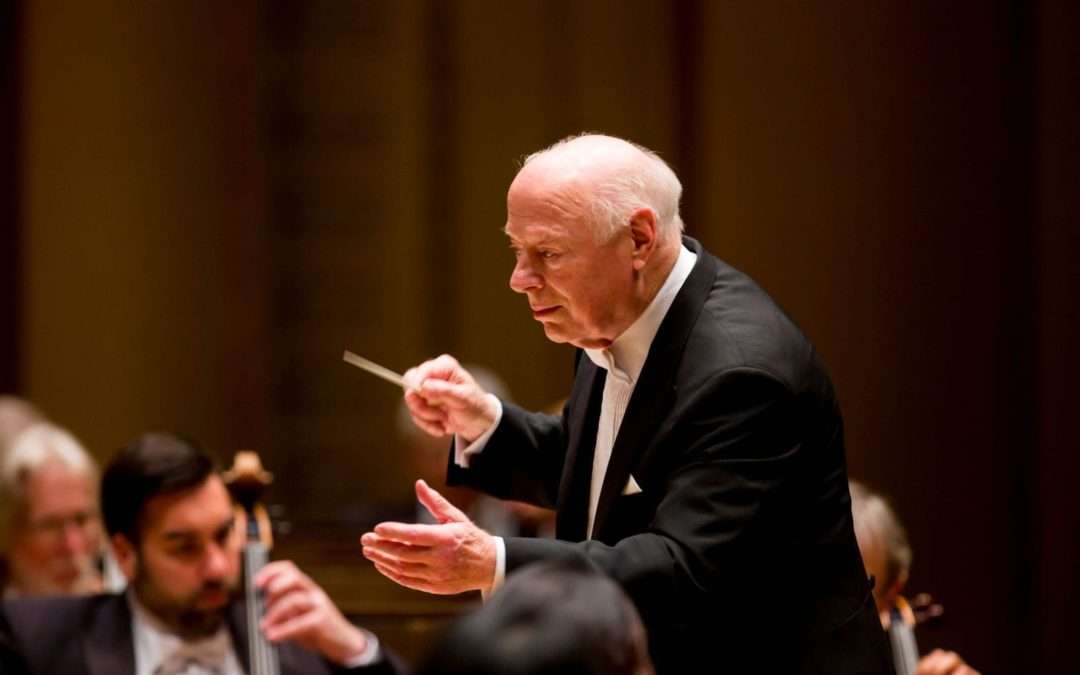 The Music Section of the Critics’ Circle is delighted to announce the winners of our Annual Awards for 2019.

The Lifetime Achievement Award is a special category, rather than an annual award, and is given here by the music section to a conductor whose career has had a profound effect on music in the UK, and who is held in great affection and esteem by the entire music world.

Our Young Talent Awards recognise that 2019 was the breakthrough year in the careers of the award winners.

The Best Opera Production Award is a new category which recognises the unique value of the ultimate collaborative artform, and celebrates the ambition and achievement of British opera companies.

It’s often written that conductors get better with age, but Bernard Haitink has always been a rock. You always knew exactly what you were going to get with a Haitink performance: thoroughly rehearsed, scrupulously faithful to the score, with no overblown gestures. And so it was again in 2019. His beat was as firm as ever in an unfussy, glowing Mahler 4 with the London Symphony Orchestra in March to celebrate his 90th birthday, but it was his concert with the Vienna Philharmonic at the BBC Proms that proved unforgettable.

It was Haitink’s final UK performance before a well-deserved retirement a few days later. He chose the same work – Bruckner’s Seventh Symphony – that had marked his 1966 Proms debut. Haitink was cheered to the rafters before he’d even conducted a note, but he brushed away the fuss with a wave of his stick before getting down to business – a rendition of remarkable fluidity, beautifully balanced, Haitink placing Bruckner centre-stage. This Dutch master was always a servant to the music. Mark Pullinger

Some conductors generate an energy that illuminates everything they touch. Maxim Emelyanychev is a compelling performer at the keyboard; but as a conductor in the opera house, on the concert stage and in the recording studio, he has repeatedly demonstrated that a lively understanding of period style and a generous collaborative spirit need not preclude music-making of thrilling dynamism and personality. Colleagues have admired his “terrific energy and panache” – “Emelyanychev is always inside the music” – and while his first season as principal conductor of the Scottish Chamber Orchestra has been curtailed, his debut recording with the SCO (Schubert’s Great C major Symphony) gives every reason to expect wonderful things from this partnership once normality resumes. Richard Bratby

Donghoon Shin, a 37-year-old Korean-born composer now based in London, impressed us with the precision of his aural imagination and his fascinating, unpredictable poetic sensibility. György Ligeti and compatriot Unsuk Chin are among his heroes, and the fantastical sound-world of his music does recall theirs at times, but he is no epigone. His teenage enthusiasm for jazz is still alive in him, and the Schoenbergian richness of his Kafka’s Dream points to another influence one might not suspect at first.

2019 brought two impressive UK premieres, including Anecdote, a concerto for sheng (a Chinese mouth-organ) and ensemble premiered by Wu Wei and the Birmingham Contemporary Music Group, which was by turns nocturnally atmospheric, hectically urban and nostalgic. There’s an urgency and generosity about the music which suggests he will just grow and grow. Ivan Hewett

Louise Alder has already become a favourite with British audiences for her gleaming, expressive soprano, a luminous voice that she colours with outstanding imagination and skill. Recent appearances have seen her sparkle in Strauss (as Sophie in Der Rosenkavalier), Handel and Purcell, and have especially showcased her stylish way with Mozart (as ENO’s Susanna, the Royal Opera’s Zerlina and Garsington’s Pamina). Yet the richness and breadth of her singing on Lines Written During a Sleepless Night, the glorious disc of Russian, Nordic and British song she recorded last year with pianist Joseph Middleton, are evidence of an artist seeking new challenges. And a look at her roles during the three seasons she recently spent as a member of the Frankfurt Opera ensemble, ranging from Handel to Menotti via Rossini, Verdi, Lehár and Puccini, suggests that audiences here haven’t yet had the chance to hear half of what she can do – a truly exciting prospect. Erica Jeal

When Pavel Kolesnikov made his Wigmore Hall debut in 2014, it was immediately obvious that we were in the presence of the rarest of talents. Kolesnikov balances intimacy with drama in his intensely personal interpretations, often daring in their originality. He draws wide-ranging colours from the piano with a touch notable for its deftness, clarity and poise. In 2019 Kolesnikov’s star reached a new zenith in the UK, with 29 performances around the country. Reviewing for International Piano, Michael Church wrote: “Pavel Kolesnikov approaches the keyboard with love in his heart and extracts from it a succession of spells”. October brought the release of Kolesnikov’s fifth album, Impromptus, waltzes & mazurkas by Chopin. Bryce Morrison wrote of the album: “Kolesnikov evinces his love of alternating exuberance and confidentiality, of rain and sunshine, pain and happiness”. His inauguration of a Ragged School music festival in a deprived area of Tower Hamlets testifies to his crusading vision. Owen Mortimer

With his strikingly clear, rich and rounded tone and the maturity of his music-making, British violist Timothy Ridout has been on our radars for some time, but to say that his career rocketed during 2019 is an understatement. UK triumphs included enthusiastically received performances at venues such as Wigmore Hall, being announced as a 2019 BBC New Generation Artist, and being awarded the 2019 Royal Philharmonic Society Allianz Instrumentalist Prize. His international profile was moving at a similar pace. February saw him win the Prix Thierry Scherz at the Sommets Musicaux de Gstaad, its award an acclaimed orchestral recording on Claves, plus debuts at the Konzerthaus Berlin, Heidelberger-Frühling, Montpelier and Aspen music festivals, and a residency at the Baden-Baden Philharmonie. With 2020 having already brought further good news such as a 2020 Borletti-Buitoni Trust Fellowship – just as he moves on from the Young Classical Artists Trust, where he has been since 2016 – we’re looking forward to watching what comes next. Charlotte Gardner

It’s not often that one encounters a production that seems to open up the meaning of an opera without the sense of a director’s heavy hand twisting it to satisfy his or her own ideological prejudice. But empowered by a superb cast conducted by Ivor Bolton and led by Toby Spence, Jaques Imbrailo and Brindley Sherratt, Deborah Warner’s vision of Billy Budd for the Royal Opera House, brilliantly designed by Michael Levine and magically lit by Jean Kalman, was that rare thing: a staging that grew organically out of the score and text to illuminate the motives and emotions of the characters through an interpretation of hauntingly resonant power. Rupert Christiansen

Biographical Note: Bernard Haitink has held Music Directorships with many of the world’s greatest orchestras since his first conducting appearance in 1954, but we remember in particular the 35 years when he led some of the most prestigious organisations in Britain. He was Principal Conductor of the London Philharmonic Orchestra from 1967 to 1979, Music Director at Glyndebourne Opera from 1978 to 1988, and Music Director of the Royal Opera House from 1987 to 2002. His recording of Beethoven’s nine symphonies with the London Symphony Orchestra was one of the most notable events of 2006. For his final UK concert in September 2019 he chose the same piece, Bruckner’s Seventh Symphony, he had conducted at his Proms debut over 50 years before. Haitink received an honorary knighthood in 1977, and in 2002 he was appointed an honorary Companion of Honour by Her Majesty the Queen.


All enquiries to Guy Rickards or Robert Thicknesse