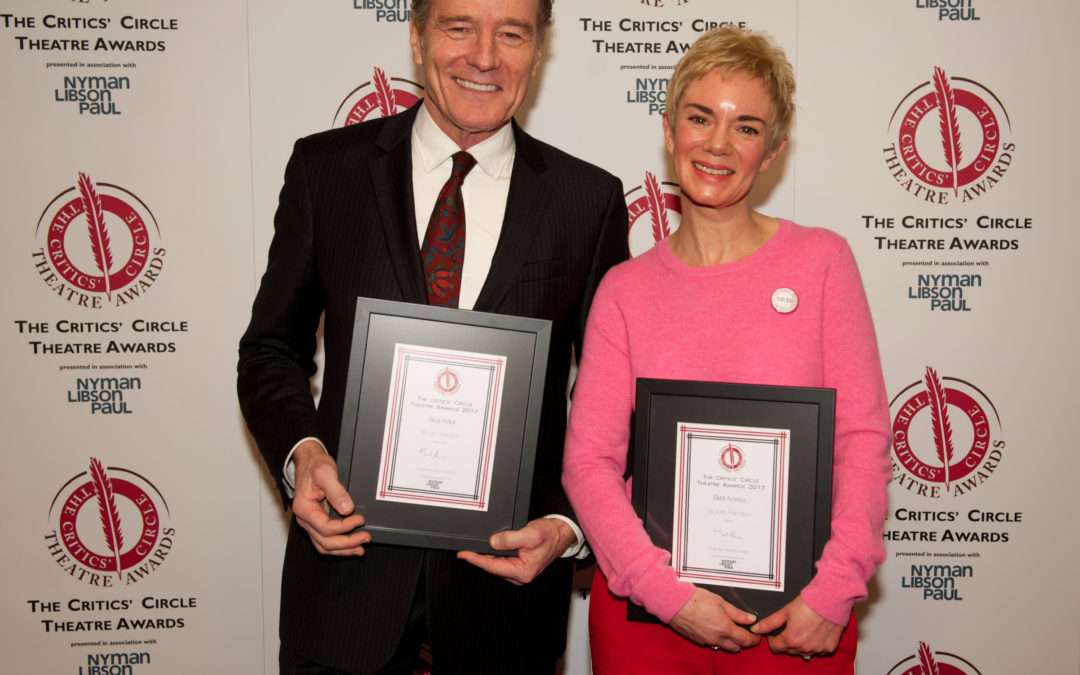 In a highly enjoyable lunchtime ceremony in the Delfont Room at the Prince of Wales Theatre, the great and the good of the thespian community got together to recognise the best of the best in the previous year.

As in recent years, Drama Section Chairman Mark Shenton introduced the event but, as a consequence of jury service, Arthur Smith made a new brief appearance to say hello, rather than delivering his trenchant jokes at the expense of so many of those present.

Instead, the session was punctuated by songs from three new musicals, one of them a winner. Four Queens led by Katherine of Aragon delivered a witty number from Six the Musical, there was a brief taste of Lin Manuel Miranda’s Bring It on and finally a touching song delivered by one of the most promising newcomers, John McCrea from Everybody’s Talking about Jamie. All met with positive responses from what should be a very discerning audience.

However, the main event of the day was the presentation of 10 awards, one of them received jointly.

While Jez Butterworth was unavailable to accept the Best New play award from Lyn Gardner personally, the event was graced by the presence of his director Sam Mendes, who delivered a short speech and got the biggest laugh of the event, courtesy of the writer behind The Ferryman. In a very strong year for new plays, this was a great accolade for Butterworth and very well deserved.

The Most Promising Newcomer Award is the one that was shared between John McCrea and Sheila Atim, who made such a strong impression in Conor McPherson and Bob Dylan’s Girl from the North Country.

Undoubtedly the best and most moving speech and a worthy homage to the power of theatre came from the winner of the Trewin Award for Best Shakespearean Performance, Andrew Scott. Anyone who saw his performance in Robert Icke’s Hamlet at either the Almeida or in the West End must have had the Irish actor down as a hot favourite for this award.

The most promising playwright, Brandon Jacob-Jenkins almost won twice over for An Octoroon and Gloria respectively at the Orange Tree and Hampstead. Indeed, in the American playwright’s absence his two directors, Paul Miller and Edward Hall jointly collected the award on his behalf.

There was an inevitability about the winner of Best Musical. Even before the show opened, the hype was so great that Lin Manuel Miranda’s Hamilton was just about a certainty, which was unfortunate for many other splendid shows that opened during the year. In his absence, five cast members took the stage to convey grateful thanks on his behalf.

The Best Designer and Best Director both came from the same show, Follies at the National. Dominic Cooke in particular might have been an unlikely winner, given that as Matt Wolf pointed out this was his first outing at the helm of the musical. Vicki Mortimer also did well to overcome strong competition in a good year for design.

In what was a very good year for the Almeida, there can have been few quibbles about the award of Best Actress to Victoria Hamilton, who followed up a witty alphabetical speech from Dominic Cavendish with a moving effort of her own.

Another award that seemed a surefire certainty was to Bryan Cranston for Network at the National. Pleasingly, he was present to accept the prize from Michael Billington and seemed genuinely grateful to add something new to what must be an overflowing trophy cabinet.

Finally, in a new venture, the Critics’ Circle has decided to create a Special Award, deservedly received by David Lan for a lifetime of achievement, a mere 33½ hours before he leaves the Young Vic for pastures new.

This article first appeared on www.britishtheatreguide.info