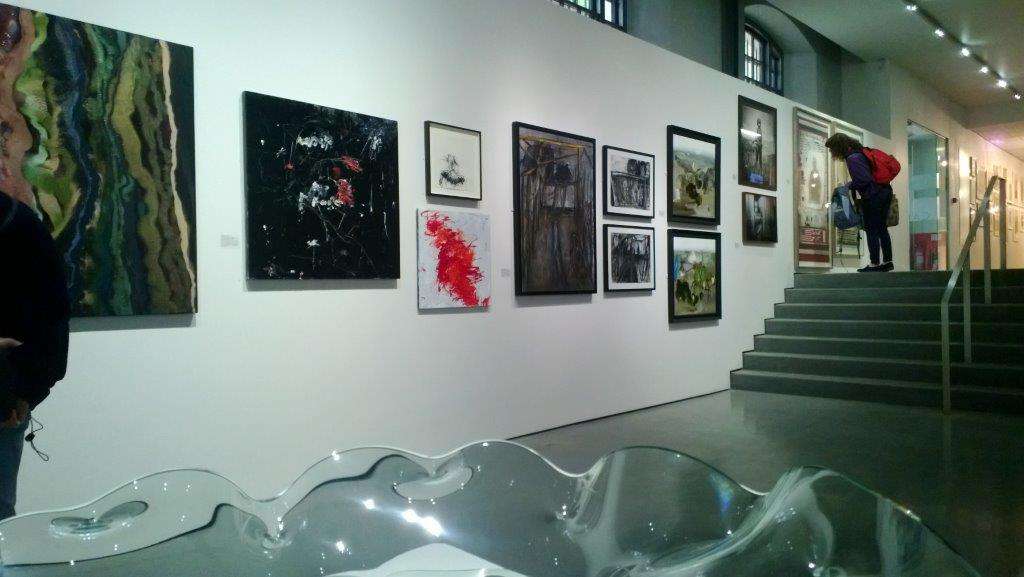 The Critics' Secrets exhibition in the Mall Galleries.

Some 24 members of the Visual Arts and Architecture section are preparing a show of their “secrets” at London’s Mall Galleries which will run from 10-15 June as part of our Centenary celebrations.

Corinna Lotz’ choice is London painter Frances Aviva Blane whose work is currently on view in Abele, a village on the Belgian French border.

Frances Aviva Blane’s show at De Queeste Kunstkamers in Abele gives a remarkable overview of the diversity of her ouevre.

A significant number of charcoal self portraits, paintings and a new diptych are brought together in a move beyond the last display at Dirk and Theun Vonckx’s Brussels gallery in autumn 2011.

In a contrast of figuration and abstraction she revisits the great issues which still operate in 21st century art. A thoughtful curation allows the self-portraits and abstract oil paintings to speak to each other, perhaps for the first time outside the artist’s studio.

Presented in a remote gallery on the Franco-Belgian border these often dark canvasses acquire an added resonance. The “psycho-geography” – the shadows of Flanders Fields where some 600,000 soldiers lost their lives in World War 1 – are part of the mental field of vision.

And by inviting such an inconoclastic artist DeQueeste takes forward Belgian avant garde history. Blane’s self-portraits being to mind the mask paintings of James Ensor, of Les Vingt, the artists who revolutionised European art in the 1980s. She also linkg up with the post-World War 11 CoBrA formation, which embraced the Belgian Revolutionary Surrealists, though, significantly, there were no women in those groups.

Throughout her career Blane has explored – indeed subverted – the powerful relation between paint and personality. In doing so, she brings to the surface a hidden and complex dialectic of form and content. She mines the properties of oil paint for all they are worth, deliberately taking it beyond the point of no return. The surface is tortured, scarred, scored, scorched and turbulent, sometimes even gouged out.

The large Red on Black at first appears simply a mass of tormented black. But hold your gaze: there is an increasingly lyrical dance of marks in and out of the apparent monochrome. The exquisite Letter-Grey floats clouds, scratched calligraphy and drips over and under a sky blue backgroung. In Pool, acrylic paint – unusually, since oil is standard with Blane – is thinned to its maximum dilution and dripped to form a sequence of silky layers. Night Red has a Whistleresque feeling of fireworks about it, but there are other billowing forms, modulated greys, brished into shadowy shapes suggestive of human forms.

Blane seeks to create marks she has never seen before. And we can experience in a concrete way how making a new form, like any birth, has a violent aspect – the old must be broken up, decomposed and go through torment. It requires daring, courage and moments of despair and self-doubt to achieve this. But the result is remarkable: the outcome of such destructive activity is a syntheisis with a different kind of integrity. These are indeed “highly personalised images with a content beyond their scale” as Valerie Wiffen has written.

So many questions are asked: how and why can marks on canvas and paper take on living qualities? Is this the real Midas touch that only human beings can impart to dead matter they work on? How does the substance, the “stuff” of paint and charcoal relate to our own bodies and minds? How does the “martyrdom” – the total break-down of material substance – affect our emotions? Why and how do we relate it to ourselves and how does it connect with our times?

Carved tusks and bones from the ice age, currently juxtaposed with champions of modern art like Picasso and Matisse at the British Museum, are evidence that artistic mark-making is more deeply ingrained in human beings than we have previously thought. Such primeval forms of expresssion arose long before humans began to articlate words and language evolved. This helps to explain why smells, feelings and sounds reach our subconscious and can arouse powerful emotions. They reach a deeper level of non-verbal communication.

When confronted with new work they find difficult, some will ask: “But is it art?” – with the subtext – what is the point of it? Over the 20th century conceptual artists since Duchamp have had great fun in playing with this as they stretched the boundaries of what was and was not possinle. And why not? But perhaps the game of epater le bourgeois has run its course and it is time to rediscover painting as a philosophical and emotional challenge.

Blane brings us up against that question in a different way. the emotional impact comes across willy-nilly – you can’t stop  iot – and then you as, what is the intention? What is being said?

The answer is a kind of defiance. Out of the depths of despair and anguish, something strong can be created. And not only that, but something aesthetically marvellous that extracts astonishing force and subtle beauties of colour and form from simply matter via simplicity of means and the sheer forces of personality. Forget the gimmicks, tricks and superificial ironmies that do the rounds of so many commercial venues. Here is the real thing.