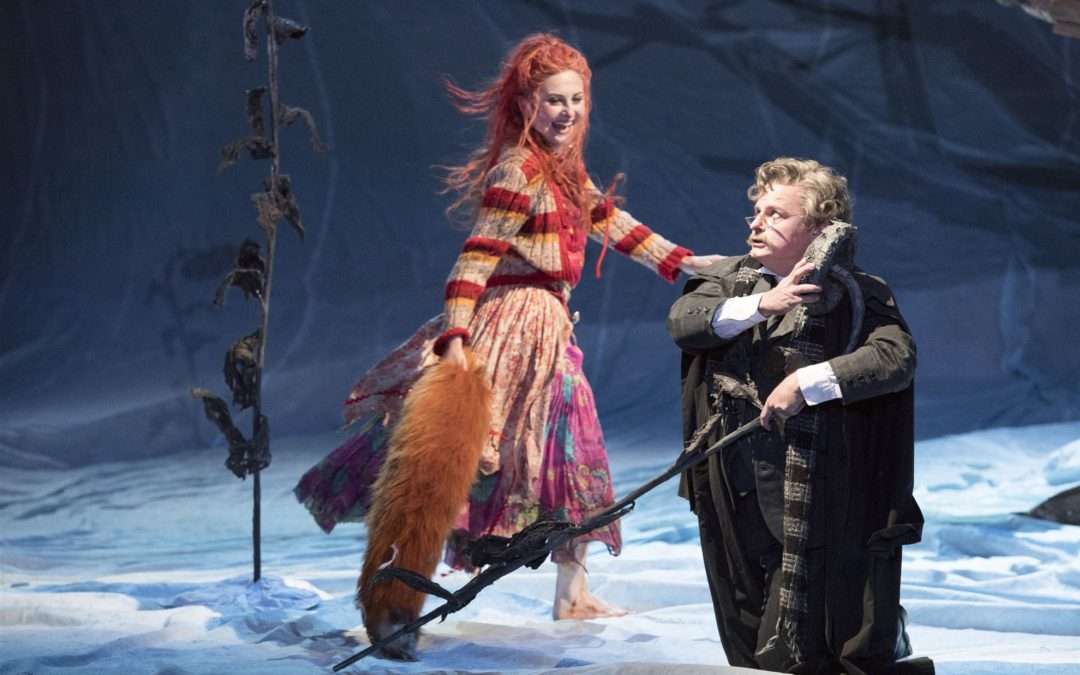 This was a bit of a memory-lane excursion for anyone who remembers the ’80s, a jaunty pop-video aesthetic created by designer Dinah Collin channelling Cyndi Lauper, Adam Ant and Dexys (I think I even caught a whiff of Alexei Sayle) in the riot of boho-chic, post-punk, free-spirit togs of the inhabitants of Janáček’s enchanted woodland. The humans are sepia-tinted monochrome by comparison, living in a physical and emotional half-light compared to the vivid games of the forest.

Melly Still’s production, which premiered at Glyndebourne in 2012, is bursting with life, colour and movement, indulging the piece’s balletic rhythms and flitting creatures with snatches of dance that reflect and enhance the sexy melancholy of an opera that flirts with Bambi-levels of cuteness but has such strength and contemplative wisdom that in the right hands it goes far beyond a Disneyfied romp.

The Vixen requires you to pay a lot of heed to the music, which even when “happy” contains Schubertian levels of sadness; the piece is half immersed in death from the beginning, not only in the elegiac playout. Still’s team – set designer Tom Pye, lampie Paule Constable, choreographer Mike Ashcroft – had their ears open, and even if this is a largely celebratory staging, extremely easy to like with its quirky fauna, pretty fairytale stage and clever, simple effects, it has time for the deeper side of things.

Underpinning everything is a serious and sensitive orchestral performance of this most romantic and wistful of scores, conducted by Jakub ​Hrůša, highly sensitive to the way the music, with its apparent sparseness and widely-spaced lines, manages to layer so many things at once – chattery winds and jabbing, almost expressionist strings meet folky cadences, Straussian epiphanies, ecstatic ardour in a sort of vertical bank of mixed affects and metaphors. It still sounds incredibly fresh and original, and I liked the almost bluesy swing Hrůša brought to the woodland music. He also whipped up epic highlights: the foxy love-story, stealthily developing into a duet as passionate as anything in opera, and the autumn scene with its fatalist falling violins over jagged staccato basses, presaging Sharpears’s death. The LPO played it with steel and caressing tenderness.

This Vixen had strong echoes of A Midsummer Night’s Dream: in the transforming forest and night, black-and-white humans dream in technicolour and their trammelled spirits burst free – even as the forest bursts into their world at the end of Act II, when the tipsy pub-goers wander out into the snowy wood and woozily indulge their fantasies. Janáček’s doublings – badger and priest, schoolmaster and mosquito – are filled out and celebrated as all the humans get a feral reflection; and the melancholy Schoolmaster, sadly longing for the unattainable Terynka (Sharpears’s human double), is touchingly presented as the ageing composer himself, twinkly-eyed but yearning, by Colin Judson.

The Ossetian soprano Elena Tsallagova is the most vivacious of Vixens, sweet, funny, vicious and clever; everything is centred on her and how the other characters relate to her. The romance with Alžběta Poláčková’s Fox has a really Straussian ardour, the hen-killing episode has never been more entertaining (Hannah Sandison a marvellously self-important Cockerel), and the interstices of the plot where one world shades into another through dance and enchantment are full of sensuality and meaning. The sad humans are good, too; Alexander Vassiliev turns from Maharishi-like Badger to the Priest whose wrecked life has made him ornery, and Christopher Purves is the Forester whom Sharpears brings to an understanding and acceptance of life, love, disappointment, ageing and death.