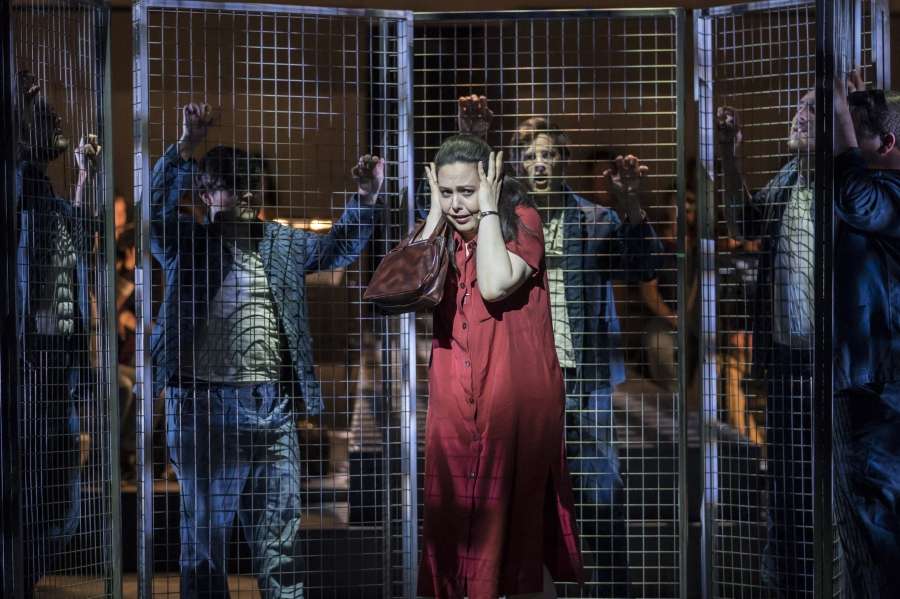 In recent years opera has started to pick its topics out of the newspapers, finding material in the everyday in a way Puccini would have approved. Now WNO has turned to Jake Heggie’s fact-based tale, premiered in 2000, of a nun going to meet a death-row prisoner who claims innocence. You’d expect the tale to follow the fight for acquittal. This time it’s different.

The action, directed by Martin Constantine, takes place downstage, with the orchestra upstage and the chorus behind them on a balcony. This doesn’t interfere with the tale, but it doesn’t obviously contribute to it either, except in the sense of laying bare the operatic process, perhaps. Set (by Misty Buckley) is minimal, with chairs, tables, and mesh panels for prison bars arriving and departing as required. The costumes (Sian Price) are of their time and place; the transience of fashion makes the production look like a costume drama.

An initial threat to the success of Dead Man Walking is that it will turn into a monodrama, with walk-on cameos for everyone but the central character Sister Helen Prejean, sung by Lucia Cervoni. (The opera is based on Prejean’s 1993 book of the same name, which was then made into a successful movie directed by Tim Robbins.) But Terrence McNally’s libretto gives us a decent range of characters and builds a genuine story.

In this particular production, Morgan Smith is so convincing a Joseph De Rocher (the man on death row) that he threatens to swamp everyone else. Menacing, frightened, cynical, dishonest, a growling baritone, he became the role in a way one rarely sees in lyric theatre.

This is not in any way to take away from Cervoni, who rarely leaves the stage and who has to manage some highly demanding arias in a role for which Superwoman might have auditioned. Anne Mason’s Mrs De Rocher is also a standout, grieving and reminiscing lyrically and sympathetically.

Andrew Henley is stuck with the character least likely to appeal to the audience, prison chaplain Father Grenville, and manages to seem both reasonable and unsympathetic, stuck in prejudice. By contrast, the characters audiences are most likely empathise with are surely the victims’ parents, Claire Watkins and Owen Webb (Mr and Mrs Hart), and Catherine Wood and Richard Roberts (Mr and Mrs Boucher). They were angry, grief-stricken and vengeful. Webb’s late declaration that his marriage has broken down, he no longer knows what he wants from the judicial process, and he would welcome the opportunity to pray with Cervoni’s Sister Helen is a moving and unexpected moment.

Indeed, religion is prominent. The first sung scene, after the unsung opening crime reconstruction, has Cervonia, Rowell and the children singing ‘He will gather us around’, which has the power here that ‘Simple gifts’ and ‘By and by’ do elsewhere. The concluding one has Cervoni singing an extract from Isaiah while others sing the Our Father in one of the evening’s several layered sextets and septets, and then Cervoni in a solo a cappella reprise of the hymn. There is much debate about God’s purposes, human wickedness and forgiveness, recalling Peter Grimes, another alienated anti-hero who kills a boy and then dies at the end.

Heggie’s score even seems to quote Britten at a couple of points. Echoes of Bernstein, Gershwin or, in the bass strings, Glass, weren’t a surprise, and the brass writing is all-American. But I hadn’t foreseen this perhaps unintentional cross-wind from the Suffolk coast. As a whole, the sound triangulates itself somewhere between grand opera, musicals and film, with rich writing for a full orchestra, allowing the players under Karen Kamensek to have a good deal of rather intense fun.

OK, you’d be pushed to describe this as a fun night out for all the family: I definitely needed my orange juice and salty nuts in the interval. But an audience experienced in, say, Saving Private Ryan, A Little Night Music and Les Misérables would enjoy this as much as those coming from Beethoven and Janáček. Let’s hope WNO gives them the opportunity to do so with more performances in more places.