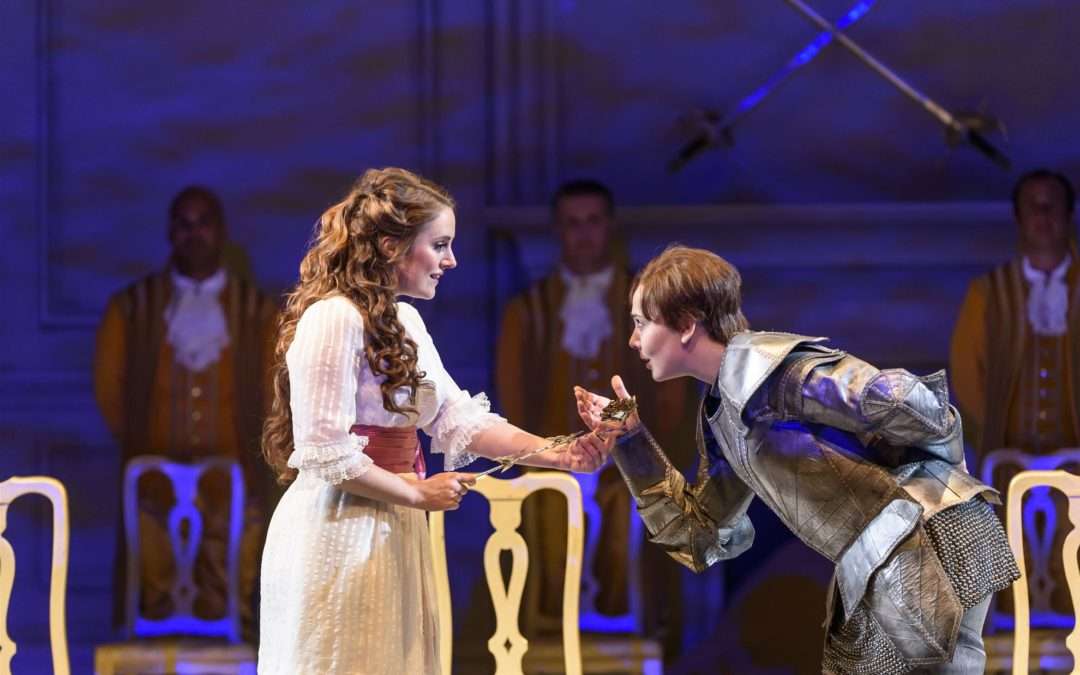 As is the fashion, Welsh National Opera’s Der Rosenkavalier opens with a dumb-show to accompany the overture. Unwilling to put their trust in Strauss’s overture, which is explicit enough to give YouTube and Facebook reasons for taking it down, director Olivia Fuchs has put Rebecca Evans’ Marschallin and Lucia Cervoni’s Octavian on stage and in bed for some live action. Not only this, we also had Margaret Baiton taking tea. Was she a maid waiting to be summoned by bell? No, it turned out to be the Marschallin in old age, remembering the end of her salad days. Baiton continues to haunt much of the action, palely loitering.

Dropping the 18th-century setting, this production takes place in 1911, the year of the first performances. A slide announces the date to help those members of the audience with an inadequate grasp of costume history. Another slide flashes up ‘1949’, which clearly gives us the date of the older Marschallin’s haunting. This is actually quite affecting: given a 1911 setting, Evan’s character might indeed live through two world wars and find her old-age in the Vienna of The Third Man. Come to that, Octavian is odds-on to die in the Brusilov Offensive; a slide over the entr’acte music before Act 3 suggests something of the sort.

A further feature of Niki Turner’s designs is sand. A slide with a quotation from Rilke’s Stimme eines jungen Bruders also overlays the overture, with the theme of time running through our fingers like sand. Act 1 accordingly takes place in something like the inside of an hourglass. Well, the poem’s from the right period, Rilke’s an appropriate writer to pick. Sand, time: well, yes. But what audience wants to see sand trickling down from the flies for an hour, and then have a sand dune as a design feature for the next two acts? It’s like a running gag that needs killing.

Musically, this was WNO at its finest. I’ve never heard the orchestra (conducted by Tomáš Hanus) play more richly and smoothly. The trio of sopranos – Evans and Louise Alder (Sophie) with mezzo Cervoni – pulled out all the stops: what a team. Evans disappears for much of the show, but still managed to dominate proceedings. Cervoni started good and got better in the trouser-role that turns into a frock-and-pinny one before re-breeching, if you see what I mean. Her scordatura ‘Mariandel’ went down a treat. Hofmannsthal’s libretto gave Strauss a cross-dressing, love-triangle plot which Moliere and Mozart would have felt at home with, not to mention Shakespeare.

Adrian Clarke’s upwardly mobile Faninal is measured and not overplayed. Brindley Sherratt’s Ochs, on the other hand, is wonderfully overplayed: half the audience cheered and half, knowing a panto villain when they saw one, booed. The noble but mendicant Anitra Blaxhall, Louise Ratcliffe and Helen Jarmany use their moment in Act 1’s levée to excellent effect. Peter Van Hulle’s (Valzacchi) yellow-press journalist is suitably vile; is his pierrot costume a reference to Oh! What a Lovely War? His side-kick Madeleine Shaw (Annina) is similarly venal: a red-boa, no-knickers performance if ever I heard one. They are also given some rumpy-pumpy to enact which didn’t really get us anywhere other than give audience members something to watch if they didn’t want to bother with the music.