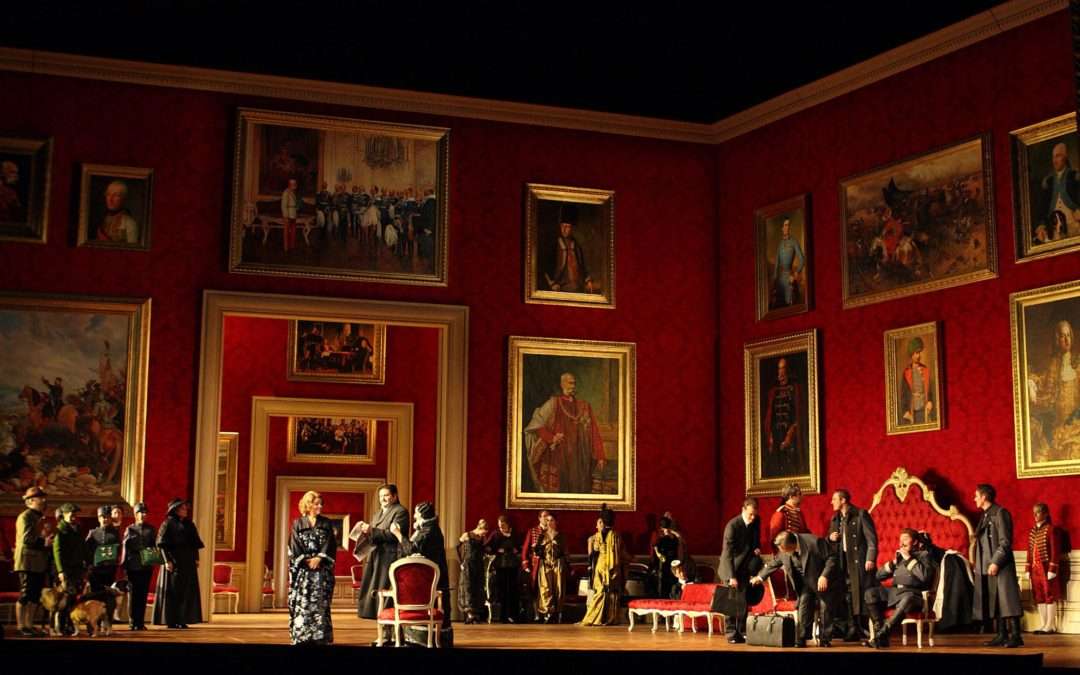 Your money or your love

After Elektra and Salome, critics and audiences must have felt they knew what to expect from Richard Strauss: ancient tales of tortured relationships and violence, set to rich, harmonically challenging scores. Drawing-room comedies with elements of farce must have been as widely predicted as Brexit.

True to its genre, Rosenkavalier plots a series of interlocking love triangles. The opera opens by sketching that of Octavian (Alice Coote), the Marschallin (Renee Fleming) and her field-marshal husband; the latter is away hunting in Carinthia, so he never actually makes it out of the Green Room.

The three-cornered relationship is echoed in a triangular set (designer Paul Steinberg). Doubling up the visual punning, the opera’s theme of disguise, deception and anagnorisis is embodied in a downstage wall which lifts to reveal the room behind it. The room is first the Marschallin’s bedroom, into which a crowd of visitors and servants crowd: a noblewoman brings on three orphans for some upper-class begging. There are hats and dogs for sale. The splendidly unpleasant Wolfgang Ablinger-Sperrhacke and Helene Schneiderman want to flog a subscription to a celebrity-gossip rag. Giorgio Berrugi is an Italian tenor in search of patronage; very convincingly done, lyrical as well as funny. The servant Mohammed is underused and gets lost in the Hogarthian melee. Robert Curtis is there to do the Marschallin’s hair: she studies the result and declares he has made her look like an old woman. Herein lie the seeds, if not of the plot, at least of the opera’s true subject.

So far the tension has been that her husband might return, forcing Octavian, like Cherubino before him, to hide under furniture. In fact, the invasive figure is Fleming’s cousin Baron Ochs (Matthew Rose): so is this going to be the triangle? It certainly looks so when Ochs makes a pass at Octavian, hastily disguised as chambermaid ‘Mariandel’.

No, in fact the second triangle is Octavian, Ochs and Sophie (Sophie Bevan). In the tellingly-named Ochs, Matthew Rose has the comic-older-guy role of the piece, and he sings and acts it for all it’s worth. But the plot depends on its third triangle, wherein two sopranos and a mezzo combine. Here, the older woman, the young girl and the teenage boy need to be balanced and distinct. In Coote, Fleming and Bevan, Covent Garden has certainly assembled a star set of leads, and each is wonderful in her own right. The problem is the blend: the voices are too similar.

That said, Bevan makes a very fine teenage girl growing up fast, and earns thanks for not overplaying the winsomeness card. Fleming is compulsive viewing as well as compulsive listening as the passionate yet measured older woman. Alice Coote as boy is good, avoiding the excessive strutting and thigh-slapping affected by ill-advised trouser-rolers. Her boy-pretending-to-be-a-girl is wonderfully observed, and she and director Robert Carsen deserve an especial congratulation for the care and wit that went into that aspect of the opera alone.

Like the Figaro operas, this is a tale of disguise, courtship, social class – and money. We are conscious in Rosenkavalier that things cost. Ochs is short of the readies and is hoping to marry money. Sophie’s recently-ennobled industrialist father (excellently sung and acted by Jochen Schmeckenbecher) is used to buying what he needs and is hoping to buy a titled son-in-law. Ochs is the applicant for this post, but muffs the job interview with Sophie, who is having none of it. Octavian then sets Ochs up with a date with ‘Mariandel’ – a new triangle is under construction. The place of assignation in this production is a brothel run by a cross-dressing Alasdair Elliott, who seems to have been borrowed from La cage aux folles. Again a downstage wall lifts to reveal a set that parodies the Marshallin’s bedroom. This all works well visually and conceptually; the trouble is, we lose our grip on verisimilitude. Ochs might meet up with a flighty maid at an inn and be interrupted there by his cousin, but could any of this happen at a brothel, the dignified Marshallin surrounded by fluttering sex-workers en déshabille?

After a slightly fumbled opening, the orchestra under Andris Nelsons managed the throbbing and gasping of the overture excellently. Indeed, it was a good night all round for the orchestra, with lovely solos. Nelsons managed to capture not just the Wagnerian drama of the music but also its Mozartian grace. There was also a clear memory of Mahler, particularly in the winds where Strauss reminds us that the traditions of the nobility are war and hunting, with a hint that the men pursuing women, nobility pursuing money and bourgeois titles are all the continuation of hunting and war by other means, as Clausewitz so very nearly said.