An engineer’s love affair with art 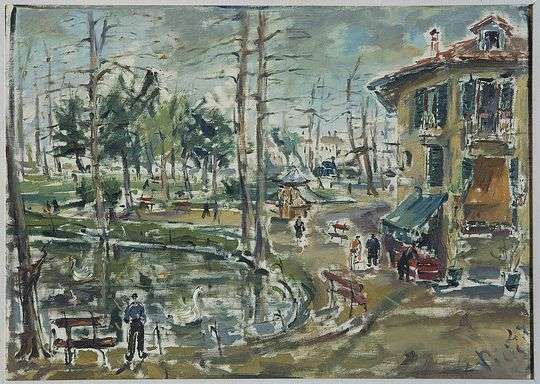 How a Genoese collector supported anti-regime artists in Fascist Italy.

Not that many people are familiar with the small treasure-house of 20th century Italian art in London, the Estorick Collection. A five minute walk from Islington’s Highbury Corner, it has grown to occupy a unique position in London’s cultural scene. Its off-the beaten track location and the intimacy of its spaces make it special.

But it’s not only the place, and the stately house with its walled garden that is so attractive. It’s the chance to see inspirational and sometimes controversial aspects of Italian culture.

The Estorick’s current offering is drawn from a huge collection assembled by Alberto della Raggione, who was a naval engineer in Genoa. Raggione developed an enormous passion for art as a young man.  Initially he purchased 19th century art works but then sold his early holdings and moved on to Modernist and Futurist Italian art. By 1938, his collection comprised around 350 works, becoming one of the most significant of its day.

Raggione now moved beyond buying established artists to active financial and moral support for younger and lesser-known personalities, some of whom had come into conflict with the Fascist dictatorship.

A new tendency began to emerge in Italian art, the Corrente (The Current), bringing together painters, sculptors, critics, poets and philosophers. It distanced itself from the Novecento movement, which despite various frictions, had been sponsored by Mussolini and his mistress on the one side, and abstract art on the other. In June 1940, Corrente’s journal was banned by the authorities. Della Raggione came to the rescue.

Private collections naturally reflect the eye and intentions of the collector and so it is with Alberto Della Raggione’s taste.  The Estorick’s director Roberta Cremoncini refers to Bruce Chatwin’s story of Kaspar Utz in her reflection* on the relationship between the art collector and the art work.

Certainly in the Estorick’s intimate ground floor galleries, we can appreciate the “mysterious chemistry” that motivated Della Raggione.

Giorgio de Chirico, whose enigmatic Mysterious Baths transforms the humble beach hut into an elegant classical temple, has become a household name.  The unsettling attraction of his surrealist geometries and lonely piazzas, arches and steam-trains is part of the collective psyche. Giorgio Morandi’s haunting bottles are well-known to lovers of metaphysical still-lives.

The evolution of Futurists like Gino Severini, Fortunato Depero and Enrico Prampolini is a little known phenomenon. Not to mention painters like Renato Guttuso and Filippo de Pisis. Severini’s Window with Pigeons, delicately drawn in tempera on paper, is a delicate and hugely desirable play of light and shade – his personal take on Paris.

The last Guttuso exhibition in London was held 15 years ago at the Whitechapel Art Gallery. His iconic Conversazione belongs to the Tate gallery but is rarely on view. And who, at least in the UK, has heard of painters such as Filippo de Pisis, Ottone Rosai and Mario Mafai? And yet, in a modest but penetrating way, this thoughtful selection goes under the skin. These artists eschewed the bombastic rhetoric endorsed by the Fascist regime to make works of intensity and vision.

The three canvases by the eccentric de Pisis combine a quirky delight for the pleasures of life and a poignant view of the world which make you hungry to see more. Mushrooms by the Sea (1931) – is a humorous oxymoron – its scratchy sky looming above the thick, earthy forms below. Nervous energy moves through his landscapes and still-lives, the light jottings drawn from life orchestrated into a flurry of movement.

At the other end of the spectrum, the style and feeling of Renato Guttuso’s Scantily Dressed Women reveal his friendship with Picasso. The central figure, clearly a lady of the night, has a vulnerable look which contrasts with the come-hither pose of her partner. Guttuso’s Ashtray at first looks like a realist depiction of cigarette butts, but the drifting smoke morphs into a semi-cubist nude, whilst the dark blue emptiness beyond the table once again seems to take us into a metaphysical realm. In the upstairs galleries, the Estorick’s own Guttusos, Death of a Working Class Hero and Lovers by a Wall take the story further.

Della Raggione left his entire collection to the City of Florence before he died in 1973, where he hoped that it would be seen by the widest possible public.  It arrived in the city where it was inaugurated in 1970 in the Palazzo Vecchio, where he said: “I give you my life”.

Thanks to the current restoration project of the collection’s present home in Florence, the Forte del Belvedere, this personal view of Italian 20th century art can be appreciated here in London.

From Morandi to Guttuso – masterpieces from the Alberto Della Raggione Collection, runs until 3 April at the Estorick Collection .