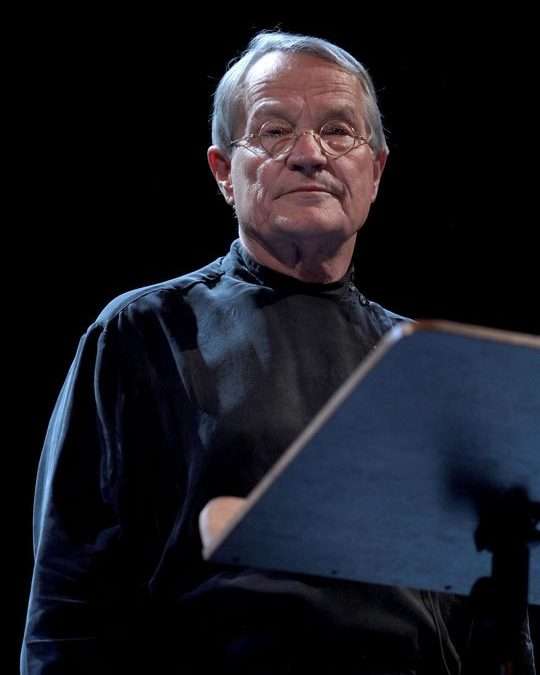 Several Scottish and English members of the Critics’ Circle gathered in St Petersburg last week (despite the best efforts of the Russian visa department) to celebrate the European Theatre Prize. Not just one prize but several since although the main award was given, not before time, to Peter Stein, there was also a special prize for Yuri Lyubimov, plus Theatrical Reality prizes (whatever that means) to the following: Viliam Dočolomansky (Slovak – Czech Republic); Kristian Smeds (Finland); Vesturport Theatre (Iceland); Teatro Meridional (Portugal); Katie Mitchell (UK) and Andrey Moguchiy (Russia). Sadly, Katie Mitchell was the only person whose work was unrepresented at the conference due to the lack of transportability of her productions but Kate Bassett, Dominic Cavendish and Jeremy Kingston all eloquently contributed to a seminar that also included Martin Crimp and Stephen Dillane and Katie herself turned up on the final day.

Of the events I saw, a packed house, largely made up of St Petersburg drama students, gathered to hear Yuri Lyubimov talk about his work with the occasional tribute from local academics. While the latter seemed incapable of pinning down the characteristics of Lyubimov’s work (or maybe the English translation was at fault), the man himself gave a trenchant account of his career. Astonishingly, Lyubimov, who is still working, was born in 1917, the year of the Russian Revolution. He was often at odds with the authorities while running the Taganka Theatre and left Russia for Europe in 1984 when he was stripped of his Soviet citizenship, returning to the Taganka in 1989. He was at pains to dismiss any romantic notions that the students might have that art thrived under persecution. He also interestingly was at variance with perceived ideas of the difference between British and Soviet actors, stating that British actors were happy to try anything out and would only ask questions later while the Russian actors started questioning before they had even read the script. He also stated that he had no plans to direct another Hamlet since there would never be another actor to match Vladimir Vysotsky.

The Finnish director Kristian Smeds presented an adaptation of Paul Auster’s Mr Vertigo, which was remarkable for the audacity of the staging and also for its bizarre view of America. Although often hard to relate the information given in the synopsis with the events shown on stage, one’s attention was riveted by a production which placed the audience on the revolve on stage. As we rotated, we could see scenes performed in different parts of the stage. We could also keep up with the characters as they ran round the circle as Walt is taught how to levitate by a cruel and demanding Master. For most of the time the stage iron was lowered but every so often it was raised and it was possible to see into the strikingly lit auditorium, which at one point showed inflated animals lumbering along the stalls and at another Walt floating above the seats.

The work of Vesturport is very familiar to London audiences and the seminar on the company was chaired by Michael Billington, while Kate Bassett and I provided a critical perspective alongside an Icelandic critic (who seemed not to have too high an opinion of Vesturport’s work), a German impresario, the artistic director of the Rekjavik City Theatre and Jonathan Pryce and Kate Fahy who have admired and befriended the company ever since they first visited London with ‘Romeo and Juliet’. The company members also provided an entertaining account of how they started and developed their unique style that combines classic texts with acrobatics. For those who were unfamiliar with Vesturport’s work there were also one off performances of Metamorphosis, which started life at the Lyric Theatre Hammersmith and Faust (much improved since it was seen at the Barbican).

Finally, the Maly Theatre staged a special performance of Lev Dodin’s production of Three Sisters, which managed to surprise a full house of European critics when Solyony seized Irina for a kiss, thus providing more of a motive than usual for the later duel, and Olga and Masha’s husband were also seen rolling on the floor together. Opinion was divided about the production but the acting was outstanding. The front of the Prozorov house gradually moved forward throughout the evening, reducing the acting space as the sisters’ futures grew more and more limited. The actors occasionally struck poses in the windows especially if they were being spoken about, but then were far more intimate and naturalistic when they sat on the steps at the front. Given that Dodin was working in his own theatre, it was curious that so much of the action took place right at the front of the stage where it could be barely seen by large parts of the stalls suggesting a degree of arrogance on the part of the director.

So much drama to be seen on stage but perhaps the most dramatic moment was at a late night party hosted by Vesturport in a bar called Liverpool owned by an Icelandic ex-patriot and situated in St Petersburg. A lively evening fuelled by Icelandic vodka on the house became rather too eventful when one of the more elderly partygoers flung himself the length of a table sending glasses, bottles and plates flying! Not, I should say, a member of this Critics’ Circle.