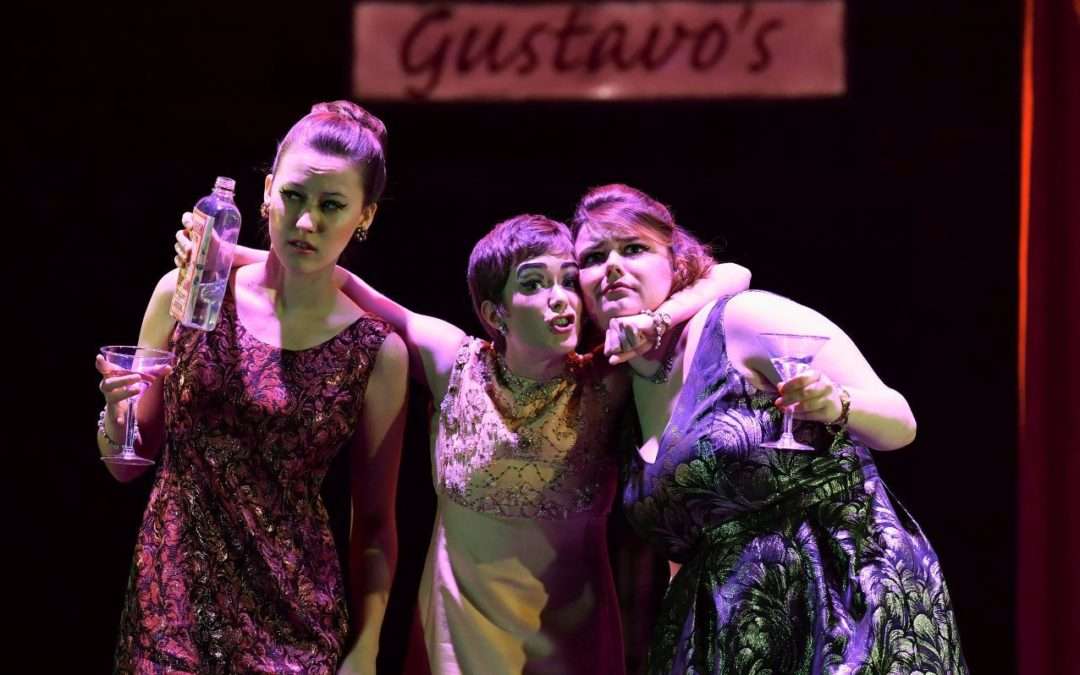 Harriet Eyley as Clotilde (centre) 'summed up the confusions all around as she delivered a despairing monologue aria while swigging from a gin bottle.' (C) Chris Christodoulou

Much blood flows in the London Handel Festival’s gangland production of the composer’s 1737 opera. The show opens with a body oozing gore on the stage. It is the family’s heir: and the father, swearing vengeance in extravagant recitative, cuts himself and mixes his blood first with his son’s and then with each henchman in turn. Everyone now shares the same familial purpose: get Faramondo, the killer.

As it turns out, the son had been switched at birth and so his blood was not regal after all. That’s all right, then. Faramondo had murdered a nobody and, on the point of execution, is spared. Yet bloodletting continues, in this production at least, and in a comic conclusion highlighting the absurdities of the plot, members of the cost drop dead from stab wounds even as they perform the last neatly choreographed line-dance.

Director William Relton sets the opera in the 1960s, the era of family gangs such as the Krays. The villains dress in sharp suits, their opponents led by Faramondo in leather jackets. The weapon of choice is the flick-knife. The Italian language shifts the setting in the direction of the mafia, and the word vendetta peppers the libretto. The girls wear mini-skirts and muddy the waters because they attract boys from the wrong side and the entanglements become highly confused for much of the three-act length. The additional operatic gender-crossings of women playing men are hilariously illustrated in the second act when singers of various genders emerge from ladies and gents toilets in a seedy nightclub.

An alternating cast comprises students on the International Opera Course at the Royal College of Music. Faramondo is sung with power and brilliance by Swedish mezzo Ida Ränzlöv, who could hold her on the professional stage already. Her paramour Rosimonda is Beth Moxon, whose warm, emotional mezzo has yet to develop the keenest articulation over the melismatic runs. Counter-tenor Timothy Morgan as Gernando showed an acute sense of comic timing and impressive natural stage presence to back up his wide vocal range. Soprano Harriet Eyley as Clotilde sang with volume which belied her diminutive stature, and summed up the confusions all around as she delivered a despairing monologue aria while swigging from a gin bottle.

Laurence Cummings, directing the London Handel Orchestra, maintained a furious pace and illustrated some of the most gruesome recitatives with murky keyboard tone like a silent movie pianist. The evening shows that the London Handel Festival, which runs until 24 April, is in rude bloody health.