German refugees from the Nazi terror were so numerous in North London that the Finchley Road became ‘Finchleystrasse!’ to the bus conductors. This is the title of a moving exhibition at the German Embassy of paintings, etchings and graphics by some thirty hugely influential émigré artists.

Lucian Freud, who arrived from Berlin aged 11 in 1933, is among them. There is humour in the etched portrait of his lawyer, Lord Goodman in his Yellow Pyjamas 1987, and a touching intimacy in the pregnant nude Before the Fourth 2004, another etching. Freud’s friend Frank Auerbach arrived in London aged 8 a few years later without his parents who perished in the holocaust. Auerbach’s vigorous, heavily worked style is clear in his etching Michael 1990 of the art history teacher and refugee at the Camberwell School of Art, Michael Podro.

Several refugees became teachers to a conservative generation still wary of Expressionist techniques. The husband and wife team Julius Rosenbaum and Adele Reifenberg established a North London school which exhibited after the war as The Belsize Group. His Portrait of Charlotte 1945 is the loveliest image in the show, a female in the classical half-profile of a seated pope. His wife’s portrait of her own sister-in-law, smirking and with eyes askance, draws us into the exile stories of both. 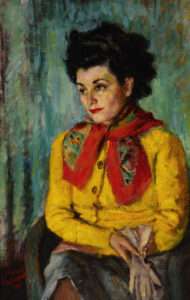 Rosenbaum’s Portrait of Charlotte 1945. The sitter Charlotte Melnikov was also an exiled painter living in London.

A second room is devoted mostly to the commercial art skills which the artists brought. Hans Schleger makes a pun on his own name in Hands at Your Service, his 1946 design for a London Transport poster. The press cartoonist Victor ‘Vicky’ Weisz shows the black wit he brought to the Evening Standard in Crisis? What crisis? 1961, a sketch of a Berlin café clientele oblivious to the wall going up around them. The stunning modernist 1926 advert for the pen company JLY Federn by Doerte Buergner, alias Dodo, shows what new imaginations Britain gained and Germany lost with the exodus.

The exhibition is a celebration of the positive influence of immigration on a culture. Curators Sarah MacDougall and Rachel Dickson present works here which were among the first examples of their technique to appear in this country. Most of the paintings come from the Ben Uri collection in London but for lack of space at the permanent gallery are rarely seen. Finchleystrasse also commemorates eighty years since Kristallnacht on 9 November 1938 when Nazi thugs and sympathisers, encouraged by the regime, smashed the windows of Jewish businesses and beat up the owners. The German Embassy welcomes visitors to the exhibition on two more occasions, Wednesday 6 June and Thursday 13 September. Tickets are free but must be booked in advance through the German Embassy website.