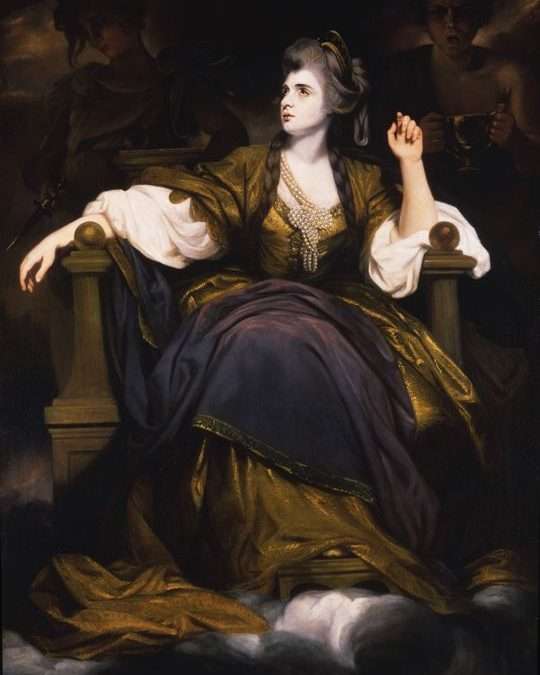 More than 50 portraits of actresses from the Restoration to the early 19th century take the stage in the National Portrait Gallery’s new show. Seen in flowing, fashionable dresses or in costumes they have performed in, these are the famous actresses as they wish to appear and give little hint of the lives or morals they experienced.

And then comes Nell Gwyn.

‘Pretty, witty Nell‘, as Pepys called her, appears in a draped chemise with a flounce frill that barely covers one breast, her hair cascading down with pearls entwined in it, and beside this portrait is a similar one also by Simon Verelst. Here she is the ‘indiscreetest and wildest creature that ever was in a court‘. Bare-breasted, showing all that God has given her, and one hand perhaps provocatively suggesting that she invite the King into her bed. By1680, when she was painted, she had abandoned the stage and was the mistress of Charles II by whom she had two children. But a later artist in the 19th century covered her décolletage in the second portrait and only when she was restored recently the beautiful Nell was again revealed in all her glory.

The other actresses were not so daring, nor were they seen so much in the theatre. They were painted in the studio but one exception is a wonderful gouache of The Three Witches from Macbeth by Daniel Gardner. Against a dark
background, it has Georgiana, Duchess of Devonshire bending over a steaming cauldron, adding herbs to it, while Elizabeth, Viscountess Melbourne and the sculptor Anne Seymour Damer look on, their swirling costumes adding to the scene. It is one of the few paintings showing actresses in a performance, albeit in this case they were society women.

The Three Witches by Daniel Gardner 1775

One of the most striking paintings is a head and shoulders of Mrs Robinson. Called ‘Perdita’, after the part she had played for the future George IV, she is seen here in a portrait by Hoppner, her face and neckline in a much freer style than an almost identical portrait by Reynolds at Waddesdon. But both have a red background, and her wig is partly covered by a huge hat with the longest white feather cascading from it.

Every important artist of the18th and early 19th century painted the famous actresses of the day. Reynolds magisterial view is of a sedate Sarah Siddons as The Tragic Muse while Lawrence’s equally well known portrait is of the statuesque actress giving a reading. There are paintings of Elizabeth Farren, Dorothy Jordan, Lavinia Fenton and Elizabrth Linley, and artists such as Lely, Hogarth, Romney, Gainsborough and Gillray have depicted the actresses. And there are some of dancers and of a fewcross-dressers. In all they explore the art and theatre of the 18th century and provide a vivid  study of their theatricality.

Complementing the main exhibition, which runs until 8 January, is a smaller display of paintings and drawings of modern actresses, plus there is a sculpture of Glenda Jackson. There are large portraits of Judi Dench and Fiona Shaw alongside photographs of Helena Bonham Carter, Vanessa Redgrave, Rosamund Pike and at least two dozen more. They are in an adjacent room and the display is free.