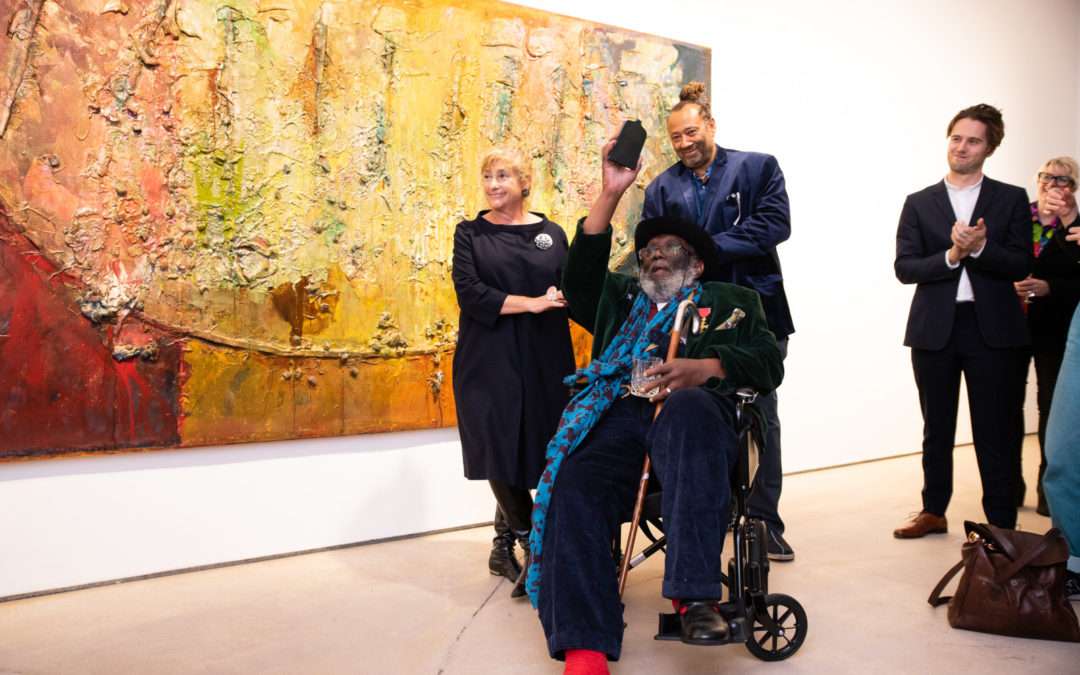 This year the Critics’ Circle Visual Arts and Architecture Section made two awards, both to individuals who might be said ‘not to have received due recognition earlier in their formidable careers.’ Both have made art in their own inimitable ways.

Frank Bowling, to be honoured next year with a long overdue retrospective at the Tate, is the winner of the annual Critics’ Circle Visual Arts and Architecture Award presented at Hales Gallery, Shoreditch on the evening of 1st November. The award, given by critics covering Fine Art, Photography, Design, Applied Art & Architecture, is in recognition of an outstanding contribution to the visual arts. This was the first time that the award has been given to a practising fine artist. Previous recipients in this category include Dame Julia Peyton-Jones, former Director of the Serpentine Gallery (2016), Adam Caruso & Peter St John of Caruso St John (2015), Sandy Nairne (2014), former Director of the National Portrait Gallery, designer Thomas Heatherwick (2013), architect David Chipperfield (2012) and Peter Murray, Director, Yorkshire Sculpture Park (2011).

“We are delighted to make this Award to Frank Bowling,” said Corinne Julius, Chair of the Circle’s Visual Arts & Architecture Section. “Frank Bowling has been something of an unsung hero (the title of our second award,) but now, after the good work of the Hales Gallery, he is finally recognised as a prophet in his own land. Born in Guyana, his ‘land’ also encompasses the USA and the UK. He has developed his own distinct style and way of working. He has, despite years of neglect, ploughed his own furrow.

“His rejection of identity politics, his refusal to be cast as ‘a black artist’ rather than as ‘an artist,’ has made his life more difficult, but that is in the nature of the man, who refuses to be pigeon-holed or conform to the perceptions of others,” says Julius.

Bowling’s elemental abstract paintings were long out of fashion, but he persisted in exploring both techniques and the nature of ‘stuff‘ alongside the use of colour in all its intensity. His work owes much to Constable and Turner, alongside Barnett Newman and Jackson Pollack. His wonderfully colourful, deeply textured and manipulated surfaces, show his delight in the making of an art work. He relishes exploring ‘stuff,’ with a constant investigation of materiality. He delights in the qualities of different materials, be they gels, liquids or broken glass perfume bottles, which he pours, sticks and staples in invigorating ways. At 84 he is still experimenting.

Frank Bowling said “This is the nicest thing that’s ever happened to me. There’s been this benign neglect and this accolade has lifted my spirits, especially as when the Critics’ Circle reached its’s decision, it didn’t know about the Tate Retrospective”.

The Visual Arts section has a policy of encouraging recent graduates and each year selects an appropriate maker of the Awards, with the recipients in mind. This year the Award was made by metalsmith Callum Partridge, who was taught by a pupil of the winner of our Unsung Hero Award made in memory of eminent critic, the late Denise Silvester-Carr. The Unsung Hero Awardwas made to metalsmith, thinker and teacher Michael Rowe, “who has,” says Julius, “been at the forefront of changing the perception and practice of craft into an art form, rather than just a manifestation of practical functionality.”