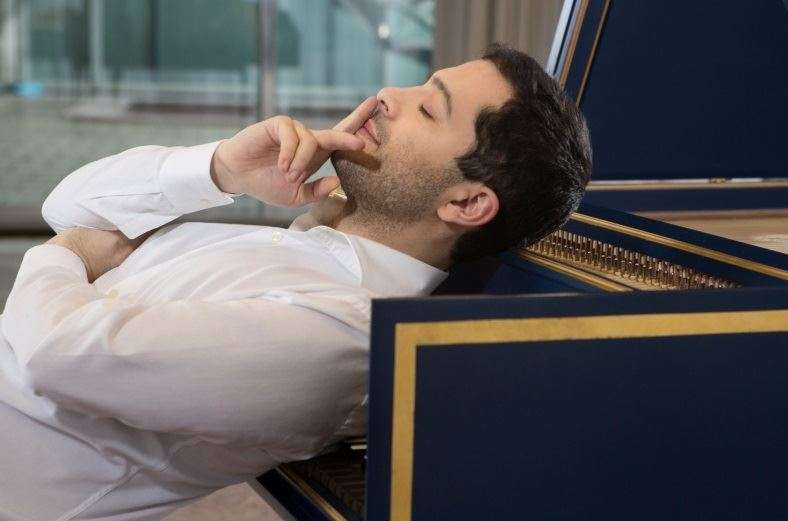 Mahan Esfahani with "an edgy, extrovert interpretation of the Goldbergs." (C) Bernard Musil/DG

It’s rare to see a sold-out house for a harpsichord recital, but with Mahan Esfahani it’s par for the course. The young Iranian-American musician’s firecracker flair has captured audience’s imaginations in a way that transcends preconceptions about the instrument. Anticipation ran high for his performance of Bach’s Goldberg Variations, especially since his recent recording has been gathering accolades galore.

Part of the joy of listening to Esfahani is that you cannot take anything for granted. The spontaneity in his style means nothing will sound the same twice. He never plays “safe”: for a start, he will take the risk of a momentary garble at high speed rather than downplay any virtuosity. More importantly, though, he can highlight elements of Bach’s compositional thinking in a way that makes perfect musical sense yet also jolts us out of our expectations.

For instance, on its first hearing he strips the theme back to its basics, only filling it out on the repeat with the passing notes and ornamentation we tend to take for granted. A near-improvisatory quality, built up through subtle gestures and continual flexibility, keeps the listener on the edge of the seat: perhaps a stylish and very personal unfurling of a flourish at a section’s end, or a moment to linger on the opening G minor chord of Variation 25 (the “black pearl”), pointing up the change of atmosphere.

Esfahani creates extra magic with the instrument’s registrations, playing with the possibilities as an expert lighting designer might change the ambience of a scene, and pouncing on the stops mid-variation like a deft-pawed feline. His instrument, a 2013 harpsichord made by Huw Saunders, copying a German two-manual one of 1710, was tough, resonant and projective enough to take any paces through which he might put it. Interesting to reflect that the natural resonances of a harpsichord can sound as if a piano’s sustaining pedal is being held down across several phrases at once – yet many pianists refuse to touch that pedal in Bach.

This was an edgy, extrovert interpretation of the Goldbergs, the emphasis on action rather than meditation. You can get the impression that Esfahani’s mind whirls along at such a pace that his fingers sometimes rush to keep up. If tranquility and reflection took a back seat, energy and passion brought a unique slant to the proceedings.

So did Esfahani’s “encore” – not music, but a brief speech in which he reflected on the need for an active rather than a passive approach to listening to music, and Bach especially. Use it or lose it: if we do not actively pursue the existence of this music, it could vanish. Nothing can “remain” unless we make it do so, he reminded us, with a double meaning that hit home. And Bach, he added, has enough secrets to keep us hunting all our lives. It won’t have pleased everyone that he chose to speak up, or even to speak at all. But this listener agreed with every word.