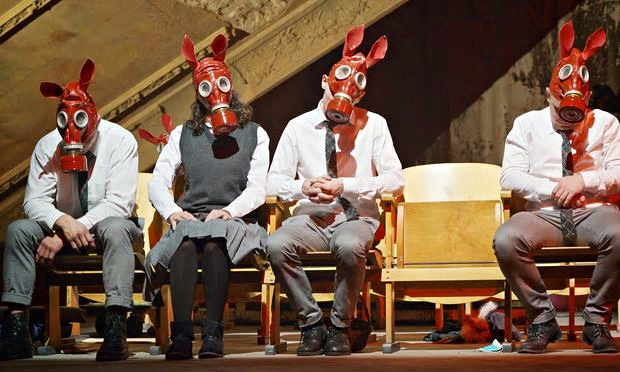 Yana Ross's production of Our Class, one of the plays performed at BITF © The Guardian

They said that Margaretta Sorenson from Sweden was re-elected president,and the delegates attended numerous events as well as performances on the BITEF prgramme. These included The Ridiculous Darkness by the Burgtheater, Vienna and Compassion:the History of the Machine Gun by the Schaubuhne, Berlin.

“The theme of the conferense was Newness and Global Theatre; Between Commodification and Artustic Necessity,” they added. “A number of people presented papers on this theme including Duska Radosavkjevic (Britain) who discussed her new book Theatre Criticism: Changing Landscape and Irina Gogoberidze (Georgia) who presnted a paper entitled ‘Novelty is Never a Global Negation. Theatre Never Waited for Godot.’

“The IATC’s biennial Thalia Prize in recognition of a special contribution to worlkd theatre was aearded to the leading NIgerian dramatist, novelist and thinker Femi Osofisan.”

The next IATC congress will be held in 2018 in Banff, Canada.