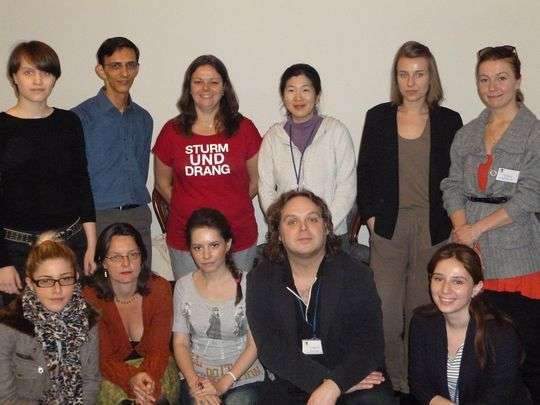 The Anglophone young critics' group in Warsaw: Britain's Mark Brown in the foreground and Fiona Mountford (sturm und drang t-shirt) in the back row

The congress re-elected the incumbent IATC president Yun-Cheol Kim of South Korea. Britain will continue to be represented on the IATC excom following the re-election of Mark Brown, who came equal second in a field of 11 candidates.

During the congress, the IATC biennial Thalia Prize for services to theatre criticism was awarded to the veteran Indian writer Kapila Vatsyayan. Ms Vatsayan is a noted authority on theatre and dance in India. The prize has previously been awarded to Eric Bentley (US, 2006) Jean-Pierre Sarrazac (France, 2008) and Richard Schechner (US, 2010).

The IATC’s young critics’ seminar programme (for professional critics aged 18-35) – which is led by director of seminars Jean Pierre Han (France) and adjunct director Mark Brown (Britain) – continues to grow, with the recent Anglophone groups in both Warsaw and the Latvian capital, Riga being over-subscribed. British participation in these seminars has increased in recent times, and young members of the Critics’ Circle Drama Section are encouraged to check the IATC website (www.aict-iatc.org) for news of forthcoming seminars; there will be a seminar in Maribor, Slovenia in October. Similarly, colleagues who know young, professional critics in Britain who are not yet members of the Critics’ Circle are encouraged to let those critics know about the IATC young critics’ seminar programme.

Finally, the sixth edition of the IATC’s successful webjournal Critical Stages (www.criticalstages.org) is due for publication in the near future. The biannual journal (which is published each summer and winter) enjoys a readership of more than 50,000 and boasts arguably the most international pool of writers of any theatre journal. Colleagues are encouraged to consider contributing to future editions; for contact information for section editors of Critical Stages, and all other IATC business, Critics’ Circle colleagues should contact Mark Brown: markbrown.teatro@gmail.com.