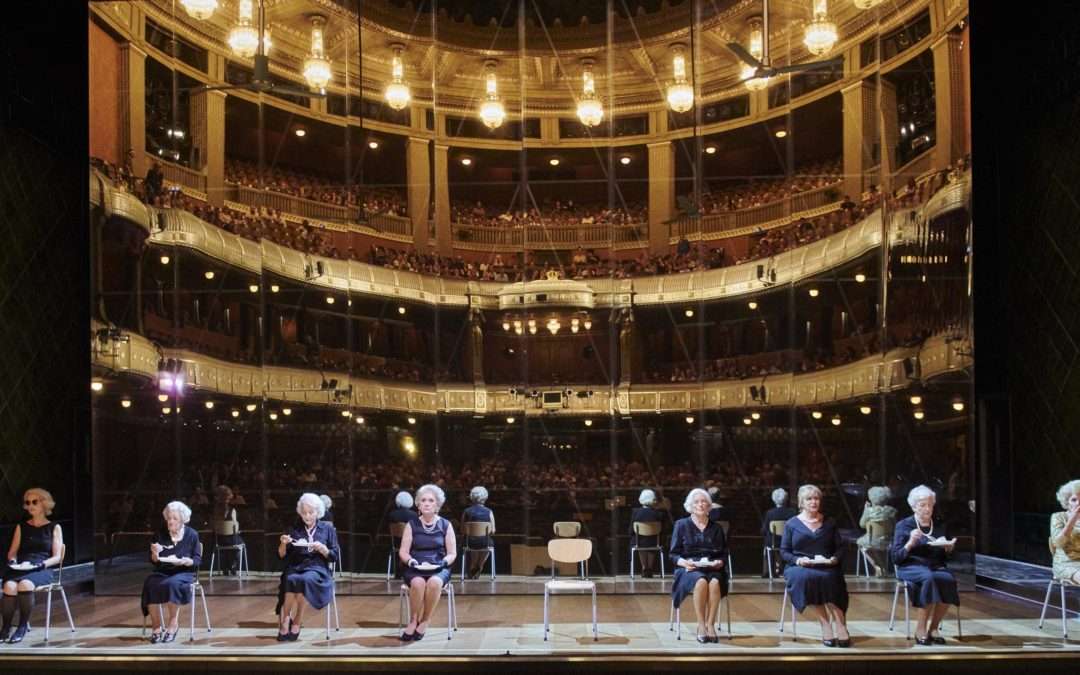 Opera in Britain can feel pretty peripheral, never more so than when you catch one of these classic productions that do the rounds of mainland Europe. It feels like conversation we are not part of – and, indeed, the idea that in some places opera might be thought a sensible way of conducting a conversation about society and politics would be a fairly outlandish notion here. (This is not a Brexit-bore point. That’s the way it’s always been: theatre and literature would be more appropriate media in Britain.)

The text is Gluck’s opera of 1779, dedicated to Marie Antoinette, a piece of self-consciously restrained classicism which hardly semaphores its qualities with wild abandon. You have to go looking for what makes Gluck extraordinary, and this is a production that digs deep, using metaphor to look for the opera’s secrets. That’s greatly helped by a musical performance that is respectful but intensely dramatic and thought-through. We know by now that Gluck doesn’t have to be played politely: it might look plain on the page but this need not be milk-and-water stuff. And this momentous story – the final expiation of the curse on the House of Atreus – surely requires forceful performance.

Krzysztof Warlikowski created this production in 2006 for the Paris Opera, where it created a genuine scandal and was accused of vandalism and disrespect – the usual complaints, of course. In days when we have become inured to Kosky, Herheim et al. it doesn’t seem half so startling, but it is still original and a great departure from the scenario envisaged by Gluck, though Warlikowski’s effort doesn’t so much replace the story as offer a parable of one aspect of the piece, while Gluck’s opera takes place simultaneously, without being eclipsed (as it might be in a Bieito production, for example).

The themes are memory, guilt, regret, prompted by Iphigenia’s dreams of murder and horror. Miraculously delivered from her sacrifice at Aulis many years before, she is now a priestess in Tauris and has no knowledge of the fates of her family: father Agamemnon, mother Clytemnestra, brother Orestes, sister Electra – though her dream is pretty accurate. Warlikowski creates a meditation on atonement, forgiveness, the curse of memory, raising questions without proffering glib answers, and it is (for quite a long time) an intense and hypnotic experience.

We find ourselves in a retirement home, whose dozen elderly-lady inmates pace, sit, dream, eat cake, drift in reverie, mourn. Among them, Iphigenia is most obviously tormented by the past, but the whole atmosphere is heavy with the sorrows of age. And this is where it works best: when Warlikowski tries, in the opera’s second half, to create over-literal links between the two worlds, things become too tricksy and the atmosphere drifts away. There is a lot of memory-flashback action behind screens upstage: a soapishly melodramatic wedding scene between Iphigenia and Achilles, neatly sketching the family’s tattered relationships, and Orestes’s killing of his mother, which raises spectres of other Greek myths with its heavy sexual implications. And Warlikowski (and his usual designer Małgorzata Szczęśniak) make pointed, maybe even sarcastically jokey, use of a mirror reflecting the ageing audience – a cliché now, but not so much in 2006.

Like I said, this would amount to nothing without a punch in the performance, and it certainly gets that from Stefano Montanari, who finds intense drama and detail in the score and whips up some marvellous sounds. The stately translucence of Gluck is there, the preponderant strings pierced with great pithy effect by Gluck’s sparing but pointed use of clarinet and oboe – and in the background a very beautiful fortepiano played by Dorothea Schwarz makes magical sounds. And the dramatic music of internal and external storms is played with a lot of power too. But it is the singing that turns this into a stunning evening. Amanda Majeski, so impressive as Katya Kabanova in London, turns it up even farther here, her singing so strong, without being remotely aggressive, the tone always sure, the sound chock full of emotion, her physical performance similarly forthright, possessed of an eerie stillness when it needs, but always full of pent-up energy. She’s some singer. In Jarrett Ott, another young American, Stuttgart have found another extremely vivid singer: his Orestes wears his wild torment with great sincerity, as does the fine Icelandic tenor Elmar Gilbertsson as Pylades.

And the “real” story feels immediate and urgent – not at all the re-enactment of an old myth. Nothing could be more moving than the moment Orestes thinks the Fates have abandoned their persecution of him. The music slows down to a series of suspended chords over a dominant pedal, full of a tingling hope and the dream of peace… but it’s an illusion, and the horrors return in full spate. It is Gluck’s amazingly adept handling of these alternating moods of serene calm and terrible strife that give the opera its power. The denouement, with Iphigenia and Orestes finally recognising each other at the very moment she prepares to sacrifice him, and the furious bars where Greeks invade Tauris, are pretty terrifying, but it’s what went before that lingers in the mind.