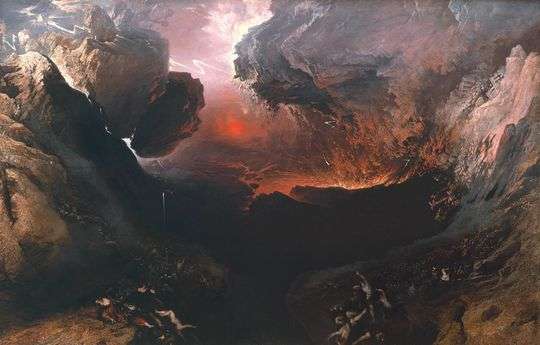 John Martin (1789-1854), the painter of large apocalyptic visions at the Tate Britain exhibition, was enormously popular in Victorian times. His work was purchased by the great and the good and by the public who took to his spectacular views of monumental grandeur and biblical scenes with great relish. If they could not afford the painting because they were so vast, they bought his mezzotints in large numbers and countless reproductions appeared in schools and church halls. But some critics were not sympathetic to his vision, especially John Ruskin who wrote that his paintings were an offence to good taste and “are merely a common manufacture, as much makeable to order as a tea-tray or a coal scuttle…”

His work eventually fell from favour and only in recent years has there been a surge of interest, particularly in the film industry where his paintings, notably The Last Judgement, The Deluge or The Fall of Babylon, have been an inspiration for many movies. Science fiction, video games and war also owe a debt to his images.

The Fall of Babylon 1819 © A Private Collection

Many of the painting are a fiery red with streaks of lighning and huge swirling bands of black water and dark rocks. They feature romantic building os the ancient world or vast palaces perched on mountains beneath thunderous skies. Others are lighter in colour, such as Adam and Eve Entertaining or the Angel Raphael which shows them in a glade of the garden of Eden with autumnal trees set against a twisting river with low white clouds, mountains and a brilliant blue sky. And then come the smaller more intimate works.

There are elongated watercolours of Richmond Park, one with a family walking towards what became known as “Martin’s Oak”, which has a circular seat at its base, the trees around it dipped in green with yellow. Another is a view of the Thames with trees and foliage in front of Pope’s villa and the river appears with swans andpeople in a pleasure boat: softer, gentle pictures, quite unlike hiscataclysmic views.  Martin, who was dubbed “mad”, in confusion with his brother who burnt down York Minister”, was preoccupied for about ten years withgreat civil engineering projects and his work decreased sharply from about 1828. He hoped to make his fortune and aspired to be taken seriously when his plan for supplying water to London was published and later when his scheme for connecting a circular railway around the centre of the city was seen.

Even more daring was his plan for diverting the sewage in London. The committee that examined his ideas thought they were pioneering, and after Joseph Bazalgette’s sewers were completed in the 1860s the popular press acknowledged that this scheme was only “What John Martin suggested forty years ago”.

After the death of two close relatives, when he considered himself “a ruined crushed man“, Martin was brought back from the brink by selling his plates for the Bible illustrations, and he returned to painting again, executing his three enormous biblical scenes, and exhibiting them to great acclaim in this country and in America. These, today, form part of a great tribute in Tate Britain to a remarkable man.