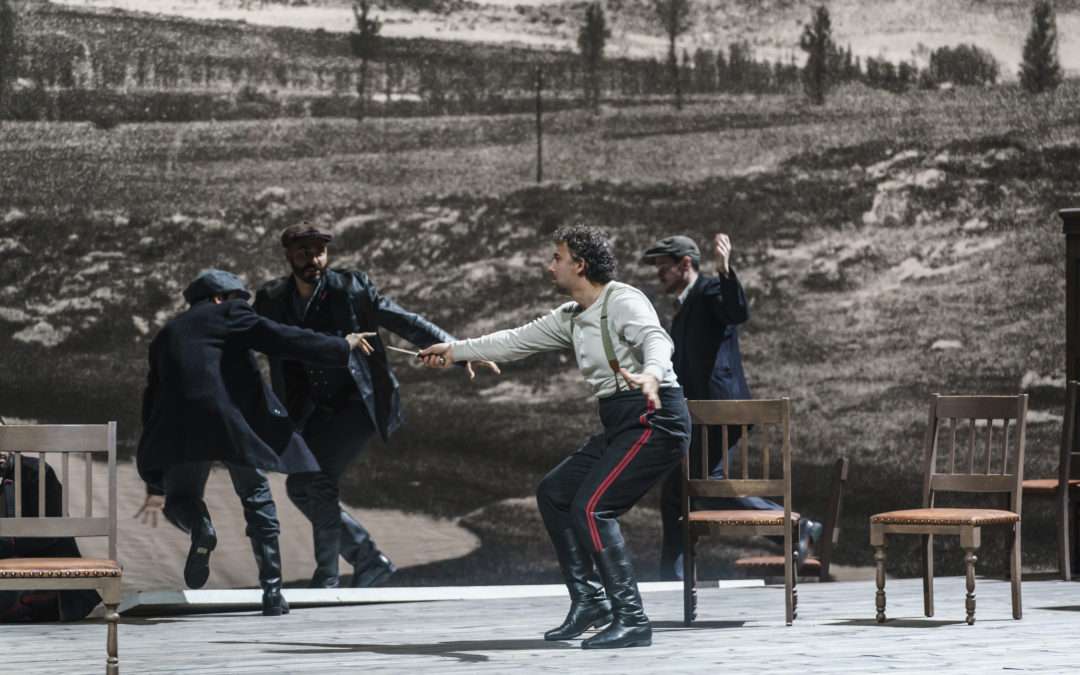 The Royal Opera has sold this production expensively and successfully not because of the work itself, however interesting (and it really is), but because of Anna Netrebko and Jonas Kaufmann as Leonora and Alvaro. Nobody likes Christof Loy’s muddled and ill-directed production, but nobody cares about that – including, I dare say, conductor Antonio Pappano.

Loy has indulged himself with meaningless nonsense during the overture and generally uses a large chorus and extras badly during the Preziosilla crowd scenes, which consequently fail to serve their purpose. He also wastes money on pointless, out-of-sync video close-ups which add nothing to the evocation of emotion in the main players. But Verdi’s music is so infectious, from the famous overture on, that in the last scene of this in many ways inferior and crabbed 1869 Milan version tears did fall down my cheeks. The story is deeply moving, as it reaches its relentlessly unsentimental conclusion: no way out.

So perhaps Netrebko, whose singing has colour, warmth, excitement – but whose musical personality almost entirely lacks the vulnerability so essential to her self-appointed victim role in this opera – is not entirely wrong for the part. It is disappointing that the programme article on the work and its London appearances does not mention the extraordinary Forza with which Sadler’s Wells Opera sealed the company’s 1968 move to the London Coliseum, with Pauline Tinsley’s delicate, vulnerable Leonora and Aussie sheep-farmer Don Smith as the out-of-line, racially dubious Inca descendant for which role Kaufmann’s slack acting is quite unsuited, however much people fancy his sterling and continuous glowing tenor.

The pain in this wonderful piece does not really come through most of the time in these principal characters here – though without doubt Netrebko gives her all, and in purely vocal terms sings some of her numbers sublimely. Vocally (and in terms of characterisation) the next best contribution is veteran Ferruccio Furlanetto’s Padre Guardiano, with power and depth and total engagement in the text he is delivering, even though Loy dresses him like some present-day Jesuit in a black suit, rather than alongside his brothers in monastic cassock and hood.

Ludovic Tézier as Leonora’s revenge-obsessed brother Carlo sings decently but fails to embody the managed horror and rage of what he has to be about – including delivering his sister to eternity. We all know which side Verdi is on, and of course the great composer’s own stubbornness is a big part of his understanding and liking for this impossible tale. Carlo Bosi is a more than decent Trabuco, and Alessandro Corbelli struggles to give value and reality to the comic tone of Melitone, without managing the essential sympathy. Veronica Simeoni does nothing much with Preziosilla’s chances, including being at a loss (which is really Loy’s fault) what to do with the rabble-rousing Rataplan number.

And I guess Loy should be slapped for permitting Roberta Alexander as Leonora’s servant Curra to sit down while her mistress is standing. But of course we are not being literal about period, are we? Great to see and hear Robert Lloyd still singing as the briefly visible father of vengeful brother and innocent sister.

It is very regrettable that the Royal Opera seems to have so few other British artists it feels it can trust, and has borrowed a mediocre staging from Dutch National Opera, rather than mounting a serious attempt at this wonderful, ungainly piece. Verdi’s original 1862 St Petersburg version was brought here by the Kirov and was done wonderfully by the Wells (with borrowed bits of scenery here and there). It has its flaws, I know. But Verdi’s first thoughts in this opera were never replaced satisfactorily for Milan. The management of the chorus episodes and the battle scene and duel in the 1862 version have a kind of energy that you do not find in the later revisions.

I find it a sad reflection on the Royal Opera’s currently privileged (and privately and publicly very well-funded) status that this not wonderful effort is perhaps the high point of this season, and is so gratefully received by the audience. It is not what it should be, nor is it given the panache and vision it deserves. Yet its strong elements, the very worthwhile star artists, are nourishing, even though simply not the answer.