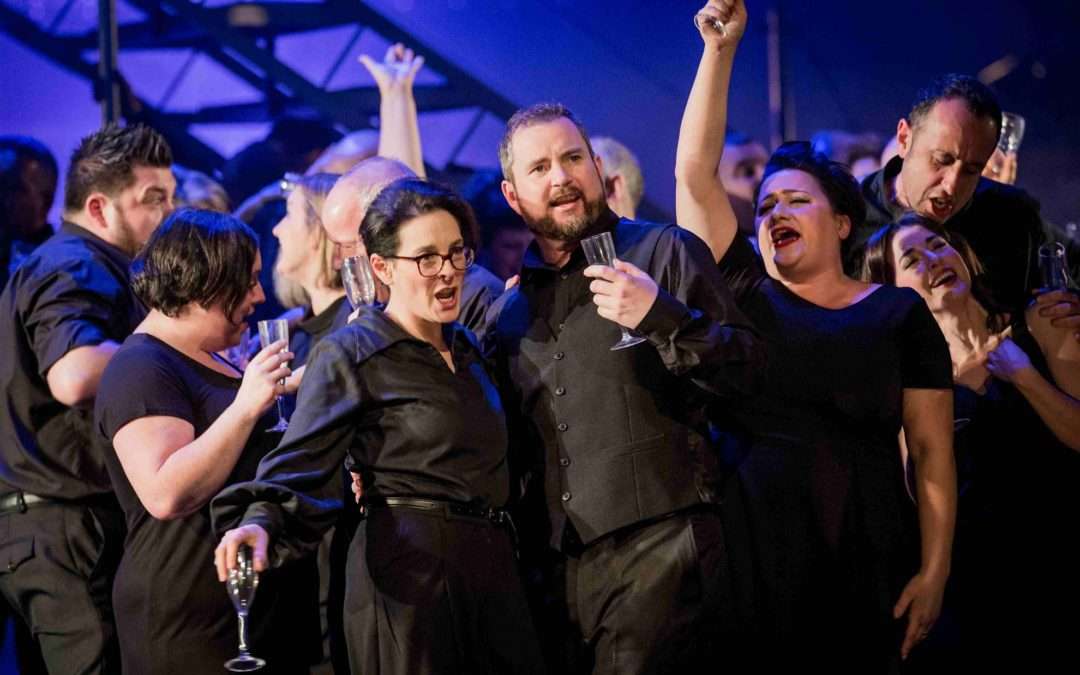 The chorus, whose "robust voices injected flesh and blood into the opera." (C) Robert Workman

Frank Martin’s Le Vin herbé, a “secular oratorio” based on the medieval legend of Tristan and Isolde, could not be further in scope and sensibility from Wagner’s opera. Written between 1938 and 1940, in a Switzerland oddly isolated from the war raging around, Le Vin herbé has the beautiful, archaic flavour of a Pre-Raphaelite painting. The opera it most recalls is Debussy’s Pelléas et Mélisande.

Written for eight instruments – two violins, two violas, two cellos, a double bass and piano – and 12 voices, Martin’s score is tonal but with shadings and slidings that make the listener constantly uneasy. From a recording, I had imagined a still, formal series of tableaux, the music exquisitely melancholy and the Greek chorus narrating and observing in a detached and emotionless way, with soloists stepping forward to deliver their inner monologues.

How then would director Polly Graham turn Martin’s strange and delicate oratorio into a piece of theatre big enough to fill an opera stage? Brilliantly, in my opinion. Graham and designer April Dalton didn’t clutter the stage with castles, forests or galleons; instead they left the space open to the back wall providing a canvas for Tim Mitchell’s dramatic lighting design. A walkway linked by ladders formed an arc over the onstage orchestra.

The music, energetically conducted by James Southall, was the organic heart of the production. A black-clad chorus (at least double the forces Martin required) swelled and flowed around the structure like waves on the Irish Sea. Their robust voices injected flesh and blood into the opera and chorus members made a fine impression in the supporting solo roles – particularly Gareth Dafydd Morris as Kaherdin, Howard Kirk as King Mark and Sian Meinir as Iseult of the White Hands.

The lovers emerged from the black crowd in virginal white – Caitlin Hulcup was a luminous presence as Iseult the Fair and her coppery mezzo twined deliciously with Tom Randle’s sympathetic tenor. Physically, too, they fell upon each other like sex-starved teenagers after drinking the potion, before a distraught Brangien (Rosie Hay) dragged them apart.

With movement choreographed by Jo Fong, the chorus provided emotional high points. I loved the way the women cradled the dead Tristan, tenderly laying him in a shroud and lighting candles around the grave. Most poignant of all was the flowering bramble that grew out of Tristan’s grave and across to Iseult’s, when the chorus became a human chain slowly bridging the gap between the dead lovers. It was simple but effective, like the rest of this rather special production by WNO’s young associate director – definitely worth catching on its UK tour.