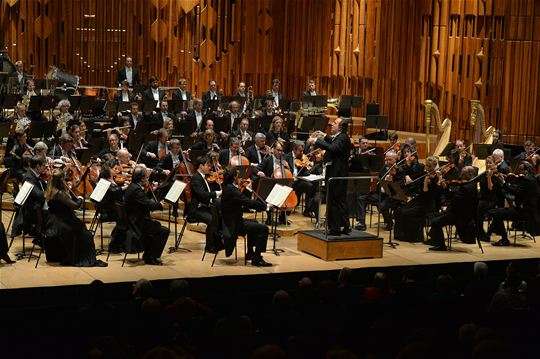 Beginning not just a work, but an entire residency on the half-beat is a risk, but the Leipzig Gewandhaus Orchestra arrived at the Barbican last night and picked up the bounce of Richard Strauss’ Don Juan as if they were already mid-concert. The lover was straight into his seduction at the meticulous goading of conductor Riccardo Chailly, who retires as Kapellmeister this season. Original chat-up phrases sparkled with glockenspiel kisses, the clarinet whispered intimate sweet nothings and the strings gleamed with a lustrous leer. The timpanist thudded ominously and there was a debt to pay in the lothario’s concupiscence. The golden horns were blemishless but the last staccato chord was not together.

Chailly chaperoned Portuguese pianist Maria Joao Pires to the Steinway for Mozart’s B flat Piano Concerto No27. With legato fingers she mimicked the strings of the introduction, which in turn echoed the wind.  A sense of reverence overtook the  concert’s core, with the orchestra reduced to a hand-picked few and Pires bowing her head at the keyboard as Mozart had bowed to Bach on his visit to the city. She played with crystal clarity the time-expanding larghetto, poeticising the dotted treble melody against the gently pummelling left hand chords. She took the jig at an easy allegro and none wanted it faster.

The Leipzigers’ suitcases are replete with Strauss tone poems for the week – Also Sprach Thursday, Till Eulenspiegel Friday. They finished last night’s opener with a dark but wry account of Ein Heldenleben. They showed their weight in the Wagnerian repeat-notes, and their acute perspective in the abrupt turn to the sneering flute episode. The flatulent twin tubas as ‘the critics’ opined with mock weariness in crude parallel fifths. The hero of Heldenleben is the solo fiddle, played yesterday by concertmaster Frank-Michael Erben with radiant, utterly captivating tone, a storyteller finding new meaning in an old tale, yet still the captain of a team which can nail as one the half-volley from Chailly’s opening sweep. Criticise that, they seemed to say