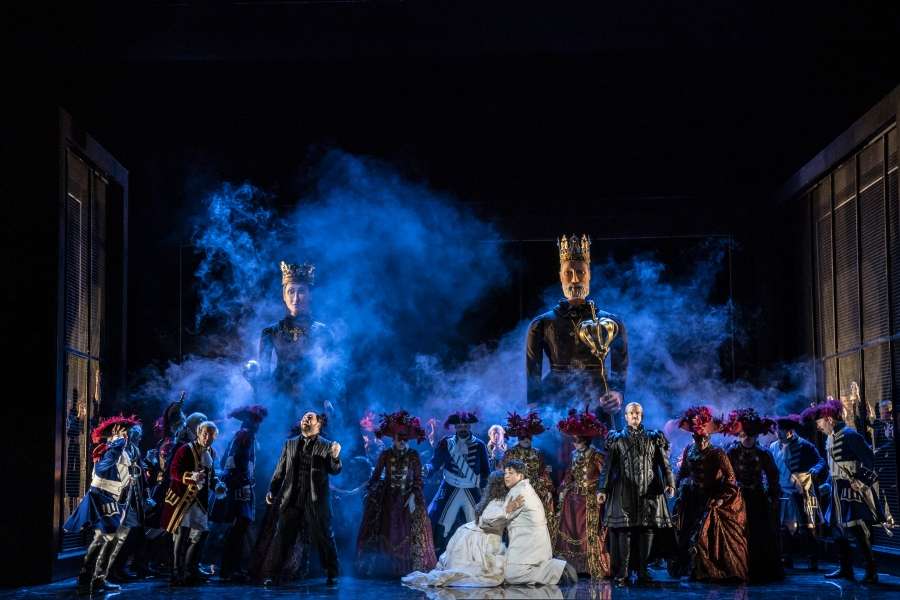 Welsh National Opera’s new (to the UK – it first saw the light of day last spring in Bonn) show is a visual triumph. The costumes (Marie-Jeanne Lecca) and set (Raimund Bauer) are arresting. The latter is a series of frames, so the characters seem to be stepping in and out of paintings; there are several freeze-frame silhouette moments to add to this effect. Glazed, they become prison walls after the interval. As they are wheeled into different configurations, the stage resembles an old-fashioned puppet theatre. A bit like in WNO’s Un ballo in Maschera last year, the secular powers are seated in high chairs like tennis umpires. There is an echo of this later when the wedding scene is dominated by vast folk-art figures of king and queen.

The costuming of the French recalls Napoleon’s invasion just a generation before Verdi’s time. The fact that Bonaparte’s nephew was ruling France from 1848 and keeping a careful eye on the rumblings of Italian unity also lurks in the background of the composition of this allegedly 13th-century romp. Henri (Jung Soo Yun) is in an open necked shirt and jacket, a bit like a modish television presenter. Guy de Montfort (son of Simon) is togged up in black and seems to have a dash of Philip II, while his spectacles recall Bacon’s Popes and inquisitors. The oppressed Sicilians are in opera-crowd standard-issue: dark jackets, trousers and a sprinkling of fedoras that contrast with the vibrant colours of the French military and nobility.

The lighting design (Fabrice Kebour) runs a good deal of the action in the shadows, with a backdrop of different blues and mauves, and the occasional outbreak of brilliant light. If you complained about the obscurity of BBC’s Wolf Hall, this show may irritate you. However, it’s a shadowy plot, with much muttering, whispering and plotting, so the lighting is easy to justify.

Another excellent aspect of David Pountney’s show is the use of dance (choreographer Caroline Finn). The National Dance Company Wales are first of all the wedding party, what elsewhere Touchstone dubs “country copulatives”. Their obligatory Romantic-opera dance of villagers turns nasty when the watching French (under the command of Gareth Brynmore John as Robert) decide to seize the women: this is rape as a weapon of war and NDCW does it well.

The first half of the evening ends with a long dance, enacting the seduction of Henri’s mother by De Montfort. This is not ballgowns: it is rape as a weapon of war again, a tale of seizure and occupation. The costumes give us a set of skeletal day-of-the-dead zombies, and the combination was dramatic, shocking, funny and creepy. The choreography thus acutely picks up on the character that Verdi’s music establishes right from the overture. This extended dumb-show section annoyed some of the audience sitting near me who left for the interval muttering darkly, fully in keeping with the onstage tale of bitter resentment.

By contrast, the end of the second half is a ludicrously bad massacre which was about as intense as the all-fall-down ending of Ring a Ring o’ Roses.

Hélène is the story’s one star, and Anush Hovhannisyan seizes the opportunities Verdi gives her with both hands. The audience loved her. Henri is a more difficult part to play, as he wobbles between Heldentenor declarations of intent, torch-song declarations of love, and moral-dilemma hand-wringing. Jung Soo Yun seems affected by all the uncertainty in the character and never really lets rip. Procida (Wojtek Gierlach) is unswervingly committed to the armed struggle. Gierlach sings it well, but given that Hélène and Henri are ultimately thrown under his political bus, and the ease with which Procida accepts collateral damage, I would have welcomed some additional menace. Giorgio Caoduro’s Guy de Montfort (son of Simon, but with no university named after him yet) is the menacing Scarpia-baritone of the tale. He has real stage presence and holds the audience well, though the voice doesn’t always cut through—forgiveably, since Verdi seems to want to him largely to growl. Singers’ accent and diction were not consistently clear, with the result that we couldn’t always be sure that this was a French libretto we were hearing.

The WNO orchestra under Carlo Rizzi took the music and ran with it energetically. Sometimes there was a lack of clarity, but that too is in the score, which is composition as stew—keep adding ingredients and it’s bound to be tasty in the end.