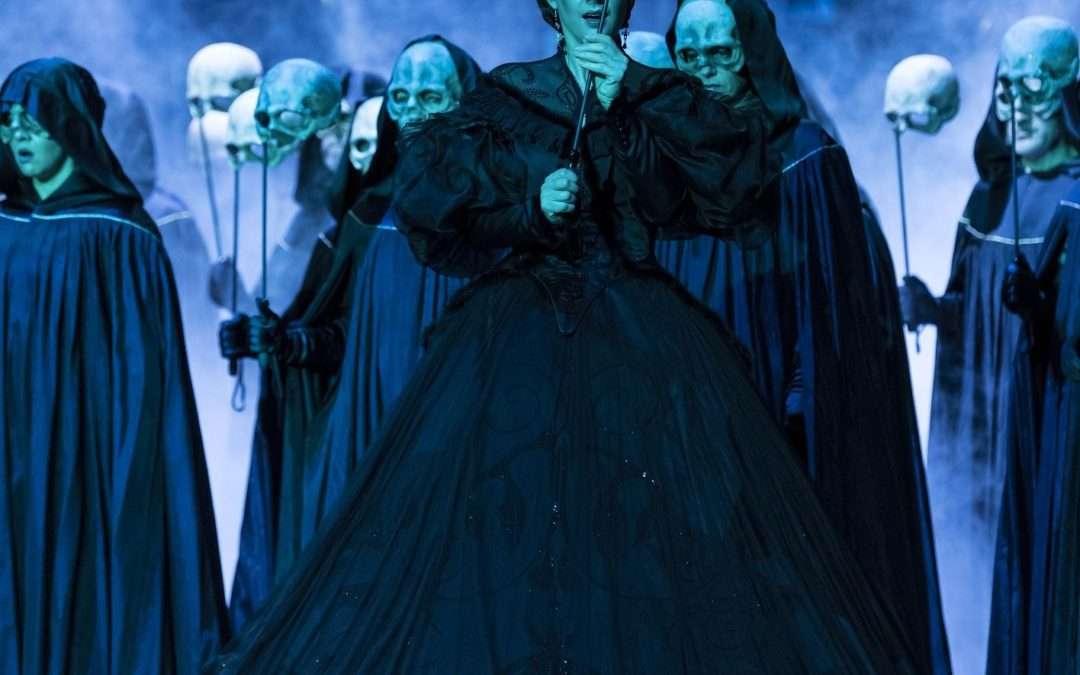 The first production by Stefan Herheim that I saw (and liked) was his Giulio Cesare in Oslo before the extravagant new opera house was built there. Herheim is Norwegian but his successful career as a director has been mainly in Germany, and he followed the German approach of studying Theaterwissenschaft (aka Theatre Studies) in Hamburg (with among others Götz Friedrich) rather than being apprenticed and learning on the job as an assistant – which he no doubt also did a bit of. Covent Garden’s revival of his 2013 Verdi production (commissioned for Paris and almost unknown in the UK) is a co-production with Copenhagen.

Herheim likes to introduce factors not strictly relevant to the story. Often he transposes the location of the work visibly to where it is being presented. But here with Vêpres (set in medieval Sicily) he presents it against an opera-house stage – representing the Paris Opera where it was premiered in 1855. So costumes, manners and appearances are Second Empire. There are also a lot of ballerinas on- and off-point (and never much to the point). And yes the Jockey Club of Paris liked looking at legs – though the dancers’ frocks cover rather than reveal like tutus.

It is quite hard during the first two of five acts (an adequate but undistinguished libretto job by Scribe and Duveyrier) to reckon Verdi aroused by the material. The text is a hand-me-down from a libretto for Le duc d’Albe already worked over and abandoned by Donizetti, the whole thing transferred from 16th-century Antwerp to Palermo in the days leading up to the 1282 uprising against French rule.

Things pick up as the second act wears on. The sets and Herheim’s general direction are elegant but dispassionate. The opera has little of the thrilling vitality Verdi applied to Traviata, Trovatore and Rigoletto, the knockout masterworks he had just completed. A certain Frenchified grandeur pleases from time to time. The story acquires and displays some passion as it wears on, thanks mainly to the committed singing and acting of wonderful Michael Volle in the role of Guy de Montfort, the only persuasive figure in the whole farrago – his role a bit of a trial run for Philip II in Verdi’s sublime Don Carlos (with far superior story and Schiller-based libretto). If only Bryan Hymel as the challenging tenor lead Henri was as good an actor and singer. Hymel has a terrific top and is a very able performer, but I did tire of the overused emotional catch in his voice – as if revealing distress in his singing makes the character more real. Henri is de Montfort’s illegitimate son, spawned by a rape when the French, led by Montfort, took over Sicily. Hymel makes Henri too flaky to engage the sympathy.

Also in leading roles, Erwin Schrott as the rebel Procida does what he can with rather unrewarding material, and Malin Byström as Henri’s aristocratic beloved Hélène cuts a sympathetic figure and delivers her not especially memorable numbers well. Conductor Maurizio Bellini provides a suitably stylish impulse. But considering this opera failed to achieve recognition with the advocacy of John Dexter’s striking staging in Hamburg in 1969 and at the Met in 1974, one has to conclude that its problems stem from Verdi’s struggle with laboursome material. The composer’s genius is so striking that where it is wanting the performers are unlikely to be able to compensate. And Herheim, a director with ideas and real skill, was clearly never excited by what he found.