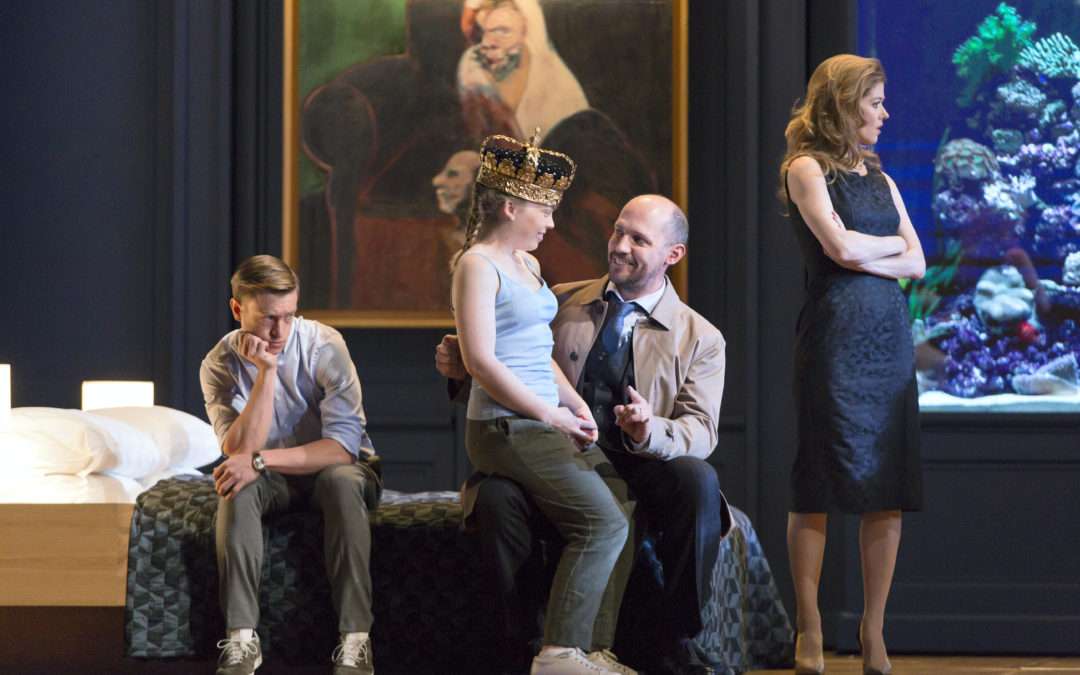 Two operas about Edward II, his relationship with Piers Gaveston, and his bizarre death, is two too many. Yet another British monarch with marriage problems – whose son was much more important and interesting than he was – is surely just for historians, were he not an icon of supposed gay persecution.

Is George Benjamin’s recent effort at the Royal Opera any better than Andrea Lorenzo Scartazzini’s was at the Deutsche Oper, Berlin a few months back? Both suffered (but somewhat differently) from lyrical deficiency. Opera is a confessional artform in which personal revelation comes through song, and melody plays a crucial role in some way or other. George Benjamin’s music has subtlety, colour and expressiveness – but can he successfully characterise in song or convey a sense of location and event through his music? Though his previous full-length opera, Written on Skin, has travelled, and Lessons in Love and Violence is booked to go to Amsterdam, Hamburg, Lyons, Chicago, Barcelona and Madrid, I found it unpersuasive and unengaging as theatre. Scartazzini managed to make Mortimer and Edward (and other characters) seem a bit more real, though Benjamin is more inventive and skillful in the music he puts together, more descriptive in traditional serious music terms.

The problem with Written on Skin was in the raging emotions one expected to find in the story about illicit lovers and jealousy, which neither Martin Crimp’s libretto nor Benjamin’s music actually endowed with much credible vitality. The experience feels operatic and artful with its counter-tenor angels adding a supposedly spiritual level that never quite gels with the implicit but stubbornly pallid emotions, and the same is true of Lessons. In  music and theatre one recognises violence and its signals, though no moment in either of these Benjamin works, or the Scartazzini, catches one’s attention as (for instance) Iago’s ‘Credo in un dio crudel’ makes the hair stand up on the back of one’s neck. But the terms of operatic trade demand that one should really feel something when the characters sing about their emotions – which is why the discretion of the text and its lyrical potential in a would-be opera must play such an important part in the structure and musical development. I have no impression that Crimp understands this, or that Benjamin knows how to demand it from his wordsmith – or would actually be able to exploit the opportunity, were it to be there.

Even supposing these characters – Isabel, Mortimer, Gaveston and Edward – all really understand what’s going on, like the participants in some contemporary true-to-life drama, there is no indication of that in the opera, which is an intellectual rather than an emotional exercise, entirely lacking the sort of vitality that distinguishes (for instance) Gerald Barry’s operas.

Benjamin undoubtedly has a sense that there is something genuinely operatic in the material he has used for his two full-length operas. He really tries with all his civilised musical giftedness. But he has not – despite these works’ success with audiences – managed genuinely to identify what that might be.

Opera is something you feel in your bones and in the pit of your stomach. It is not literary or intellectual. It is utterly compelling, never an exercise. It is true that Edward III executed his mother’s lover Mortimer when he seized power. But the opera proceeds blithely as if aristocrats like Isabel and Edward II had anything whatsoever to do with the upbringing of their children. So the young future king is standing around with his sister while his father is grossly and indiscreetly misbehaving with Gaveston. I find it improbable that even in a willing ménage à trois today that would happen. I guess it is because neither Crimp nor Benjamin can genuinely evoke what is potentially at the heart of this story – or know that they need to enable us in the audience to believe the reality of those like Mortimer who are disgusted by homosexual attraction as well as those who experience it – that they have sought refuge in various intellectual devices. Not perhaps the simplest task, and they would run the gauntlet of being deemed politically incorrect today. Nevertheless, the result has been not believable nor even very interesting.

Of course, the production by loved-or-loathed Katie Mitchell has a certain style, and some of the principal performers are experienced and capable, such as Peter Hoare’s quite effective Mortimer. But Barbara Hannigan makes surprisingly little impression as Isabel, while both Stéphane Degout’s King and Gyula Orendt’s Gaveston (and Stranger) seem passive non-entities however much significant (and sometimes almost striking) matter they are given to sing. The boy (Edward III – though no historical names are used) is the most memorable performer in the opera and a real achievement by Samuel Boden. Benjamin conducts his own compositional efforts dutifully. But Crimp and Benjamin’s operatic baby feels still-born.