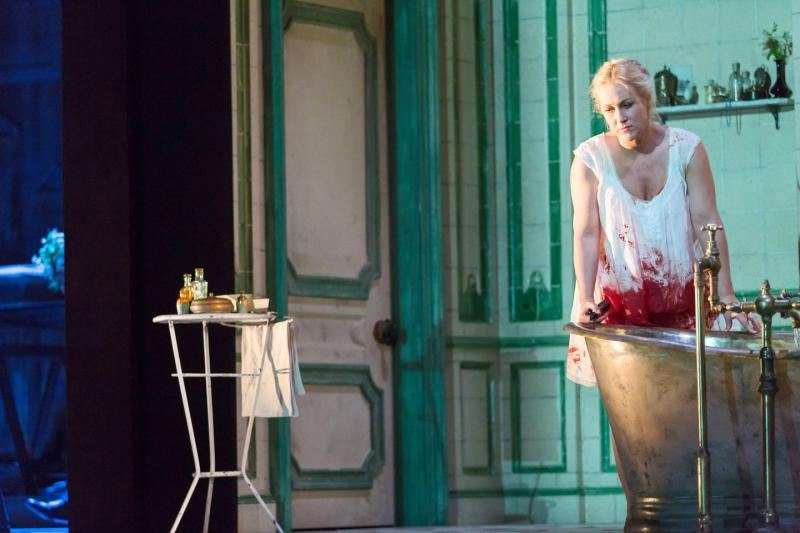 The image of Lucia coming on stage, mad, covered in blood, singing like an angel, is one of the of most famous scenes in the whole operatic rep. This definitive mad-scene (accompanied memorably by a glass harmonica) embodies the results of too much pressure within the family in a way Hilaire Belloc 80 years later might have made comic – as indeed Katie Mitchell, in her new Royal Opera production of Donizetti’s best and most involving opera, also managed to make the murder (which she chose to put onstage) that leads up to it.

​Throughout her production Mitchell shows us two rooms next to each other – adding in a significant way to what composer and librettist created. For example, while Mitchell insists on showing us on half the stage the stressful murder of the husband Lucia has been forced to marry (involving many recoveries by him, received with hilarity by the audience), on the other half we get the scenes from the original scenario where Enrico goads Lucia’s beloved Edgardo into fighting a duel next morning, followed by the scene where the chorus of celebrating wedding guests are appalled to see Lucia appear covered in blood.

Taking a fresh look, Ms Mitchell discovered all sorts of things that might have been (but weren’t) in the original. Her discoveries had consequences. Inevitably we have the wrong atmosphere for the famous entrance, Lucia having just utterly upstaged herself. Mitchell also decided Lucia is pregnant by Edgardo, and that the stress of the murder makes her miscarry. We see Lucia sitting on a Thomas Crapper loo while aborting, and ultimately Lucia in her bathroom taking poison and dying in a cast iron bath. While Lucia sings her mad scene, Mitchell and her designer Vicki Mortimer adorn her with foetal matter attached to her underclothes.

But these staged footnotes as extra scenes have nothing to do with the actual music of the moment. Ms Mitchell may have thought she is focusing afresh and making things clear. In fact she is in effect daubing a moustache on the Mona Lisa. The production is dysfunctional.

Mortimer dresses the production in 1830s clothes (the men in uniform top hats and suits, the women in crinolines and period hairstyles). But despite this gesture towards authenticity, what is shown in Mitchell’s split-screen staging scheme destroys the subtle characterisation Donizetti and librettist Cammarano achieve through text and music. Sometimes the two rooms are next door to each other in “reality” as it were, but sometimes not. Mitchell presents the story neither in the 1830s when the opera was composed nor in the 1690s when it happened but in the morality of today.

Edgardo and Lucia have sex while duetting in the family tomb – she rocking backwards and forwards on top of him to match the swing of the music they are singing. Later, after she and Alisa have finally killed Arturo (murder being not as easy as you may think), servants come in and clean up. These Lammermoor aristos will not be subject to police enquiries. They are a horrid family lacking in feminist sensibilities.

Bel canto opera is certainly not helped by the dearth these days of Italian singers. The American Charles Castronovo as Edgardo has a warm, finely-trained voice but did not enter the role as I recall Alfredo Kraus, a more stylish non-Italian, doing. The Marseille-born Ludovic Tézier sang Enrico heroically and earned great applause. Diana Damrau is incredibly committed and accomplished in the title role, though more dramatic than coloratura (with some high notes pushed). Peter Hoare as Normanno and Kwangchul Youn as Raimondo, despite fine voices, had little personality in their roles.

But can any be blamed for feeble or uneven characterisations when director Katie Mitchell has arbitrarily over-explained what she thinks is really going on to the point where the ideas inscribed in Donizetti’s music simply fail to fit? This is not Ms Mitchell’s first musically flawed show. Would that it were her last. Daniel Oren’s conducting was uninspiring, but he too faced insuperable odds. Donizetti’s score makes perfect sense; decked with improbably shocking irrelevancies everything flounders.