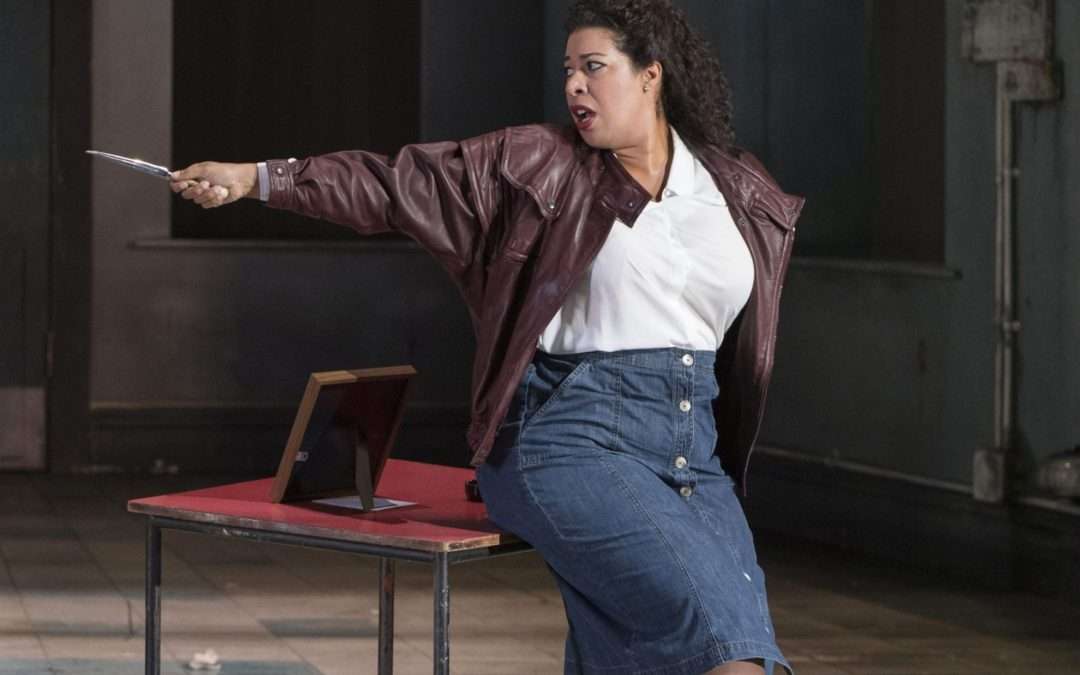 A plot in which an acclaimed military leader assassinates a head of state, seizes power and loses both moral compass and marbles has “contemporary relevance” written all over it. Similarly, the Act 4 chorus of refugees powerfully singing ‘Patria oppressa’ echoes today’s refugees from war zones, as they watch a large screen showing news reports of bombed and burning cities.

The chorus was well supported by the costume design (Annemarie Woods), choreography (Anna Morrissey) and direction (Oliver Mears, the ROH head-of-opera elect) in the Witches’ scenes. Grouped in three by costume, make-up and hair, each was more disturbing than the other, though no one appeared to have reached for the spirit gum and donned the beards to which Banquo (Miklós Sebestyén) bears witness. The opening of the drama was a rare example of synchronised arm gestures being brought off fairly successfully. The 20th century contained enough wickedness to rehabilitate such satanic elements as the Witches. So why is their return in the opening to Act 3 cast as a dream? The opera doesn’t present them as a nightmare but as a reality.

The overall stage look recalled a vandalised tenement hallway. The soldiers who enter during the first scene with news of the defeat of the rebels and Macbeth’s (Luis Cansino) first promotion look less like government troops than insurrection irregulars. Macduff (Bruce Sledge) keeps his fatigues on throughout. The contrast is the more striking with how shiny-clean Duncan (Stuart Hulse) is in the next scene. Very much the media-savvy clan chief, he poses for photographs with flags and children. Under this pose lies the same level of what Auden controversially called “the necessary murder” as the steps that will move Macbeth from warlord to king that very night. The mourning crowd dons berets and dark glasses as though for a 1980s IRA funeral.

Elsewhere the murderers hired to rub out Banquo are garbed as football hooligans or city gangs with a whiff of sectarianism. The fact that this production originated at Mears’s Northern Ireland Opera explains much of this.

A first-night downside was the pauses between scenes. It was quite nice to have Lady Macbeth’s kleptocratic collection of clothes and shoes on stage. But how long can that take? One pause was so long I wondered if a key player had gone sick or the lighting control console had blown a fuse.

The dominating force throughout was Mary Elizabeth Williams’ Lady Macbeth. Appropriately larger than her brave but indecisive husband, it wasn’t just her personality but also her voice that crushed all opposition. Even the excellent orchestra under Andriy Yurkevych had their work cut out.

The opera has its problems. Do you go for the 1847 or 1865 version? But more importantly, how do several singers build a character and communicate with the audience in roles which only sing once, or appear in only one scene. Miriam Murphy’s lady-in-waiting and Martin Lloyd’s doctor are obvious examples, but Malcolm (Simon Crosby Buttle) and Sebestyén’s Banquo are hardly better off.

The opera started well and powered through the evening. It ended a little weakly for two reasons. First, Lady Macbeth was dead. With that we lost a voice that deserved to be included in gale warnings on the shipping forecast, but also the one character we are really interested in. Second, the show’s concept finally unravelled. Mears doesn’t seem to get kingship, leaving the significance of the loss of Duncan in Act 1 undermined. The revenge of Fleance (Tomi Llewelyn – elsewhere an apparition in a cauldron) recalls an ISIS video. The return of Buttle’s Malcolm is thrown away. Good on darkness, this production did not come up into the light.