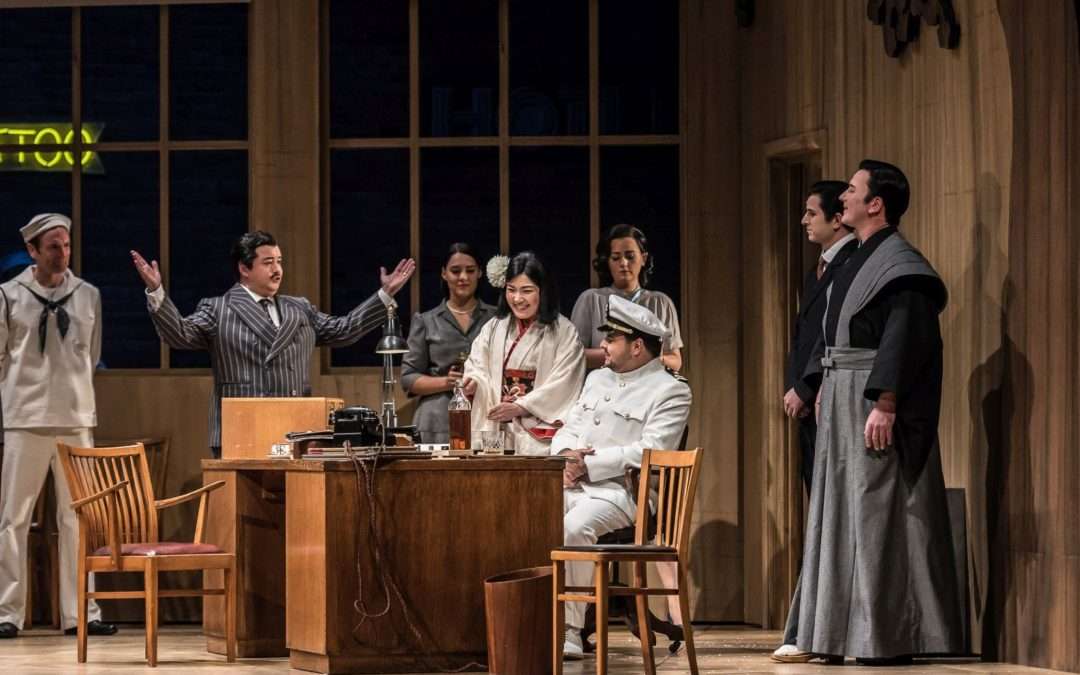 Glyndebourne’s tour is this year cut back to only two (immensely popular) operas: Puccini’s great weepy Madama Butterfly, in a new staging likely to transfer to the summer festival 2018, and Jonathan Kent’s Don Giovanni, created in 2010. There’s also a programme subtitled The essence of opera revealed to encourage newcomers to the art. The lucky towns are Milton Keynes, Canterbury, Norwich, Woking and Plymouth. But Glyndebourne is drawing in its horns a bit.

Perhaps abolishing Glyndebourne Touring Opera as a separate institution was a mistake. It launched British stars and had a distinctive character. In theory the tour is now “real Glyndebourne”. The casting of this new Butterfly is foreign, its stars’ singing sufficiently alluring. The publicity says Glyndebourne’s tour is “world-class opera”. Money is scarcer than ever. The tour also
promotes Glyndebourne transmissions (of the 2015 Festival production of Saul) in cinemas – as if watching on screen were sort of good enough; and it is by comparison a taste of opera on the cheap.

But I believe opera will only survive if people value it as a live experience. There have to be many performers and performances to ensure the great stars have a platform to emerge from. Opera also requires a continuing flow of all the auxiliary workers behind the scenes (as in live theatre) to continue to learn their trade. I fear an emphasis on opera recordings and opera screened (with agreeable but self-defeating intimacy thanks to carefully selected camera positions) will muddy the message – however useful it is to earn serious money from cinema transmissions.

Annilese Miskimmon’s new production is unwisely (in my view) updated to the 1950s. The trouble with her approach is that something happened at Nagasaki in 1945 which turns the whole style of what her performers do into the very opposite of verismo. An atom bomb fell. The 1950s really are an era when the story of Butterfly fits very uncomfortably.

The first act now takes place in the office or shop of the exploitative Goro, the “marriage broker” or pimp, who wears the sort of fur-collared coat Diaghilev liked. It seems odd that the American Consul has come here to meet Pinkerton, where the emphasis is not on domesticity but on financial arrangements and a booming trade. The audience must be able to believe that Lieutenant Pinkerton, however callous and careless of decency in some respects, is at least genuinely absorbed by the end of the act in a real romance with Cio-Cio-San. Setting these memorable scenes of japonaiserie in a ground-floor office in a town that was nuked a few years earlier does make one rather wonder.

Miskimmon does not trouble to soften Matteo Lippi’s US naval officer into less of a budding Donald Trump. It is Puccini’s genius to make us care about Butterfly, however deluded her attempt to become a proper American wife. Otherwise tears do not really flow. I find it also offensive and unconvincing to have so much cliché-Japanese female mincing around with tiny steps by Suzuki, Butterfly, her mother and cousin (when all wearing trad long-outdated Japanese clothes). In the 1950s would it really be credible for Michael Druiett’s Bonze – making his dramatic entrance pushed in a wheelchair which he does not then really seem to need – to command easy obedience when he insists Cio-Cio-San’s family abandon her for marrying a Yank?

The second act is in the house with a view and a tree but no threatening cherry blossom, the third act has a masked conservatory where Butterfly kills herself off-stage, then staggers on an collapses beside her son. Prince Yamadori’s wooing is highly improbable. Butterfly and Kate Pinkerton both wear hyper-smart 1950s brightly-coloured two-piece suits with little hats on their heads that look more as if they were intended for air stewardesses.

Despite John Wilson’s somewhat fussy conducting, Matteo Lippi (Pinkerton) settled down and sang rather well after a coarse start. Claudia Huckle was a touching and impassioned Suzuki. Francesco Verna’s Sharpless sounded good but with sloppy diction. Butterfly’s little son Sorrow at the opening night looked about six years old – though Pinkerton has been gone only three. Karah Son’s Cio-Cio-San sang very beautifully and cut a convincing figure – the proper thing.  Puccini’s music was as always spell-binding. But in such an unconvincing package verismo was the casualty.