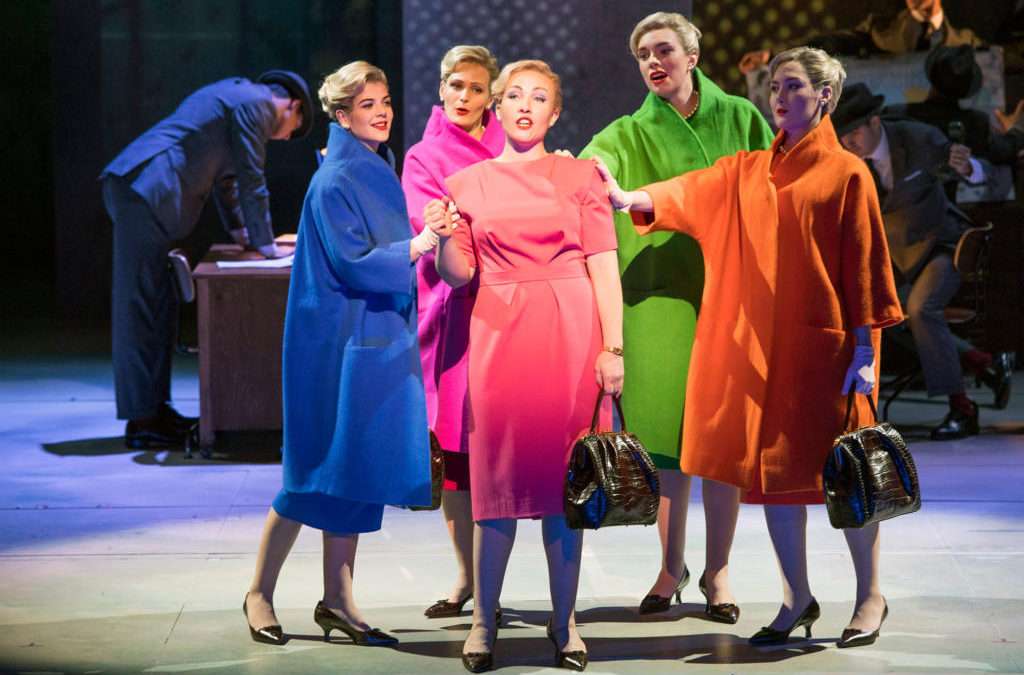 Nico Muhly’s opera is a gigantic achievement in every sense. A sprawling, complex, fascinating story feeds Nicholas Wright’s fine libretto with unusually well-rounded characters – and Muhly meets them with a score that glimmers and glows in all sorts of vivid and often beautiful ways.

Winston Graham’s novel and Hitchcock’s famous film (which reset the action in the US) tell of a disturbed young woman, emotionally frozen, who has become a compulsive thief and liar, repeatedly changing her identity. Filching cash from company after company, she wins our sympathy only when she takes the money to her mother – who instead of thanking her, accuses her of prostitution. It all catches up with her in 1959, Birmingham, as the chorus helpfully tell us at the start.

The Rutland brothers, who hate each other, attempt to seduce her in turn and the head honcho, Mark, falls in love with her; then, having caught her red-handed at the safe, blackmails her into marrying him. She is, of course, frigid. He brings her horse – the one creature in the world she genuinely loves – to live in their paddock, on condition that Marnie sees a psychoanalyst. Gradually, as the net closes in, the truth emerges: a terrible childhood trauma, triggered by what turns out to be a calamitous lie. Our anti-heroine has been pilfering to convince herself that crimes can be forgiven. As her heart begins to thaw and she finally faces the truth at her mother’s graveside, the police handcuff her. “I’m free!” she declares.

With no character all bad or all good, there’s a lot to squeeze in, and Wright and Muhly have managed it mostly very well. They have created a wealth of strong roles for the soloists. Marnie herself is a dream for a mezzo: strong, complicated, evolving, dramatic, beautifully written. The chorus’s use is a little more patchy, but it is awarded one of the outstanding moments: a reflection on the nature of guilt, relatively early in Act 1, where Muhly’s music is punchy, urgent and soaring by turns against a background of billowing clouds. Yet this hint of the Greek Chorus is never quite followed through; though later there’s a fun bar-scene involving a litany of hideous 1959 drinks (Liebfraumilch and soda? Eww…), I’d have liked more of the former.

Muhly has adopted a basis of the propulsive, repetitive rhythms of post-minimalism and deepens it with a dusky undertow of lyricism, keening strings and a pointillist layer of woodwind. Throughout, his compositional tone of voice provides the sympathy that is inevitably slow to emanate from the characters themselves. If he can produce this at 36, I look forward to hearing what he’ll be writing in 20 years’ time.

The issue of dramatic follow-through and cohesion is a big one, though; it’s not only that marvellous chorus that feels slightly disconnected. Act 1 ends with calamity: Mark’s attempted rape of Marnie, who escapes to the bathroom and slashes her wrists. Curtain. Yet as Act 2 opens, she’s putting on her make-up and having a relatively civilised discussion with him, and we are left to imagine how they might have got themselves from one state to the other. Through Act 2 the drama unfolds at quite a lick, yet left me hankering for a little more contrast between the musical responses to this rollercoaster of situations and feelings. Nevertheless, descriptive passages are strong – notably the hunt scene, with Marnie urging the fox to escape while English high society around her bays for the poor animal’s blood.

At times, especially in the first half, one might wonder if the tale is consequential enough for such lavish treatment; yes, nobody really knows anyone else and this is not an especially revelatory point to make. Still, my companion was moved to tears by Marnie’s plight; and in Act 2 I’d defy any animal-lover to witness the horse’s fate with a dry eye.

Sasha Cooke as Marnie carried the show with tremendous assurance, her warm mezzo tone edged suitably with steel. James Laing was suitably sinuous and sleazy as Mark’s highly unpleasant brother, Terry. Daniel Okulitch as Mark offered a powerful performance that showed the vulnerable points of this mother-dominated businessman, and Lesley Garrett convinced utterly as that mother (one can’t help but remember the transformation of hectoring mother-in-law into Queen of the Night in Amadeus).

So, even if certain aspects could have been handled differently, Marnie is that rare creature, a magnificent new opera with strong drama, some beautiful music, and the potential to reach a giant audience. Since the long post-war period in which much contemporary music-drama was accused of (to paraphrase) being up itself and failing to connect with an audience, there’s been a new wave of operatic fresh air that exists for its attendees and its performers as much as for its creators and commissioners, ushered in, arguably, by Nixon in China and Satyagraha. Marnie confirms this direction and consolidates its worth.