The Marriage of Figaro/Figaro Gets a Divorce, Welsh National Opera, Wales Millennium Centre 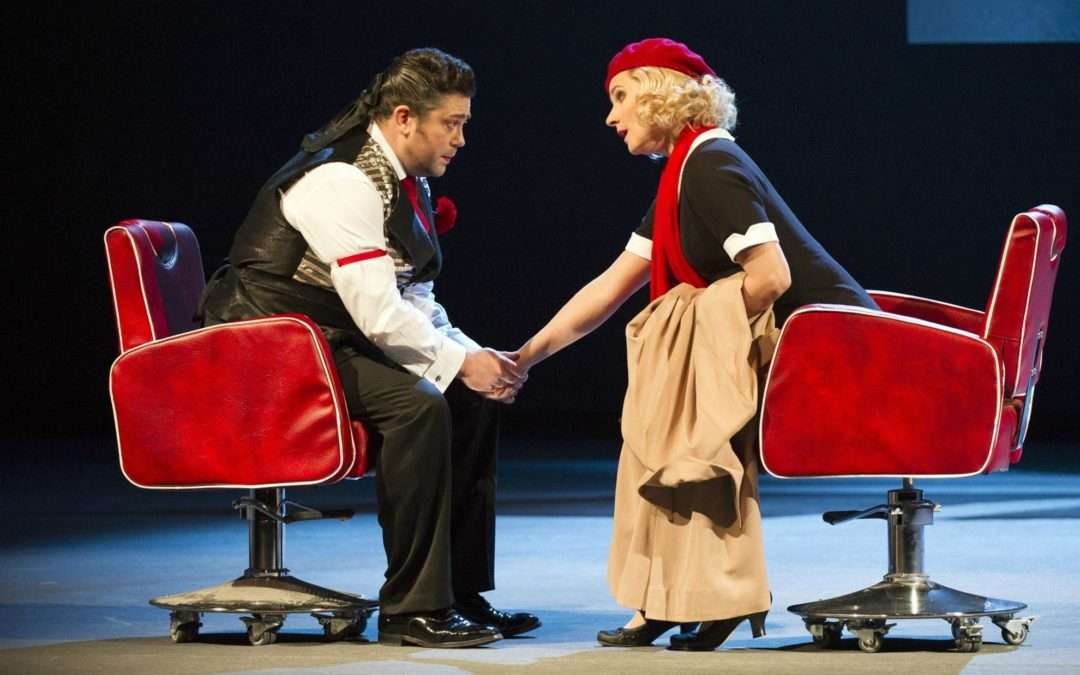 Even before Welsh National Opera’s orchestra under Lothar Koenigs strikes up the overture to The Marriage of Figaro, members of the cast in modern dress are on stage, reading or stretching as if for a work-out. Enter Figaro in 18th-century dress: he shows them the contents of the costume hampers and shepherds them offstage. Yes, it’s a dumb show, intended to provide some kind of framing device.

After the pointless visual obbligato, things cheer up a good deal. The costumes imitate those of the period in which the drama is set. Combine them with wigs and make-up, and the overall look drifts towards pantomime: Marcellina (Susan Bickley) and Don Bartolo (Richard Wiegold) turn out to be excellent Ugly Sisters.

The sets by contrast are all greys and whites in a largely abstract collage. Furniture and props are minimal and little referenced: the ironing board of the opening scene stands untouched until reprised in Figaro Gets a Divorce.

Anna Devin, making her WNO debut, was an alert and attractive Susanna from the beginning. Her duel of wits and mock politeness with Bickley crackled with ill-disguised ferocity.

The classic farce scene in which Susanna and Cherubino hide leads to the drama’s first ensemble, a quartet in which the conflicting intentions and emotions are miraculously harmonised.

After Figaro’s carefully staged choral number flattering the Count, things ground to a halt for a length and surely avoidable scene change. Given that the production is not a proscenium-arch trompe-l’œil affair laden with furniture, it’s not clear why setting up the Countess’s bedroom need be so laborious. Still, Elizabeth Watts’s ‘Porgi, amor’ when we got there was a pin-drop moment and gained the evening’s biggest applause. A former Susanna herself, she was one of the evening’s undoubted stars.

Susanna and the Countess set about cross-dressing Cherubino (Naomi O’Connell singing well but needing better directing). This can’t have the same impact on a modern audience as it did at the time: gender assumptions and costume have changed too much. Similarly the issue of age isn’t the same: Marcellina is young enough to join a dating agency. Social class remains the big unaltered fact for a modern audience.

Alan Oke having rung in sick, chorus tenor Michael Clifton Thompson was given a battlefield commission and took over as Don Basilio, doubling as Don Curzio, and deserves mentioning in despatches. He sang and acted with real character, not just going through the motions. David Stout’s Figaro and Mark Stone’s Count were creditable, but it was the sopranos who got the audience vote.

To complete the Figaro trilogy, rather than reviving Milhaud’s setting of Beaumarchais’ little-known La mère coupable, Welsh National Opera commissioned Elena Langer to work from director David Pountney’s new libretto. The Beaumarchais plot broadly survives in Figaro Gets a Divorce: the Countess has still had a fling with Cherubino and their son has been brought up by the unwitting Count as his own. The Count still has an illegitimate daughter (a white-clad Rhian Lois making her WNO debut), whom a mysterious Major wants to carry off. The confusingly parented youngsters are still in love. But the action is relocated to an unnamed post-revolutionary state where the Almavivas are on the run.

David Stout’s Figaro is still plotting but there is a new bitterness to the character and a darkness to the voice. He has left the Almavivas’ service and sets up a barber’s shop, where the atmosphere is more reminiscent of Sondheim’s than Rossini’s haircutting scenes. The music channels Weill at this point.

Marie Arnet’s childless Susanna has lost patience with her husband. She leaves him and takes refuge in a bar where she is served by Andrew Watts, who with dress and wig removed turns out to be ‘The Cherub’, indeed Cherubino, the proprietor. Susanna agrees to appear in his show.

Naomi O’Connell from Le nozze returns, betrousered as the Countess’s son Serafin; the role suits her better than did Cherubino. Mark Stone’s Count tries to send him off to the army. The Count is gambling his way through the portable wealth the family has carried with them, encouraged by Alan Oke’s Major. The latter is the story’s brooding presence, a relative of Nick Shadow, Samiel or Iago. He is given a lot of opportunity for singing softly, high in his range. He plans the Almaviva family’s downfall, showing Serafin a letter from the Count. The three sing an imaginative trio, the text of the letter set to a hocketing melody.

Elizabeth Watts’s Countess (again a strong performance) tries to defeat the Major by telling her husband the truth.

The family take shelter in their old castle, now an asylum. In a scene reminiscent of Genet, the family pretends to be suffering from the delusion that they are the noble Almaviva family. Two couples flee again. Susanna (now pregnant after an affair with Cherubino, whom Figaro has shot) is back with her husband. Serafin and Angelika also escape. But this time the reconciled Count and Countess decide not to run further. The opera ends with them resigned to their fate.

This rather bleak tale unfolds on a rather bleak stage, with the continuing theme of grey and white collage, including doing duty for peeling wallpaper in the dismal hotel to which the family moves as the money runs out.

Elena Langer’s post-modern score deserves decent audiences. There is some painfully obvious word-painting; but there were very good pairings of voices and instruments, and it managed to keep the first-night audience on side.