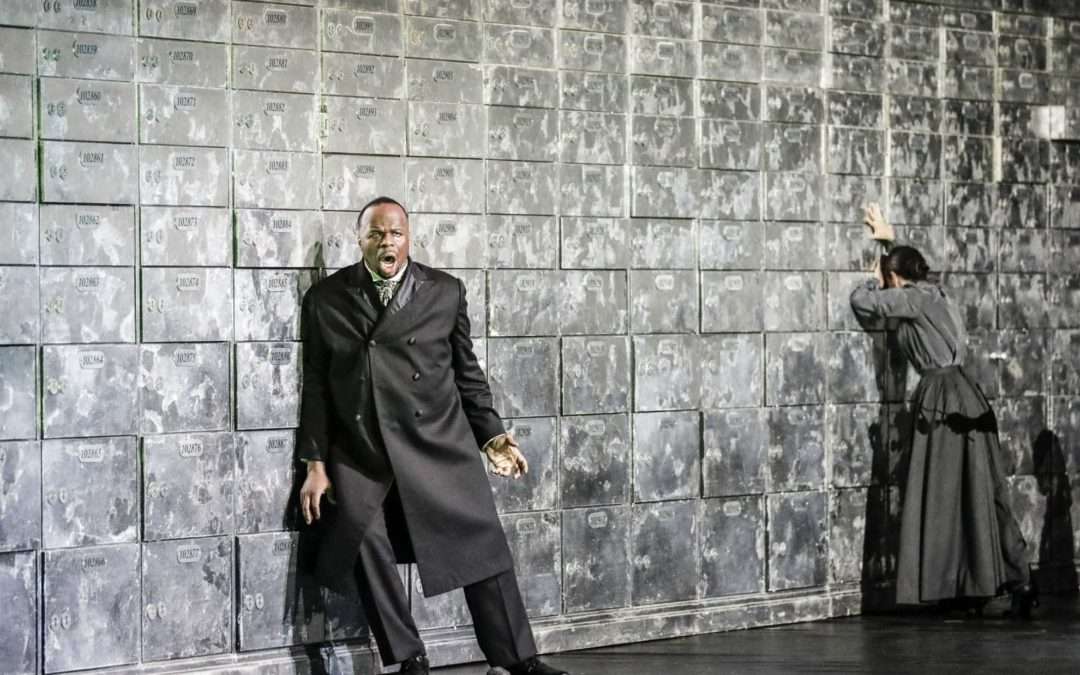 Lester Lynch as Shylock in WNO's The Merchant of Venice. (C) Johan Persson

Despite the fact that the opera was largely written in the 1970s and intended for ENO, the WNO production of André Tchaikowsky’s Merchant of Venice is a UK premiere. It recycles Keith Warner’s production for the 2013 Bregenz Festival, which was released on DVD by Euroarts; the staff director here is Jack Furness.

The set (Ashley Martin-Davis) is a mix of doors and strong-boxes, as though the action were taking place in the vault of a Swiss bank. The casket scene makes use of a set of three large safes. The princes of Aragon and Morocco are dancers not singers, and the scene more pantomime than mime.

Martin-Davis’s costumes resemble an Edwardian costume drama, with the exception of the male rowdies on the night of Jessica’s escape, who are togged as SA troopers without the armbands. The carnival crowds (the means of getting a chorus into the score) also include a group whose costumes, despite being black, might be modelled on a Ku Klux Klan rally or perhaps Goya’s drawings ‘For Being of Jewish Ancestry’. Casting black singers as both Shylock and Jessica further raises the profile of ethnicity. (Including Brownshirts seems heavy-handed.)

Shakespeare’s plot would have possessed an obvious appeal to the composer, a Polish Jew who had survived a childhood in the Warsaw ghetto. At seven he was dressed as a girl, dyed blonde and led to safety by a grandmother with nerves of steel and given a differently spelt version of the name by which he is now known (up to then he had been Robert Andrzej Krauthammer).

In addition to anti-Semitism, there are matters of courtship and marriage, friendship, gender and sexuality. The production foregrounds the intense relationship between Antonio (Martin Wölfel, making his WNO debut) and Bassanio (Mark Le Brocq). Antonio’s opening aria about depression sees Wölfel lying on a couch with a Freud lookalike, cigar in hand, listening sagely. This scene is reprised in dumbshow at the end to wrap things up for the bachelor while the plot’s three couples exeunt to live happily ever after – or not.

In addition to the closeness of Antonio and Bassanio, on this stage the intimacy between Portia (Sarah Castle) and her companion Nerissa (Verena Gunz) is more demonstratively physical than their lines would seem to justify. But the isolating of Jessica (Lauren Michelle, a 2015 Cardiff Singer finalist in her first appearance with WNO) after her elopement with Lorenzo (Bruce Sledge) feels more pronounced in this network of close friendships. A visual pun on Marlene Dietrich gives the production its second reference to Weimar Germany.

The part of Shylock, on which the whole opera depends, is taken by baritone Lester Lynch, another WNO debutant. His rich voice contrasts with Wölfel’s smooth, cool countertenor. Had Wölfel’s part been largely marked mezzo-piano? It certainly seemed so, but though musically odd, this proved curiously appropriate for the directionless, semi-detached Antonio. The whole presence of the two is as contrasted as their voices, as Wölfel glides where Lynch stamps.

Librettist John O’Brien slims Shakespeare down slightly, but retains enough named characters for this to be an ensemble piece. Salerio (Simon Thorpe) and Solanio (Gary Griffiths) make an excellently repellent pair of tabloid journalists, opening the first half by joshing Antonio and the second half by taunting Shylock. Gratiano (David Stout) makes good use of the Edwardian setting to present himself as a cad on the make. The doge (Miklós Sebestyén) struggles to maintain the dignity of a court which a disguised Portia and Nerissa are in danger of turning into a circus. Soprano Sarah Castle makes the transition from orphan heiress in Act 2 to the disguised defence lawyer in Act 3. If anything, the latter suited her rather better.

The music lies somewhere in a Berg-Britten continuum. It is impassioned and has some witty moments, including unexpected and genuinely funny quotations. It certainly justifies the decision to programme it. It has a lot to offer singers, instrumentalists and audiences.

All credit to the orchestra and conductor Lionel Friend – hats off also to WNO for imaginative programming. Lining up Verdi, Tchaikowsky and Cole Porter is surely one of the more outside-the-box responses we’ve seen to Shakespeare’s 400th.