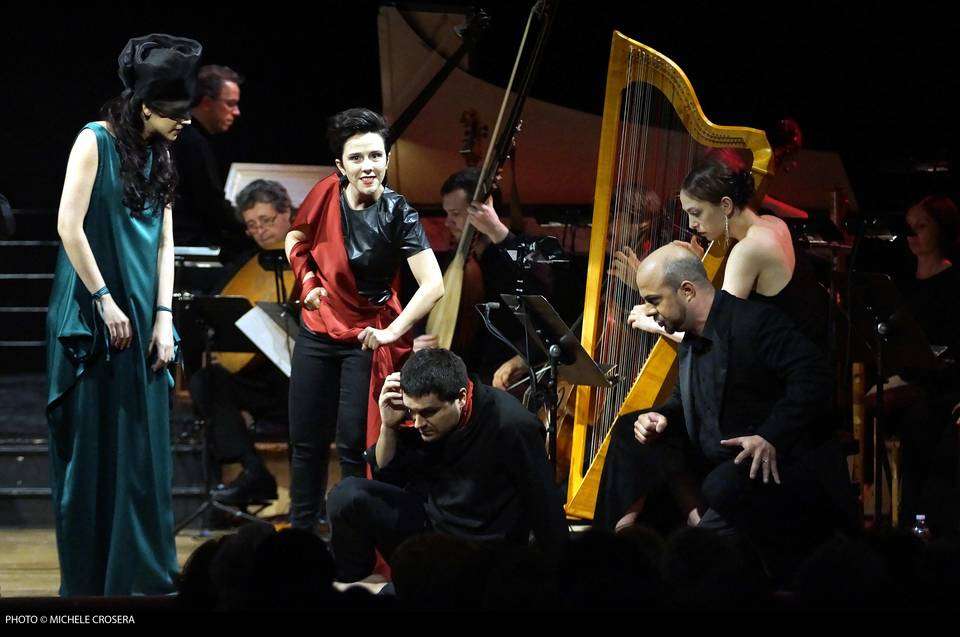 At the top of my Christmas highlights is John Eliot Gardiner’s trio of Monteverdi operas, compressed into an evening of music at the V&A to coincide with the Opera: Passion, Power & Politics exhibition.

Throughout 2017 the Monteverdi Choir and Orchestra have been celebrating the composer’s 450th anniversary with a tour of his three surviving operas – L’Orfeo, Il ritorno d’Ulisse in patria and L’incoronazione di Poppea – performed in venues from Venice to Bratislava, with Bristol and Edinburgh the only UK cities to host the trilogy. By all accounts they were musically superb, and this curtain-closing concert gave some idea of what we missed.

Gardiner and lighting designer Rick Fisher staged pop-up performances around the ground-floor galleries, like private concerts in a Venetian palazzo, which drew in the Friday-Night-Late audience as well as those who had tickets for the sit-down concert. The English Baroque Soloists heralded the start of the evening from the golden-lit balcony above the Great Hall with the Toccata from Orfeo. Then, calling to each other from balconies above the Medieval galleries, Peter Davoren, Gareth Treseder and Krystian Adam allowed the melodies of ‘Duo Seraphim’ from the Vespers to float up to the arched roof, as resonant as any cathedral. Under the patient gaze of Madonnas in the Renaissance galleries, sonorous baritone Furio Zanassi as Ulysses railed against his fate. As the musical promenade went on it grew harder to find a space in the smaller rooms, but I heard ‘Pulchra es’ from sopranos Francesca Boncompagni and Silvia Frigato floating into the crowded corridor.

The formal part of the evening, a concert of what Gardiner called “bleeding chunks”, took place in the Raphael Cartoon Gallery. Once again we heard the Toccata, which led into extracts from L’Orfeo, Il ritorno d’Ulisse and Poppea. Inevitably the selections of arias, recitative and choruses made little narrative sense and some of the longer passages, especially ‘Possente spirto’, lost some impact without the dramatic events that preceded them. In the diffuse acoustic of the gallery, the tenors had mixed success – as Orfeo, Krystian Adam’s soft-grained voice disappeared into the ether, whereas Francisco Fernandez-Rueda’s spiky Pastore and Robert Burt’s robust Iro cut through. The counter-tenors had no such problems – Carlo Vistoli was a plaintive Ottone and Reginald Mobley an affecting Nurse and Nerone. The evening closed with the meltingly beautiful ‘Pur ti miro’ sung by Mobley and Boncompagni – everybody’s favourite Monteverdi duet, even if it may not actually have been written by Monteverdi.

Gardiner beamed out at the audience, delighted to be back at the V&A where he celebrated Monteverdi’s 400th anniversary with his newly-formed Monteverdi Choir 50 years ago. They are still at the forefront of period performance but have colonised several more centuries of music in the interim – next year’s tour ranges from Bach Cantatas to the Verdi Requiem.