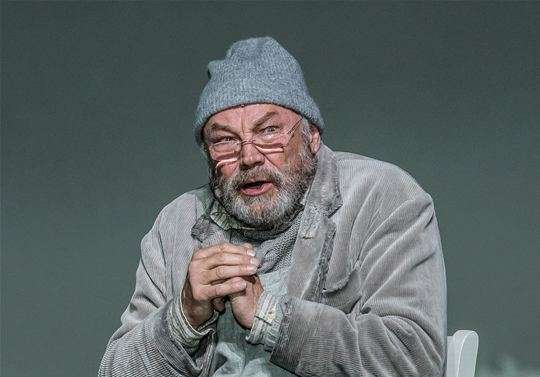 From Morning to Yawning

John Fosse converted to Roman Catholicism in 2013 (having been a member of the Lutheran Church of Norway, which is rather like the C of E in its range of semi-Catholic varieties of Protestantism). I guess his 2001 novel Morning and Evening – the basis of the libretto he has crafted for Georg Friedrich Haas’s new opera, premiered at Covent Garden last Friday – should be seen as a product of his religious understanding. It is about people who are or may be about to be dead. That, no doubt, is characteristic of every person in every opera there has ever been. Fosse treats them as if they were actually living, while conscientiously finding nothing much to say about them; which is the whole point. It scrupulously avoids telling us anything about them that is at all interesting.

The last I saw of Fosse was the two-hander that was Patrice Chéreau’s last ever production, I Am the Wind (seen at the Young Vic in May 2011), which was about two men on a boat going nowhere much but talking a lot about it and about each other without giving anything away. If you find this sort of thing profound, you will have done what Fosse wants: filled in the space yourself that he consciously leaves for profundity, deep feeling and sensitivity.

I find myself firmly resistant to all this meandering stuff about mundane yet vaguely spiritual feelings. But as a whole, with Haas’s demonstrative and sometimes quite tempestuously expressive music, and with Graham Vick’s stylish and thoughtful direction and designer Richard Hudson’s grey cloud-inspired spaces, costumes and atmospheres – not to mention the superb delivery of actor Klaus Maria Brandauer (as the father of the child who became the man whose imminent and undramatic death we contemplate through most of the rest of the work and whose monologue stretches through the first third of the evening mixing with the music), nor either to forget the singers in the cast: pure soprano Helena Rasker as Erna the man’s wife, luscious mezzo Sarah Wegener as the man’s daughter Signe and also as the midwife who brought him forth, and the fine urbane baritone Christophe Pohl as the man the child became, and Will Hartmann as his fisherman mate Peter, this is in truth a very classy show.

It’s just not one I would ever want to repeat as an experience.

Haas’s music is inventive and carefully suited to Fosse’s purpose and does create that sort of implicit world redolent of various happenings that people who like this sort of thing will take as meaningful. If on the other hand like me you find Verdi and Wagner and Handel and Mozart meaningful you may well struggle to keep awake, even though you find absolutely nothing offensive about the way the music stands up the scenes and the futile debate which the text is having with the writer about the nature of meaning – or something like that. There’s an offstage choir that is less exciting than the weather in Rigoletto, but quite effective as a musical device. One’s attention is held. Also by the characters, in spite of one’s not really wanting to be spending so much time with them. But it does only take 90 minutes and one waits without suffering too much boredom to see how serious it gets. Which is only as serious as the idea of death being a mysterious passage to something other and eternal, rather than the simple full stop that seems so much more appropriate to our finite understandings.

A bigger mystery was why the Royal Opera picked up on this unusual but in no way British or particularly operatic co-production joint venture with the Deutsche Oper, Berlin. Presumably it confirms or confers “international” status.